A Pure Sacrifice: Why the Mass Isn’t Just Symbolic

Mike Aquilina is executive vice-president of the St. Paul Center and a contributing editor for Angelus News. He is author of more than fifty books, including The Eucharist Foretold: The Lost Prophecy of Malachi.

Whenever the early Christians talked about the Mass, that prophecy from Malachi was sure to come up. The Mass, they believed, was its obvious fulfillment.

Malachi looked at the future and saw no more sacrifices at the Temple. Instead, the whole world was making a pure offering to the God of Israel. And that’s what we do, Christians have always said. To us, this pure offering is obviously the Eucharist; this is the way Christians have read Malachi from at least the Didache on.

But if what we took away from all this was that Christianity had abolished the sacrifices of the Law, we’d be making a big mistake—and a potentially terrible one. Over and over the Fathers tell us what Christ himself told us: Christ came not to abolish the sacrificial system of Israel but to fulfill it.

As the New Testament tells us more than once, Christ’s is the once-for-all sacrifice. That sacrifice is consummated on the cross, but Jesus actually makes the offering at the Last Supper. That’s where he establishes what St. Thomas Aquinas would call the “newer rites of grace” as his memorial.

What does he offer? In signs, a “body” separated from its “blood.” It’s a priestly and sacrificial action that reminds us of the Temple liturgy. The New Testament vocabulary associated with this rite—offering, memorial, communion—is largely drawn from the language of sacrifice. And this dimension of the liturgy is what dominates the thought of the earliest Fathers, especially Clement of Rome, Ignatius of Antioch, Irenaeus, and Cyprian.

The American biblical scholar Scott Hahn has often said that Christ’s Passion on earth is an image of the Son’s eternal offering of himself in love to the Father. Theologians say that any small movement of Jesus’ will during his earthly ministry would have been grace enough to redeem the world. But his whole life is taken up (and, as he put it, laid down) in his self-offering at the first Eucharist. He was laying down his life for his friends.

And our lives, in communion with his, are laid down on the altar in every Mass. Everything we do on earth—work, family, leisure—is taken up in the sacrifice. This is enacted symbolically through the rite.

But it’s not just symbolic. The sign stands for a reality. “I am the living bread which came down from heaven; if any one eats of this bread, he will live forever; and the bread which I shall give for the life of the world is my flesh” (John 6:51). Jesus refused to leave the purely symbolic interpretation open: “For my flesh is food indeed, and my blood is drink indeed. He who eats my flesh and drinks my blood abides in me, and I in him” (John 6:55–56).

Why would it be such a terrible mistake to miss the point that Jesus fulfilled rather than abolished the sacrifices of the Law?

It would be bad because it would miss Jesus’ own interpretation of his saving work: “And beginning with Moses and all the prophets, he interpreted to them in all the scriptures the things concerning himself” (Luke 24:27). For Jesus, the “scriptures”—what we call the Old Testament—were all pointing forward to his sacrifice.

Furthermore, it would render the Old Testament irrelevant at best and perhaps even false or misleading. We might even come to the conclusion that the God of the Old Testament, who wanted all those bloody sacrifices, was a different God entirely, whose concerns had nothing at all to do with what Jesus taught. Exactly that idea came up very early in the history of Christianity, most famously taught by a man named Marcion. This man told his followers that the God of the Old Testament was a wicked and inferior deity, and Jesus had come to earth to free us from his tyranny and introduce us to the previously unknown good God. It was the wicked Old Testament God who had created the universe, which meant that everything in it was evil. You can see how that would lead us badly astray.

Family feuds are often bitter, and Christians and Jews are one family. We have an important disagreement about one important question: whether the messianic age is now or yet to come. But, just like in most family discrepancies, the terms of the argument make no sense to someone outside the family. The very fact that we disagree about this thing that makes no sense to outsiders shows that we are one people.

When we forget this identity, terrible things can happen.

That’s why, even if for no other reason, it’s essential to remember that Christ did not abolish the Old Testament sacrifices. What happened was what Malachi and the other prophets had foreseen hundreds of years earlier: in the age of the Messiah, the nations would recognize the God of Israel, and instead of the imperfect sacrifices offered at the Temple, one pure sacrifice would be offered around the world, from the rising of the sun to its setting. The Temple sacrifices would fade away—not because they were abolished but because their purpose had finally been fulfilled in a perfect way. 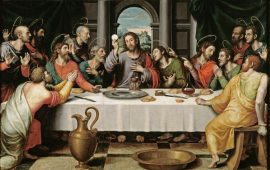 Grow in devotion to the Blessed Sacrament and your love for the True Presence as we return to Mass—celebrate the great Feast of Corpus Christi with a special event focused on the Real Presence!

From June 10 to June 13, join Scott Hahn, John Bergsma, Mike Aquilina, and Fr. Boniface Hicks, OSB, for four days of reflection in Real Presence: The Eucharist in Scripture and the Early Church.