Rachael Marie Collins  was an Associate (judicial clerk) at the High Court of Australia and was admitted to the bar in New York where she worked for Clifford Chance L.L.P. She is the author of Called by God: Discernment and Preparation for Religious Life.

When St. Thomas More discerned whether he should become a priest, he did so by engaging in “exercises of piety, looking to and pondering on the priesthood in vigils, fasts, and prayers, and similar austerities.” In other words, his discernment was a form of preparation—he entered deeply into the spiritual life and, in doing so, obtained an answer as to his vocation.

His biographer notes that the saint was more thoroughly prepared for the priesthood than most candidates who do enter. Not knowing whether he had the strength to live chastely, St. Thomas More followed the advice of St. Paul (1 Cor 7) and entered into marriage: “The one thing that prevented him from giving himself to that kind of life was that he could not shake off the desire of the married state. He chose, therefore, to be a chaste husband rather than an impure priest.”

St. Teresa of the Andes also discerned through preparation. She entered the Carmel of Los Andes in Chile at age nineteen, having spent four or more years preparing for religious life. On her fifteenth birthday, she wrote that “the future hasn’t been revealed to me, yet Jesus has pulled back the curtain and I have glimpsed the beautiful shores of Carmel.” She “embarked on a very structured prayer life,” through which she strove to be a “Carmelite in the world.”

During this time, Teresa often experienced great dryness and aridity in her prayer life. Nevertheless, she attended daily Mass, spent time in prayer, dutifully fulfilled her obligations as a student, served others with love, and cheerfully made sacrifices for the conversion of sinners. She considered herself “betrothed” to Jesus and offered gifts of sacrifice and prayer to Him as part of their courtship:

Every sacrifice made is small compared with the value of one soul. God gave His life for them, yet how we disregard their salvation. As one betrothed to Him, I must thirst for souls, and offer my Espoused the bloodshed for each of them. And how can we win these souls? Prayer, mortification and suffering.

She did this so well that when she did enter religious life, Our Lord kept her in Carmel for a mere ten months before calling her to heaven. She died having scaled the uppermost heights of sanctity.

Follow the examples of St. Thomas More and St. Teresa of the Andes. If you feel an attraction for the religious life or wonder whether it might be for you, then prepare for it. Act as if you are called. Say a prayer of obstruction and take all the necessary steps to enter. This is how you discern.

Approaching discernment in this way will help you remain peaceful and detached. Try to be detached about your need for certainty. When you ask Him for light regarding your vocation, He hears you and He will respond. Perhaps not when you want Him to respond, but He will do so in His time. He will guide you in this.

Pray to God for the strength, wisdom, and generosity to get on with the task of preparing for and entering religious life. And then start. There is nothing more important than this. 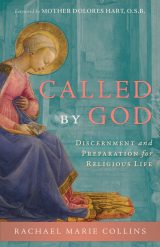 In Called by God: Discernment and Preparation for Religious Life, Rachael Marie Collins provides an overview of the spiritual life—both its joys and its challenges—and guides women as they discern whether they are called to be religious sisters or nuns.