All Things in Moderation: Balancing Work and Personal Life

Andreas Widmer is Director of Entrepreneurship Programs at The Catholic University of America and President of The Carpenter’s Fund. He was previously the co-founder of SEVEN Fund, a philanthropic organization run by entrepreneurs who invested in original research, books, and films to further enterprise solutions to poverty. He is the author of The Pope & the CEO: John Paul II's Leadership Lessons to a Young Swiss Guard.

You’ve heard it before, and it’s true: All things in moderation. That’s the first key to living a balanced life. When applied to work and your personal life it means pretty much the same thing as when it is applied to diet. Consider eating in moderation: should you eat carrots or cookies? The two aren’t mutually exclusive. Over the long-term, most people can’t eat only one. You need both carrots and cookies in a balanced diet, and you need both work and a personal life in order to become the person God created you to be. They are intended, in fact, to be complementary, each building on the other and enriching the other.

John Paul understood that. That’s why he made time each day for the essentials—prayer, sleep, meals, work, and exercise. He never skipped any of those things. That’s also why his week and his month always included scheduled time for recreation—time for reading, listening to music, and staying in touch with friends. It’s why annually there were always vacations—extended periods of relaxation where he could do what he loved the most with those whom he cared about the most. John Paul II knew that only by making time for everything in his schedule could he do what was expected of him as pope and do it well.

In the sixth century, Saint Benedict said pretty much the same thing when he was writing out the rule for his monks. “Let all things be done with moderation” he writes. According to Benedict, everything must be given its due, but only its due. There should be something of everything and not too much of anything. Because he was focused on the life of religious men, the balance he was trying to help them find was between work and prayer. That balance was necessary, he believed, because each activity supported and illuminated the other. We need prayer, he said, in order to understand why we’re working, just as we need work to help us achieve the order and harmony that sustains our prayer lives. Likewise, he believed that the monks needed to learn to approach prayer with the same determination with which they approached work, recognizing that perfection in anything requires practice.

Benedict also had strong opinions about the rest of what went on in a monk’s life. Eating, drinking, sleeping, relaxing, hospitality—all of that was accounted for in his rule. Each of those activities, he asserted, was important to a well-ordered life, as long as they were enjoyed in moderation. To indulge in any at the expense of the others, was asking for trouble.

Benedict’s wisdom works just as well for executives in the twenty-first century as it did for monks in the sixth century. In order to be successful, you need to see your work and personal life as two sides of the same coin, as mutually supportive, not mutually exclusive realities. You also need to make sure you schedule time for all that goes into a healthy, happy, productive life. That includes the essential activities for healthy bodies—eating, sleeping, and exercising—as well as the essential activities for healthy souls— spending time with family and friends, praying, reading, and watching the occasional movie or basketball game.

When you approach life with the attitude of “all things in moderation,” you avoid the anxiety that comes with feeling like you’ll never be able to do something you care about. You also avoid overindulging in something that you don’t often get to do. You don’t sleep too much on the weekends, because you get plenty of sleep during the week. You don’t eat too much at dinner, because you made sure to eat breakfast and lunch. You don’t spend every night working late at the office, because you know you’ll be back there tomorrow and the budget you’re working on isn’t going anywhere.

Basically, the “all things in moderation” approach forces you to step back from the urgent concerns of each moment and get a bird’s eye view of life. It helps you distinguish between the important and the urgent, to recognize what really needs to be done now and what can wait until later. It’s an attitude that stems panic and gives you the courage to face problems, not run from them. It also helps you live in the moment. 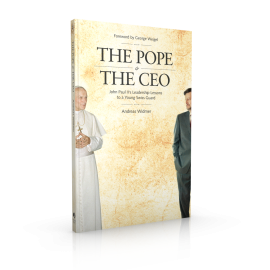 The Pope & the CEO: John Paul II’s Leadership Lessons to a Young Swiss Guard is a guidebook for people seeking to integrate faith into all aspects of their lives—particularly their professional work. Inspired by the role Pope St. John Paul II played in the life of Andreas Widmer, a former Swiss Guard, The Pope & the CEO outlines key principles of successful leadership for executives, CEOs, entrepreneurs, small business owners, or any leader in the workplace.