Aquinas: The Biblical Approach of the Model Catholic Theologian 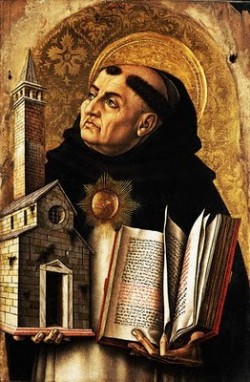 Today is the Feast Day of St. Thomas Aquinas! In honor of that, I thought I’d cover some ground I’ve been over before, namely, Thomas’ role as a model of Catholic theology and his primary focus on Scripture. Perhaps most striking—at least to some—is Thomas’ insistence on the priority of the literal-historical sense of Scripture.

In short, for Thomas Theology is a Scriptural enterprise. Since he’s consistently held out as the model, Catholic theologians should be sure to, likewise, make “the study of the sacred page. . . the very soul of theology&rrdquo (Vatican II, Dei Verbum, 24).

Throughout the ages, Thomas’ work has consistently been held out as a model for Catholic theology by the Catholic Church. Consider some of the following quotes from various popes. I’ve added some italics.

Pope John Innocent VI, Serm. De. St. Thomas (c. 1352): “[Thomas’] teaching above that of others, the canonical writings alone excepted, enjoys such a precision of language an order of matters, a truth of conclusions, that those who hold to it are never found swerving from the path of truth, and he who dare assail it will always be suspected of error.”

Pope Leo XIII, Aeterni Patris (On the Restoration of Christian Philosophy), 17, 19(1879): “Among the Scholastic Doctors, the chief and master of all towers Aquinas, who, as Cajetan observes, because ‘he most venerated the ancient doctors of the Church, in a certain way seems to inherited the intellect of all’ [cited in Pius XI, Stud. Ducem. #5]… he is rightly and deservedly esteemed the special bulwark and glory of the Catholic faith. With his spirit at once humble and swift, his memory ready and tenacious, his life spotless throughout, a love of truth for its own sake, richly endowed with human and divine science, like the sun he heated the world with the warmth of his virtues and filled it with the splendor of his teaching.
. . . Moreover, the Angelic Doctor… single-handed… victoriously combated the errors of former times, and supplied invincible arms to put those to rout which might in aftertimes spring up.”

Pope Leo XIII, Depuis le jour (On the Education of Clergy), VI, 100: “The book par excellence whence students can study Scholastic Theology with much profit is the Summa Theologiae of St. Thomas Aquinas… It is our wish, therefore, that professors be sure to explain to all their pupils its method, as well as the principle articles relating to Catholic faith.”

Pope St. Pius X, In praecipius to the Roman Academy, I, 124: “Indeed, those principles of wisdom useful for all time, which the holy Fathers and Doctors passed on to us, have been organized by no one more aptly than by Thomas, and no one has explained them more clearly.”
Pius XI, Studiorum Ducem, 11 (1923): “. . . Thomas should be called not only the Angelic, but also the Common or Universal Doctor of the Church…”

Pope John Paul II, Fides et Ratio (1998), 78: “It should be clear… why the magisterium has repeatedly acclaimed the merits of St. Thomas’ thought and made him the guide and model for theological studies… The magisterium’s intention has always been to show how St. Thomas is an authentic model for all who seek the truth. In his thinking, the demands of reason and the power of faith found the most elevated synthesis ever attained by human thought.”

St. Thomas as a Biblical Theologian and His View of the Literal Sense

While Thomas’ importance is seldom disputed, what is often overlooked is the fact that for Thomas, the study of Theology was to be first and foremost a biblical exercise. An excellent overview can be found in Christopher Baglow, “Rediscovering St. Thomas Aquinas as Biblical Theologian,” Letter & Spirit 1 (2005): 137-146. You can purchase the volume here(it is full of a number of other excellent articles, including one by my friend and co-blogger, Brant Pitre).

Baglow begins by pointing out that, as many scholars explain, for Thomas there is a “unity between sacred Scripture and sacred doctrine” (137). He goes on to cite Thomas Aquinas, who wrote, “Only the canonical scriptures are the standard of faith (sola canonica scriptura est regula fidei)” (141).

Baglow highlights Thomas’ treatment of Scripture in article ten of the first question of the Prima Pars of his famous Summa Theologica:

The multiplicity of these senses does not produce equivocation or any other kind of multiplicity, seeing that these senses are not multiplied because one word signifies several things, but because the things signified by the words can be themselves types of other things. Thus in Holy Writ no confusion results, for all the senses are founded on one — the literal — from which alone can any argument be drawn, and not from those intended in allegory, as Augustine says (Epis. 48). Nevertheless, nothing of Holy Scripture perishes on account of this, since nothing necessary to faith is contained under the spiritual sense which is not elsewhere put forward by the Scripture in its literal sense.

Expounding on this passage, Baglow writes:

Suffice it to say, this is probably not what most people expect from St. Thomas. In fact, Thomas’s strong biblical emphasis is positively shocking to many Christians who have never read him. To those who think Catholicism ignores Scripture, think again: this is the man the Church holds up as the model of Catholic theology!

In particular, I’d recommend his commentaries on biblical books to those interested in Scripture study. They are an absolute gold mine.

On this, the feast of St. Thomas Aquinas, why not check them out?