Are War and Schism always Sins Against Charity? 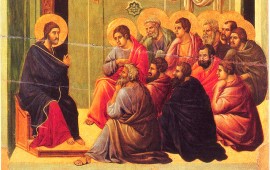 What would happen if, through some bending of the space-time continuum, it were possible to bring together at a conference table contemporary literary critics, theologians, and biblical scholars such as Harold Bloom, John Howard Yoder, and Richard Hays, as well as the common and angelic doctor, St. Thomas Aquinas? What would be the result if these interlocutors were to take as their topic of discussion not only “love” in the abstract, but the concrete sins against love: violence, hatred, sloth, envy, discord, schism, war, and scandal?

In The Betrayal of Charity: the Sins that Sabotage Divine Love (Baylor University Press, 2011), the prolific theologian Matthew Levering turns this imaginary scenario into a reality by doing what he does best: putting some of the most diverse writers and thinkers you can imagine into dialogue with the writings of St. Thomas Aquinas and Sacred Scripture and letting their sometimes clashing differences throw fresh light on key theological questions.

The plan of the book is straightforward: after an opening chapter on the idea of love in Aquinas, Levering launches into a chapter-by-chapter consideration of each of the classical sins against charity: violence toward neighbor (1), hatred of God (2), sloth (3), envy (4), discord (5), schism (6), war (7), and scandal (8). One of the great things about this book is that if you have some particular sin you’re interested in—say, violence or war—you can go straight to that chapter and listen in on the conversation.

For my money, the most fascinating sections were on ecclesial schism and just war. Both chapters were challenging and engaging, making me think about charity and the sins against it in new. 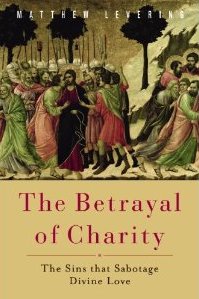 In Chapter 6, Levering turns to schism—i.e., the deliberate severance of an ecclesial unity willed by God—as a sin against charity. In order to do so, he focuses on the classic example of schism in the Old Testament: the story of Korah’s rebellion against the priestly authority of Moses and Aaron (Numbers 15-18). In this text Korah rises up against Moses on the basis of a sound democratic principle, saying to Moses:

“You have gone too far! For all the congregation are holy, every one of them, and the Lord is among them; why then do you exalt yourselves above the assembly of the Lord?” (Num 16:3).

According to Korah’s ‘ecclesiology’, the priestly hierarchy and the liturgical leadership of Moses and Aaron are not a divinely willed order but rather a pernicious threat to the unity of the assembly. Perhaps not unsurprisingly, modern exegetes like Walter Brueggemann are sympathetic to Korah’s position, holding that the priestly and hierarchical role of Moses and Aaron ultimately is just a form of “intolerance” and will-to-power.

By contrast, Levering shows how for Aquinas, the account of Korah’s rebellion in Numbers 16 is instead a window into the insight that schism is nothing less than a sin against the visible and liturgical unity willed by God, and hence, a sin against charity. Indeed, Aquinas considers it the greatest of all sins against neighbor:

“Of all sins committed by man against his neighbor, the sin of schism would seem to be the greatest, because it is opposed to the spiritual good of the multitude.” (Summa Theologiae, 2-2.39.2 ad 3)

This is a striking claim. How many modern Christians would think of schism as the greatest possible sin a man can commit against his neighbor? For those of us living in a world of over thirty thousand Christian denominations, the experience of schism can easily become an unquestioned reality. Indeed, we live in Christianity so divided that even the very word “schism” seems to be disappearing from our theological vocabulary, though the New Testament lists it as among the most serious of sins (Gal 5:19-21).

In light of the testimony of Scripture, what might it mean in our day and time to speak of “schism” once more as a sin against charity? And what might it mean to take seriously Aquinas’ proposal that “it is impossible to keep men together in one religious denomination, whether true or false, except they be united by means of visible signs and sacraments?” (Summa Theologiae, 3.61.1).

Along similar lines, in Chapter 7 (“War and the Interpretation of Scripture”), Levering offers a riveting exploration of the question of just war in Scripture. He contrasts Aquinas’ treatment of the subject with interpreters such as Richard Hays and John Howard Yoder, who argue that biblical charity requires complete pacificism or non-violence.

This chapter alone is worth the price of the book. Although from a personal perspective I have never been inclined to strict pacifism (being somewhat pugilistic by temperament), from an exegetical perspective I’ve always felt like the position had a certain biblical edge. How can one reconcile any theory of just war with Jesus’ command to “turn the other cheek” (Matt 5:39) or his solemn declaration to Peter that “all who take the sword will perish by the sword” (Matt 26:52)?

Again, Levering turns to the masterful treatment of the biblical texts in Aquinas’ question on war and charity (Summa Theologica, 2-2, 40). The upshot of the treatment is a remarkably balanced discussion of war in which Aquinas, on the basis of scripture, tradition, and reason, rejects one the one hand the sins that go hand in hand with war—“the passion for inflicting harm, the cruel thirst for vengeance, and unpacific and relentless spirit, the fever of revolt, the lust of power, and such like things” (Summa Theologiae 2-2.40.1)—and the other, an all-out pacifism.

For Aquinas, a proper analysis of Scripture leads to the conclusion that those in authority may resort to waging war if they do so in order to obey God’s command in the Psalms:

In other words, when the weak and powerless are under the boot of an oppressor, war waged without “the passion for inflicting harm” can be an act of charity toward the powerless, rather than a sin against it (pp. 120-21).

These are just a couple of the fruitful and often controversial topics that Levering’s book opens up for discussion.

In his recent social encyclical, Pope Benedict XVI, wrote that “love” in the strict sense—caritas—is always in danger of being reduced to mere “sentimentality,” nothing more than “an empty shell, to be filled in an arbitrary way” (Caritas in Veritate no. 3). In order to remedy this situation, Matthew Levering has taken something we poor banished children of Eve know all too well—the sins against love—and used our experiences of love’s opposites to throw light on the real shape of charity toward God and neighbor.

The result is a fascinating and often convicting foray into the mystery of caritas—one which, on several occasions, forced me to put down the book and prayerfully reflect on the ways in which I have committed sins against charity in my own life.