Beauty: the Remedy to a Culture Gone Numb

By Leroy A. Huizenga

Leroy A. Huizenga is Administrative Chair of Human and Divine Sciences at the University of Mary in Bismarck, ND. His book Loosing the Lion: Proclaiming the Gospel of Mark reveals how the shortest of the four Gospels is an intense, wild, and impossible story that brings us to an encounter with Jesus Christ.

In our post-Christian culture, the gospel is no longer compelling, even in supposedly religious rural areas. The capitalistic media culture in which we live—in which everything from what’s supposed to be hard news to hard-core pornography is packaged as entertainment for the sake of profit—affects Manhattan, NYC, as well as Medora, ND, thanks to the technology of the Internet, accessed through devices that fit in farm kids’ pockets.

Where religion remains, it’s become what Notre Dame sociologist Christian Smith famously calls “Moral Therapeutic Deism”: moral, in that most people nowadays reduce religion to the morality of a mere ethics of consent; therapeutic, in that most people think the business of religion is to make them feel good; and deism, in that the God most people think they believe in is the grand watchmaker who set everything in motion but now stays aloof from our affairs. Moral Therapeutic Deism is a gossamer gruel, a sorry substitute for full-throated Christianity, in which the Triune God invades us to save us from ourselves and bring us to him forever.

Thus, ours is a culture grown numb to the gospel, content with counterfeits. The statistics are sobering, especially among the young. If you’ve read Christian Smith’s Young Catholic America: Emerging Adults In, Out of, and Gone from the Catholic Church, you know the picture isn’t pretty. It’s the fruit of numbness. Christian churches of all sorts are complicit in their contribution to this numbness to the gospel, whether Catholic or Protestant. Far too often, churches engage in accommodation, moralism, and gimmicks.

Accommodation is trying so hard to present the faith in the world’s terms that the world’s terms end up dominating, and so it then appears we’re simply saying what the wider culture is saying. That’s a recipe for Moral Therapeutic Deism. But we forget that the Bible from Genesis 3 to Revelation (and especially in the Gospel of Mark) reveals a conflict with the world, for the entire cosmos is fallen into rebellion and stands under the domination of the evil one. Without the Fall, there is no redemption, no gospel, no good news. Accommodation offers a false gospel of mere affirmation, not salvation. God doesn’t affirm us; God saves us.

With accommodation comes mere moralism. Moralism ultimately has nothing transcendent to say and can only encourage people to try harder to fit whatever mold various spirits of the age have on offer. At best, it can only appeal to a certain nobility of spirit, and at worst, it devolves into divisive harangue.

Pope Francis rightly rails against this, as did Benedict before him. Much preaching today is merely moralistic, telling people what they must do, and as moralistic preaching is driven by the spirit of the age, usually what is preached is what they must do to be a good compliant bourgeois member of middle-class society. But in the Bible, God acts first and any moralism is a response to God’s love expressed in saving actions. The particular God of Israel saves his people from Egypt, and then come the Commandments. The same God understood as Father, Son, and Holy Spirit saves his people in the life of Jesus Christ, and Christian morality flows from that.

The combination of accommodation and moralism leave churches with little to work with but gimmicks: a domesticated, moralistic message of affirmation, slick marketing campaigns, and worship as entertainment.

Accommodation concerns not just content, but even the form of our faith, and that means attention to liturgy. Christians nowadays do not only think like the world, but worship like the world in worldly forms. And since lex orandi lex credendi lex vivendi (the rule of liturgical prayer is the rule of belief is the rule of life), they act like the world and drift away, for when churches accommodate to culture, they offer nothing distinctive over and against the culture. And then they empty: as it is said, a church that marries the spirit of the age becomes a widow in the next.

We Catholics shouldn’t blame the Council. The Second Vatican Council, in its texts, gave us the theological and pastoral tools for mission in postmodernity. As Bishop Robert Barron often puts it, the goal of Vatican II was not to modernize the Church, but to Christify the world.

But a funny thing happened on the way to Christification. Vatican II was intended to drive a major missionary effort powered by the twin engines of Scripture and liturgy. But something went wrong in the implementation: instead of the compelling scriptural story of salvation history, we got the acid bath of positivist historical criticism; instead of compelling liturgy revealing the culmination of salvation history in the in-breaking of the eschaton at every Eucharist, we got something else.

The Second Vatican Council’s Sacrosanctum Concilium was not a call to liturgical accommodation in matters of form, but a desire for people to see more clearly and participate more deeply in the Roman rite, precisely so that they might more deeply encounter the Triune God. Sacrosanctum Concilium’s call for the maintenance and priority of Latin, chant, and organ, for instance, reveals a deep desire for sacred liturgical beauty reflecting the beauty of God transcending the secular cultural forms trending in the 1960s and 70s.

So what do we do today? How do we “recover the sense of religious fear,” as T. S. Eliot said, so that the Church and world may be overcome by religious hope once again?

I want to suggest the remedy of beauty: beauty in liturgy, which means beauty in both Word and Sacrament.

Why beauty? One reason is practical: this age is numb, if not hostile, to both truth and goodness, but beauty still grips people. Too often, we start with truth in the form of apologetics, or goodness in the sense of moralism. And people don’t want to hear it. But beauty still has the capacity to shock, to awaken, to attract. 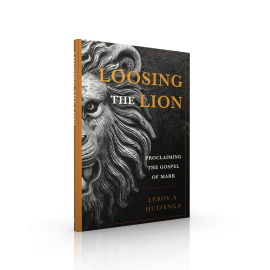 Drama. Irony. Betrayal. Miracles. A holy war with the whole world at stake. And it’s all packed into the shortest of the four Gospels. Written in an engaging, lively, oral style, Loosing the Lion tells us how, despite being misunderstood and neglected throughout most of history, the Gospel of Mark has recently been experiencing a scholarly revival. Theologians are beginning to see how it is actually an intense, wild, impossible story told at a breakneck pace with twists and turns that shock and surprise those with eyes to see and ears to hear.