By John and Claire Grabowski

John Grabowski is an Associate Professor and the Director of Moral Theology and Ethics at The Catholic University of America. John and his wife, Claire, were appointed as a Member Couple to the Pontifical Council for the Family by Pope Benedict XVI in 2009. They have been married since 1985 and are the authors of One Body: A Program of Marriage Preparation and Enrichment for the New Evangelization.

In their wedding vows, a man and woman make a gift of themselves to each other. They promise fidelity and the whole of who they are as persons. This mutual gift then becomes the basis of the whole of their life together—their communion of love. This gift is remembered and expressed in a unique way in the bodily language spoken in sexual intercourse.

This is one reason why the prophets of the Old Testament could compare Israel’s worship of other gods as a form of adultery or “playing the harlot.” The covenant between Israel and God was also marital. It was rooted in promises of total fidelity expressed in the worship of only Yahweh. Under the influence of this great sign at the heart of their lives, the people of Israel came to understand the necessity of fidelity within the covenant of marriage. As Pope Benedict XVI says, “Corresponding to the image of a monotheistic God is monogamous marriage.” But the people of Israel also came to realize God’s tender and passionate love for them. God is like a husband who passionately pursues and tenderly loves his bride, even when she was not faithful to him. This revelation of God’s passionate love for us culminates in Christ the Bridegroom laying down His life for His Bride, the Church. In His act of love, sacrificial self-gift (agapē) and passionate desire for union (eros) are completely interwoven. This is the intimate love that we receive in the Eucharist.

This is the divine love at the heart of Christian marriage. Christian marriage is a covenant, but it is more than this. It is more than a covenant uniting a man and woman before God. It is more than a sign of God’s marital union with His people in the Old and New Covenants. It is also a participation in the union between Christ and the Church that communicates God’s transforming life and love. That is, it is a sacrament. Sacraments are efficacious signs. They not only are symbols of holy things; they communicate grace (God’s own uncreated life) to us.

Corresponding to the oath of the marriage covenant is the couple’s expression of consent in their wedding vows. A couple makes a free and conscious choice to bind themselves to one another in the midst of the Christian community. They promise to be faithful to one another and to love and honor one another for the whole of their lives. In so doing, they make a gift of themselves to each other. This gift includes the whole of who they are as a man and a woman which includes their fertility—their capacity to cooperate with God in bringing children into the world. Therefore, consent is ordered to and expressed in sexual consummation—the sign or gesture that fully enacts this covenant promise. The “language of the body” spoken in marital sex, therefore, is a recollection and an enactment of their vows to each other. This does not mean that every time a couple has intercourse they mystically relive their wedding vows. It means that giving themselves to each other sexually—whether they are tired or energetic, anxious or joyful, aware of its full meaning or not—expresses in a bodily way the promises that united them as husband and wife.

In the understanding of the Western Church, it is the couple themselves in virtue of their baptism who confer the sacrament on each other. Pope John Paul II says of the exchange of vows: “With these words the engaged couple contract marriage, and at the same time they receive it as a sacrament of which they are both ministers. Both, the man and the woman, administer the sacrament. They do so before witnesses. The authorized witness is the priest, who at the same time blesses the marriage and presides over the whole liturgy of the sacrament.” The priest generally must be there along with other witnesses (usually two), but, in some sense, he is expendable. Christ acts in and through the couple to unite them before the Church community.

When a couple is joined in marriage, a bond is created that gives them a new identity as husband and wife. This bond becomes an ongoing source of God’s grace to sustain and empower the couple over the whole of their life together. It is vital that couples seek to practice and deepen their faith so that they can consciously draw upon the grace of the sacrament in facing the joys and challenges of married life together. Sacramental marriage gives them the power to love, to serve, and to forgive in ways that go beyond the limits of human resources. The new wine of the Holy Spirit far exceeds the water of human effort. 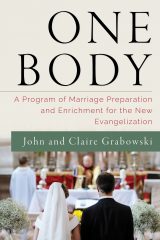 In recent years the Church has called for a more intensive formation for couples preparing for the vocation of marriage, both before the wedding and in the months and years to follow. John and Claire Grabowski’s One Body: A Program of Marriage Preparation and Enrichment for the New Evangelization is an answer to that call. Through the teaching of Scripture and the Tradition of the Church, One Body guides couples preparing for marriage and living out their vocation in such important topics as forming a new family, marriage as a covenant and a sacrament, sexuality and the gift of children, mutual submission in marriage, fostering intimacy in all of its forms, constructive conflict resolution, and “investing” in a marriage.