Commissioned to Preach, Teach, and Baptize All Nations

Fr. Thomas J. Lane is a priest of the Diocese of Cloyne (Ireland) and is Assistant Professor of Sacred Scripture at Mount St. Mary’s Seminary, Emmitsburg, Maryland. He is the author of The Catholic Priesthood: Biblical Foundations.

Before his Ascension, the risen Christ commissioned the apostles to preach, teach, and baptize all nations. This is often called the “Final Commission” or “Great Commission.” The contexts in the Gospels are varied. The commissioning of the eleven in Mark 16:14–16 occurs in the part of the Gospel (16:9–20) considered by most to be a later addition appended to give the Gospel a neater conclusion than the abrupt original ending of 16:8. The impression is given that the commission occurs in Jerusalem on the evening of the day of the Resurrection and the apostles have not yet left for Galilee in compliance with the instruction of 16:7. Christ appeared to the eleven as they were at table (Mark 16:14), chastising them for not believing reports of his Resurrection, and commissioned them to preach the Gospel to the whole world (16:15). Those who believe and are baptized will be saved (16:16), and signs will accompany believers (16:17–18).

In Matthew, the commissioning of the eleven takes place after they have gone to Galilee (Matt 28:16–20). In Matthew 28:19, as in Mark, the apostles are sent on mission to the whole world. When the apostles were sent out on temporary mission earlier, they were forbidden to go to the Gentiles (Matt 10:5), but now they are commanded to go to all nations, making them disciples. In Mark 16:16, Baptism was only mentioned, but in Matthew 28:19 there is an explicit command from Jesus to baptize all nations in the name of the Father and the Son and the Holy Spirit and a promise to be with them until the end of time. It is the most precise expression of the Trinity in the New Testament, but others can also be found in 1 Corinthians 12:4–6, 2 Corinthians 13:14, and 1 Peter 1:2.

John 20:21 has the shortest commission, given to the apostles on the evening of Jesus’ Resurrection: “as the Father has sent me, I also send you.” It is embedded in Jesus bestowing authority on the apostles to forgive sins on the evening of the Resurrection (John 20:21–23). Just as the apostles’ consecration comes from the Father at the request of Jesus (John 17:17), so also their mission comes from the Father through Jesus. The entire Gospel is recounting Jesus’ mission, and now as Jesus was about to depart before his Ascension he bestowed the continuation of his mission on the apostles.

Matthew, Mark, and John have the commissioning of the apostles in common. Luke is the exception. Jesus appears after the two disciples return again from Emmaus (24:36–49), and unlike in Matthew, Mark, and John, those present include not only the eleven but also “those who were with them” (24:33). Those others include at least the two disciples returned from Emmaus (24:33), and we could speculate that the seventy(-two) or many of them were also present. Christ showed them his Calvary victory wounds and ate food, proving he rose in his body. Then he explained that everything written about him in the Old Testament had to be fulfilled, everything in the Law of Moses, the Prophets, and the Psalms. Those Scriptures foretold that the Christ would suffer and rise from the dead on the third day (24:46) and that repentance for forgiveness of sins would be preached in his name to all nations, beginning from Jerusalem (24:47). Yet, unlike in the other Gospels, there is no commissioning of those present to carry out this preaching, but Christ says they are witnesses of these things (24:48) and they are to remain in the city until empowered (with the Holy Spirit) from on high (24:49). In Matthew and Mark, the apostles were commissioned to preach and baptize. In Luke, there is no direct imperative to preach or baptize, but all disciples are called to witness. 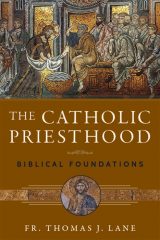 During the time of Jesus Christ, neither he nor his apostles would have had the term “priest” applied to their mission or identity. The priesthood was exclusive to the tribe of Levi and at that time was associated primarily with their sacrificial liturgies in the temple. But with Christ’s death on the Cross, a new understanding of Christ as priest began to grow in light of his priestly self-sacrifice. The Catholic Priesthood: Biblical Foundations by Fr. Thomas Lane highlights the Scriptural evidence indicating that Christ’s intention was to establish a New Covenant priesthood that he would share with his apostles and their successors.