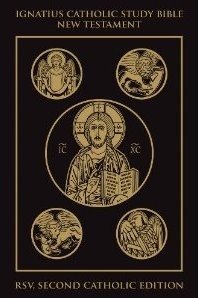 If you’ve ever traveled in conservative evangelical or fundamentalist circles, you know the Scofield Reference Bible. It’s a hefty tome, and influential. And one could argue that this annotated edition of the Scriptures, first published in 1909, created modern fundamentalism. Its editor, C.I. Scofield, made his own theological opinions seem like the plain sense of the Scripture text. In reality, his opinions were no more or less plausible than any others in the Protestant world, but the quality and accessibility of the Reference Bible made his Gospel equivalent to the Gospel for many Americans.

When I first became a Catholic, I marveled that there was no exhaustive study Bible for Catholics – an edition that drew together the Church’s interpretations of Scripture and placed them alongside the reflections of the saints and the best of modern academic research.

In 1998, encouraged by Father Joseph Fessio of Ignatius Press and assisted by my colleague and former student Curtis Mitch, I launched such a project: The Ignatius Catholic Study Bible. Over the past dozen years, Curtis and I have produced commentaries on all the books of the New Testament, submitted them for review, and seen them into publication as booklets suitable for group study.

The booklets included not only the texts of the Scriptures, but also extensive introductions, annotations, cross-references, topical essays, word studies, and charts. Every chapter included discussion questions helpful for group study. Since dogma is the Church’s infallible interpretation of Scripture, we referred regularly to acts of the Magisterium, the teachings of the popes, and the conclusions of the ecumenical councils.

That was a good beginning — but it just got a lot better.

Ignatius Press has now released the Ignatius Catholic Study Bible New Testament, in both hardcover and paperback. At 726 pages, it’s big. But I’m hoping it’s also big in terms of its influence. Scofield’s Reference Bible took his personal opinions and, elevating them to dogma, created and catechized an American subculture. How good it will be if this Bible could do as well in disseminating the dogmas of the Catholic Church — the doctrines of the Church.

I have high hopes, of course. Otherwise I wouldn’t have given twelve years of my life to this project!

But I’m not alone in my reveries. One reviewer said that The Ignatius Catholic Study Bible New Testament is simply “the most important book since the Catechism of the Catholic Church.” A renowned scholar called it “a triumph of both piety and scholarship … the most useful succinct commentary that any Christian or other interested person could hope for.”

For me it is the beginning of a dream come true — only the beginning, since Curtis and I still have to see the Old Testament into print.

But it’s a beginning, and I’m pleased to present it to you, because you do so much to make these beginnings possible, and then guide them to happy endings. Please continue to support the St. Paul Center. Your prayers and contributions make good things — and big things — happen.