Fury of the Idolaters, Beauty of the Faith 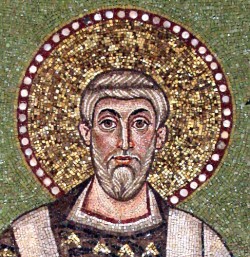 If all we knew of today’s saint were the monuments left in his honor, we would conclude that he was a very great man indeed. July 23 is the memorial of St. Apollinaris, the first bishop of Ravenna in Italy. And the two sanctuaries dedicated to his memory — Sant’Apollinare in Classe and Sant’Apollinare Nuovo — are among the chief reasons why Ravenna appears on lists of the most beautiful cities on earth. (See our previous post on Ravenna. The image at the top of this blog is a sixth-century mosaic from Sant’Apollinare Nuovo.) Here’s what the old Catholic Encyclopedia has to say about our saint:

One of the first great martyrs of the church. He was made Bishop of Ravenna by St. Peter himself. The miracles he wrought there soon attracted official attention, for they and his preaching won many converts to the Faith, while at the same time bringing upon him the fury of the idolaters, who beat him cruelly and drove him from the city. He was found half dead on the seashore, and kept in concealment by the Christians, but was captured again and compelled to walk on burning coals and a second time expelled. But he remained in the vicinity, and continued his work of evangelization. We find him then journeying in the province of Aemilia. A third time he returned to Ravenna. Again he was captured, hacked with knives, had scalding water poured over his wounds, was beaten in the mouth with stones because he persisted in preaching, and then, loaded with chains, was flung into a horrible dungeon to starve to death; but after four days he was put on board ship and sent to Greece. There the same course of preachings, and miracles, and sufferings continued; and when his very presence caused the oracles to be silent, he was, after a cruel beating, sent back to Italy. All this continued for three years, and a fourth time he returned to Ravenna. By this time Vespasian was Emperor, and he, in answer to the complaints of the pagans, issued a decree of banishment against the Christians. Apollinaris was kept concealed for some time, but as he was passing out of the gates of the city, was set upon and savagely beaten, probably at Classis, a suburb, but he lived for seven days, foretelling meantime that the persecutions would increase, but that the Church would ultimately triumph. It is not certain what was his native place, though it was probably Antioch. Nor is it sure that he was one of the seventy-two disciples of Christ, as has been suggested. The precise date of his consecration cannot be ascertained, but he was Bishop of Ravenna for twenty-six years.

I’ve never seen Apollinaris’s see. But it’s on the short list of beautiful things I’d like to see in anticipation of the beauty of heaven.