God Invites Us to Call Him by Name

Scott Hahn, Founder and President of the St. Paul Center, is author of over forty books. Understanding "Our Father": Biblical Reflections on the Lord's Prayer is one of his most popular works, going step by step through the powerful prayer we often take for granted. 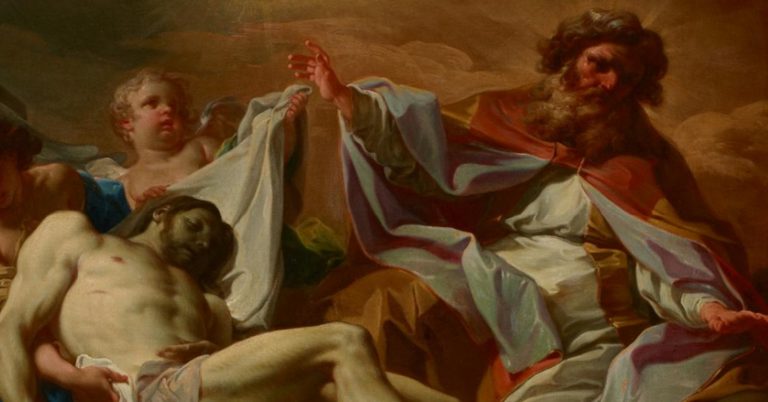 Whenever we pray the Lord’s Prayer, we acknowledge God’s name as “[h]allowed” (Matt 6:9)—that is, as holy or sanctified. But what do we mean by this? Do we mean what Jesus meant?

Most people associate the word holy with things that are transcendent—“wholly other,” in the defining phrase of the twentieth-century scholar Rudolf Otto. The holy is something entirely different from what we experience in ordinary life. “Holy, holy, holy” is what even the angels cry in the presence of a Power and a Mystery that inspires fear and awe (Isa 6:2-3; Rev 4:8).

Some scholars suggest that when biblical authors invoke the name of the Lord, rather than the Person of the Lord, they are consciously avoiding any language that might suggest intimacy. They point out that the psalmist says, “Our help is in the name of the LORD, who made heaven and earth” (Ps 124:8), rather than just, “Our help is in the LORD.” Here, they believe that David is verbally distancing himself from a transcendent God.

By itself, that idea is half true. God is transcendent, powerful, mysterious, and fearsome. Our God is an awesome God. When we speak of His name as “hallowed,” however, we are doing much more than expressing awe, or stating a supernatural fact. This is not the devotional counterpart to a scientist’s evocation of “billions and billions” of light-years.

For Jesus’ idea of holiness was almost the opposite of Rudolf Otto’s. The scholar sees holiness measured in the awe or the fear felt by a believer. Jesus, however, saw holiness as something belonging to God from all eternity, before creation, and so before there was even a single angel or human being to be awestruck by the Almighty.

It’s not that Jesus considered God to be anything less than mysterious or powerful; but God’s mystery and power were not what made Him holy. “Holy” is His name—that is, His essential identity, independent of whether we exist in order to sense His wonder.

Moreover, what made Him holy was not intended to distance Him from us so much as to draw us near to Him in intimacy.

The Hebrew word for holiness is kiddushin, which also means marriage. When something is holy, it is consecrated, set apart from everything else—in that sense, it is transcendent. Yet it is set apart, not for isolation, but for a personal and interpersonal purpose; not for distance, but for intimacy.

In the ancient world, this consecration was achieved by means of a covenant. More than a contract, more than a treaty, a covenant created a family bond between persons or between nations. A wedding took the form of a covenant oath; so did the adoption of a child or the naming of a newborn. These new family relationships brought with them certain privileges and duties. The parties of a covenant invoked God’s name as they swore to fulfill their responsibilities. Should they fail, they accepted the most dire penalties, because they had placed themselves under God’s judgment. By entering into a covenant relationship, they were, in effect, calling down a blessing or a curse (Deut 11:26). If they were faithful, they would receive God’s blessing. If they were unfaithful, they drew down their own curse.

God’s name itself served as an oath. To invoke His name was to call upon Him and place oneself under His judgment. The name of God is the power behind the covenant.

The name of God, then, is His own covenant identity, His personal identity. It’s what proves our personal relationship with Him. When we call upon that name—“Our Father!”—God responds as a Father, and we receive His help. We also bring on His judgment, but that judgment is a blessing to those who avail themselves of His help.

When Jesus teaches us to pray, “Hallowed be thy name” (Matt 6:9), He shows us that the name of God is consecrated. It is holy. God’s name is not merely transcendent and mysterious; it is intimate and personal and interpersonal. It is the basis for the covenant.

This is an astounding fact—even more astounding when we consider God as awesome and transcendent. He is all these things, and yet He is ours. He is our Father! 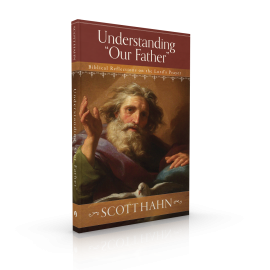 The prayer at hand has been called many things: the Pater Noster, the Our Father, the Model Prayer, the Lord’s Prayer. In Understanding “Our Father”: Biblical Reflections on the Lord’s Prayer, Scott Hahn presents a unique meditation on this common prayer, leading readers to consider the wealth of meaning in its seeming simplicity.