How Do We Love Our Enemies?

Emily Stimpson Chapman is an award-winning Catholic author of over a half-dozen books, including Hope to Die: The Christian Meaning of Death and the Resurrection of the Body, co-authored with Scott Hahn; The Catholic Table: Finding Joy Where Food and Faith Meet; These Beautiful Bones: An Everyday Theology of the Body; and The Catholic Girl’s Survival Guide for the Single Years. She also is the editor of the high school faith formation series Formed in Christ and the author of numerous studies for the women’s ministry Endow. Chapman lives in Pittsburgh with her husband, Chris, and their three young children.

The easy answer is grace. Grace makes the impossible possible. It’s the life of God in us, and it allows us to live in a way that’s more than human—that is, in a sense, divine. The more grace we receive—the more we pray, receive the Eucharist, go to Confession, read the Scriptures, sit in Adoration—the easier it becomes to want to love our enemies, to want hate to have no place in our hearts.

As St. Thomas Aquinas so famously taught, though, grace perfects nature. It works in and through who we are. It’s not magic. It makes better what’s already there. And when it comes to loving our enemies, one of the human qualities that grace perfects is empathy. It elevates the natural human virtue of compassion to a supernatural love. Compassion is not your strong point though, Emily. And it won’t be, not until you stop staring so intently at the broken pieces of your own heart and start looking around you, at the broken pieces of others’ hearts.

This is hard for you. At twenty-five, you’re still focused on your own wounds. Your eating disorder, your struggle with depression, your loneliness, your insecurities—they consume your thoughts. You spend so much time thinking about your hurts, talking about your hurts, and wanting others to understand your hurts that you don’t have much time left for thinking, talking, and seeking to understand others’ hurts. This will change, though.

You will be single for a long time. Which sounds miserable now, but ultimately brings so many blessings. Among those blessings are your roommates. You will have . . . many. I lost count somewhere around thirty. Anyhow, as the years go by, you will welcome one woman after another into your home—some for weeks, some for years—and the more women who come to stay, the more listening you will do. You’ll learn these women’s stories. You’ll learn that you aren’t the only broken, hurting human being on the planet. You’ll learn that your brokenness doesn’t make you special; it makes you human. Everyone has their wounds. And slowly, you come to see that more often than not, when someone shows the world cruelty, what they’re really showing are their wounds. They’re showing the world their pain.

If there’s anything besides Jesus and grace that makes it possible for you to love your enemies, Emily, it’s this knowledge, this experience.

One woman in particular will drive this lesson home. Her name is Ruth. When you first meet her, she is an addict, homeless, and utterly broken, in body and mind. It isn’t hard to understand why. When Ruth was just a baby, her parents split. Soon after her eighth birthday, her father was murdered. Four years later, her mother, under the influence of drugs, ran off, leaving Ruth and her older sister to fend for themselves in the ramshackle trailer park where they lived. Ruth was a pretty girl—stunning, actually. And you know what happens to pretty girls left alone in the world.

Everything that could have gone wrong in Ruth’s life went wrong—abuse, abandonment, loss. Everyone used her. Everyone betrayed her. Life didn’t leave her with one good gift. And it showed. Her brokenness went ahead of her, announcing its presence as soon as she walked into a room. Occasionally, she could be charming. But she was always demanding, trying to control the only things she could control: the light in the room, the temperature of her pizza, the topic of conversation. And when she was really hurt, she raged at the world with whatever she could grab—a baseball bat, a shoe, her fist.

Many of the people fighting in the streets and online remind me of her. Not the peaceful ones, but the violent, most cruel ones. They’ve been ignored. They’ve been abandoned. They’ve been hurt. For some, poverty, inequality, or bigotry are the source of their pain. Others have been hurt by their bosses. Or their parents. Or their fellow Christians.

All that hurt has to come out somehow, and it usually comes out sideways. Some people take the pain inflicted on them by others and direct it back at themselves. They cut themselves, starve themselves, or drug themselves. Others give themselves to people who don’t deserve them—people who hurt them—because they don’t believe they deserve anything better.

Most people, though, don’t hurt themselves quite so directly. They hurt others. They let their pain make them ugly. It comes out not as a cry for help, but as a racist remark, a fat joke, a rumor maliciously spread, or a knife in the back. The more broken a person is, the more they try to break others. And the more they do that, the more addicted they become to cruelty. It starts to reshape their hearts, making them less like the God who died and more like the angel who fell.

As a mother, one of your biggest fears is that someday your beautiful boy, whom you wanted before you knew of his existence, will hear from some hurting kid that he wasn’t wanted. You already hear their taunts in your head. “Your real parents gave you away. They abandoned you. What is wrong with you? Why did no one want you?”

What if he believes them? He could. Because they will target him where they think it will hurt him the most: his adoption.

That’s what hurt people do. They strike at our deepest vulnerabilities. And they always know where to find them. Sometimes because it’s obvious. But often, I believe, because the devil whispers our weak spots in their ears. Hate finds its mark because the devil directs the shot.

Never be surprised by people’s cruelty, Emily. Assume brokenness. Assume pain. Just like you are more broken than you realize, the people you pass on the streets or sit next to in restaurants or work alongside are more broken than you can possibly imagine. When you see a person wrecking the world around them, strive to see not their rage, but their wounds. Then, instead of reacting with anger or hurt, entrust them to Jesus’s Sacred Heart.

The more you do this, the easier it will become to love your enemy. You will still feel anger. You will still feel hurt. But holding the anger back, not letting it lead, and reacting with compassion instead will start to feel more natural, more possible, more not insane. 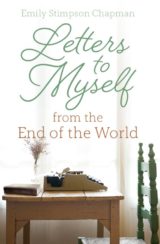 Letters to Myself from the End of the World is both personal and practical. In letters to her younger self—but also to all who are struggling with a hurting Church and World—Emily Stimpson Chapman reflects upon sin and grace, the Church’s sacraments and saints, scandals and injustice, social media and prayer, suffering, adoption, motherhood, and much more.