Why Christians Should Keep Caring for the Sick

Mike Aquilina is the best-selling author of more than forty books on Catholic history, doctrine, and devotion. In The Healing Imperative: The Early Church and the Invention of Modern Medicine As We Know It, discover how Jesus and the healing imperative transformed how we treat the sick.

We live in a strange world today. Some people are beginning to call it a post-Christian world, in spite of the fact that Catholics are more numerous than any other single group on earth.

But really it’s the intellectual world in the West that’s turning post-Christian. And it’s developed its own mythology of “The Warfare of Science with Theology,” to use the title of one of the founding texts of this odd idea. According to this myth, science has battled Christianity throughout history, and we have made progress only to the extent that science has overcome Christianity in the incessant battle.

But ask yourself this question: Why did modern science develop only in the Christian West, and nowhere else on earth? Why did only the Christian West follow through with astronomy, with physics, with geology, with biology— and with medicine?

Pagan antiquity had all the ingredients for the hospital, for example. The Greeks and Romans had doctors. They had valetudinaria, the repair shops for slaves and soldiers. And yet, neither the Greeks nor the Romans ever produced a hospital. As Gary Ferngren stated emphatically: “There were no pre-Christian institutions in the ancient world” that served the same purpose as modern hospitals. There was nothing that even resembled the hospitals that arose in the fourth century—or the hospitals we know today.

The Greeks and Romans had the material resources, but they lacked the spiritual resources. They lacked a belief in charity—self-giving love—as a share in the life of God. They lacked the belief in human dignity and universal brotherhood. They were ignorant of the divine command to heal—the healing imperative—and to show hospitality to friends and strangers alike, and even to enemies.

You can make similar arguments for all the other sciences. Christian assumptions about the world lie at the root of the very idea of science. You and I can understand the world because we don’t live in a universe of capricious deities gallivanting around pulling rugs out from under each other and following their random whims in unpredictable directions. We live in a universe made by a God of reason who planned it carefully and revealed himself through his plan. Without that assumption, you can’t have science.

And you can’t have medicine without caring for the poor and helpless. Or at least you can only get so far. The classical world had produced some distinguished physicians, but the science didn’t make progress. It took the hospital—a natural research center and the only place where physicians could build up a body of medical knowledge that survived from one generation to the next—to make scientific medicine possible.

And the hospital could not happen without Christianity. It did not happen in a pre-Christian world. We should wonder, then, whether it can survive long in a post-Christian world, without the spiritual resources of the Gospel and the sacraments.

I must conclude by confessing my optimism, mostly because I have no faith whatsoever in post-Christianity. I do not believe a post-Christian society can sustain institutions such as the hospital; but neither can post-Christianity itself sustain a society. In the wake of the French Revolution, the anticlerical government found itself in the embarrassing position of dependence on Catholic religious orders. Nobody else could effectively run hospitals and clinics. Nobody but the religious sisters really wanted to care for the poor.

Almost a hundred years ago, G.K. Chesterton wrote of the “five deaths of the Church.” His count was surely on the low side, for the Church’s enemies are often pronouncing it dead, even as their very society and institutions depend upon Christian principles. Christianity, meanwhile, has survived all of its despisers and persecutors. It has proven its resilience by rising again with more culture-forming power than before, and then more astonishing developments in the arts and sciences. In post-Revolutionary France alone it produced physicians as great as Louis Pasteur and Claude Bernard. It is at least worth noting that more than a dozen winners of the Nobel Prize in medicine have publicly identified themselves as Catholic, and several of those were converts to the faith.

Christianity will survive those who celebrate its demise. It will rise in its saints, many of whom will be doctors, nurses, physicians’ assistants, nurse practitioners, lab technicians, and administrators. The disciples of Jesus, even if they are few, will continue to hear his healing imperative, and they will respond in innovative ways, in spite of their limitations, in spite of the threats of those who despise them. 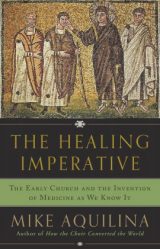 The Healing Imperative: The Early Church and the Invention of Medicine as We Know It reconstructs the fascinating history of a uniquely Christian institution: the hospital. Underlining how the virtues of charity and hospitality motivated the first generations of Christians, along with Jesus’ explicit command to heal the sick, Aquilina shows just how revolutionary the actions of Christian doctors and nurses were and how they transformed society in ways that still reverberate today.