Benjamin Wiker is a professor of Political Science and Director of Human Life Studies at Franciscan University of Steubenville. He is the author of In Defense of Nature: The Catholic Unity of Environmental, Economic, and Moral Ecology.

Our economy and culture have become based upon screens. This takes its toll on our health. Because we’ve shifted to a screen-based culture, more and more of us make our living sitting for long, long hours staring bleary-eyed at screens. The result: chronic headaches, backaches, obesity, and worse.

Against our nature, we have become the self-destructive, sitting animal. As the new buzz well states it, “Sitting is the new smoking,” the new cause of a kind of ill-health epidemic we’ve so recently but foolishly visited upon ourselves. Hour after hour of sitting is not natural, a sign of which is the increased incidence of physical and mental health problems, such as cardiovascular disease, diabetes, obesity, increased premature mortality, depression, anxiety, and sleep difficulties among the sedentary. Dr. James Levine of the Mayo Clinic-Arizona State University Obesity Solutions Initiative provocatively but accurately states, “Sitting is more dangerous than smoking, kills more people than HIV and is more treacherous than parachuting. We are sitting ourselves to death.”

If we were looking at any other kind of creature in an ecosystem with such evident signs of physical distress— say the population of white-tailed deer were drastically overweight, limping around on wobbly, nearly-vestigial legs, bleary-eyed, and uncharacteristically lethargic—we would look for the causes in changes in the water, air, foliage, or parasite population to figure out what had gone wrong in the ecosystem. We don’t have that far to look for the cause of our own evident distress: we have chosen a screen-based culture, a fairly recent societal, economic, and cultural choice, which has shown its destructive effects with remarkable rapidity.

That wasn’t how it was supposed to happen. We had a rosy picture of how this technology would turn out, and in many respects it has far exceeded our expectations, but we were woefully shortsighted about the multitude of unexpected harmful effects to nature and human nature of introducing it into our culture. It wasn’t something that was added to an existing culture; it devoured and digested the culture.

Now that technology dominates our cultural and our economic ecosystem, our leisure and our work, we find, much to our surprise, that the good comes with considerable and unforeseen ills. Just like the water and air pollution that came with factories that build all the stuff we want and soon throw away; or the poisoning of our water and chronic leaching of the soil that came with large-scale, fertilizer- and pesticide-intensive farming; or the campaign to free sex from any and all restraints.

That lesson in itself is very, very valuable: human beings tend to be shortsighted smart rather than farseeing wise. We made a machine to serve us, and it has ended up dominating and defining us instead. We’re slaves to our electronic devices, and they are literally sapping the life out of us.

In the deepest respects, this is the unintended result of the Baconian revolution to master nature. In order to master nature, not just in terms of power but wise use as well, we’d need to be all-powerful and all-wise. Technology gives us increasingly god-like power, but wisdom is something quite different from scientific-technological power, otherwise we wouldn’t so regularly end up harming ourselves and our environment with our newest devices and discoveries.

If the Baconian dream were to be fulfilled, we’d have to be, well, God Himself, all-powerful, wise, and benevolent. But we’re not. We’re just increasingly powerful human beings with all the nobility and baseness, patience and impulsiveness, refreshing humility and foolish pride, good intentions and wicked designs we’ve always had. Surprise. Who’d have thunk it? Now we have a screen-based, deformed culture, deforming us in its blinking image.

Researchers there have found the immensely beneficial effects of what Japanese call Shinrin-yoku (loosely translated “forest bathing”)—daily immersion in the deep woods for meditative walks. Studies have found those who had such walks through the forest had increased positive feelings, decreased anxiety and depression, strengthened immune systems, and increased anti-cancer proteins.

Our need for nature is so powerful and deep that researchers have found that merely having a window that looks out on a natural setting (onto woods, mountains, or rural landscapes), as opposed to an urban setting or a brick wall, decreases the anxiety, the amount of drugs, and the stay of hospital patients. Not surprisingly, greener living areas (vs. the concrete and crowded urban areas) have a significant positive effect in reducing lung, breast, uterine, prostate, kidney, and colon cancers, and generally, in reducing the risk of mortality. Having windows that open on nature in schools and workplaces, and even putting potted plants indoors, decreases stress and fatigue, and increases the capacity to concentrate. 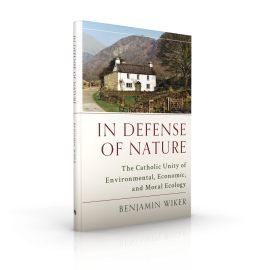 Ecology calls to mind nature “out there”—trees, rivers, oceans, animals, birds, the air, distinct ecosystems. But as Benjamin Wiker argues in his book In Defense of Nature, an obvious part of nature has been mysteriously left out of the environmental movement: our own nature—human nature, especially its essential moral aspects.