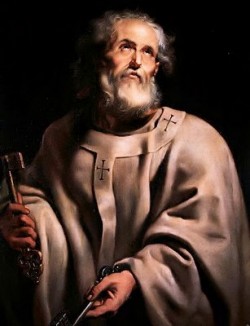 Heads-up. Let’s get ready to rumble! Over the next coming days I’m going to spend some time here looking at one of the most debated passages in all of the Gospels. So, here we go. . .
In Matthew 16:13–20 we read the famous confession of faith by Peter at Caesarea Philippi. In response to his statement affirming him as the “Son of the Living God,” Jesus tells Peter: “I tell you, you are Peter [Greek: petros] and on this rock [Greek: petra]. I will build my church . . .” (Matt 16:18).

About this text, Davies and Allison write that is “among the most controversial [verses] in all of Scripture.”[1] Specifically, the question revolves around the identification of Peter as the “rock” upon which Jesus builds the church. Because two different terms are used Πέτρος [petros], referring to a small stone, and πέτρα [petra], which carries the connotation of a larger rock, some have suggested that something other than Peter himself is to be seen as that which the church is built upon (e.g., Peter’s confession of faith).

This however, as a number of commentators have noted, would seem to ignore some important grammatical issues involved. I’ll be covering them here in the next few days. So again, stay tuned! And tell all your friends!