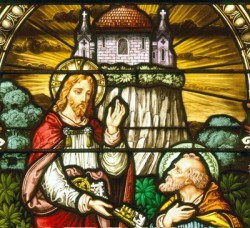 In his detailed commentary on Matthew, Robert Gundry makes the argument that Jesus was purposeful in using different words in his declaration to Peter—“you are petros, and on this petra I will build my church” (Matt 16:18).

Gundry is representative of many Protestant commentators. His view: the rock the Church is built upon is decidedly not Peter, but something else. In Gundry’s view, the petra, the “rock”, is the very words of Jesus. This, he argues, flows from a more careful reading of Matthew’s Gospel. For earlier, in Matthew 7:24–25, Jesus concludes the Sermon on the Mount:

“Every one then who hears these words of mine and does them will be like a wise man who built his house upon the rock [Greek: petra]; 25 and the rain fell, and the floods came, and the winds blew and beat upon that house, but it did not fall, because it had been founded on the rock [Greek: petra]” (Matt 7:24–25).
Here’s Gundry in his own words. I’ll offer my own thoughts soon, but I do think he offers an opinion worthy of consideration:

. . . we can see that Πέτρος [petros] is not the πέτρα [petra] on which Jesus will build his church. For Matthew, Peter represents all disciples, including those who are weak and even those who apostatize, and thus the superstructure of the church, not its foundation . . . In accord with 7:24, which Matthew quotes here, the πέτρα [petra], consists of Jesus’ teaching, i.e., the law of Christ. “This rock” no longer poses the problem that ‘this’ ill suits an address to Peter in which he is the rock. For that meaning the text would have read more naturally “on you”. Instead, the demonstrative echoes 7:24; i.e., “this rock” echoes “these my words.” Only Matthew put the demonstrative with Jesus’ words, which the rock stood for in the following parable (7:24–27). His reusing it in 16:18 points away from Peter to those same words as the foundation of the church. Consequently, we are free from the necessity of appealing to Aramaic in order to explain away the usual distinction between Πέτρος [petros], “detached stone” (hardly a firm foundation), and πέτρα [petra],“bedrock.” The two words retain their peculiar Greek connotations, for Matthew’s Jesus will build only on the firm bedrock of his law (cf. 5:19–20; 28:19), not on the loose stone Peter. Also, we no longer need to explain away the association of the church’s foundation with Christ rather than with Peter in Matthew 21:42 (cf. Mark 12:1; Luke 20:17; 1 Cor 3:10–17; 1 Pet 2:6–7; Eph 2:20).[1]