Is Peter the Rock? (Part 3: Some Reasons I Think He Is) 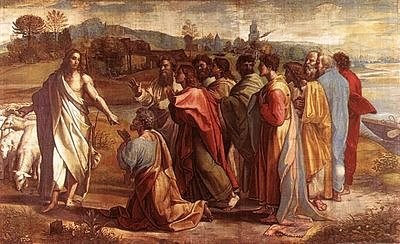 As I explained in the last post in this series, Gundry has made the case that Jesus’ use of petros / petra was intended to highlight the fact that Peter was not the foundation but that the church would be built upon Jesus’ own words.

While this reading may at first seem possible, a number of observations, in my opinion, render such an approach highly implausible. In sum, I would suggest that while Gundry’s reading is possible, it is exceedingly unlikely. Indeed, I think a growing number of commentators would agree—even Protestant ones.

First, we must first acknowledge that it would be odd for Jesus to state that he was building upon a πέτρος (petros), since one would usually associate a building-project with the more sturdy foundation of a πέτρα (petra), as Jesus’ words in Matthew 7:24 indicate.

Going on from this we can point out that, as reader Cale Clark wrote correctly in the comment-box of the previous post, there is a perfectly natural explanation for the πέτρος (petros) / πέτρα (petra) construction: πέτρα (petra) is a feminine word. Jesus could hardly have used a feminine noun as the name of Simon Peter—“You are Petrina”? I think not!

So, grammatically, we have a problem. On the one hand, one cannot use πέτρος (petros) to describe a suitable foundation for a building project—for that, again as Matthew 7:24 indicates, one must speak of πέτρα (petra). Yet, on the other hand, Jesus can hardly name Peter, πέτρα (petra)—because the word is feminine! Jesus can’t give Peter a feminine name!

In fact, if Jesus wanted to apply the terminology of the πέτρα (petra), i.e., that which the Church is built upon, to Peter, we would expect to find very kind of shift in language we have in Matthew 16:18. France puts it well:

“The reason for the different Greek form is simply that Peter, as a man, needs a masculine name, and so the form Petros has been coined. But the flow of the sentence makes it clear that the wordplay is intended to identify Peter as the rock.”[1]

But perhaps all of this is moot. Perhaps Jesus didn’t intend to link Peter to the “rock” the Church is built upon.

Is that a plausible view?

First, let’s be careful about conflating and confusing the imagery—a “cornerstone” is not necessarily a “foundation stone.”

Second, note that elsewhere the apostles are clearly described as the “foundation” of the community. For example, in Ephesians 2:19–20 we read:

“So then you are no longer strangers and sojourners, but you are fellow citizens with the saints and members of the household of God, 20 built upon the foundation of the apostles and prophets. . .”
Likewise, in Revelation 21 we read that the city of the New Jerusalem, the Bride of Christ, i.e., the Church, is said to have twelve foundations—these are clearly linked with the Apostles.

Rev 21:14: And the wall of the city had twelve foundations, and on them the twelve names of the twelve apostles of the Lamb.
In addition, in Galatians Paul identifies Peter as one of the “pillars” of the community—an image strikingly similar to that found in Matthew 16:18.

Third, we might note that Jesus’ identification of Peter as both the leader of the community (e.g., he holds the “keys”) and the foundation stone fits well within a first-century Jewish setting. A strikingly similar image is found in the Dead Sea Scrolls. 4QIsaiah Pesher1 interprets the community as the temple of Isaiah 54:11–12, specifically identifying the priestly leadership as its “foundation”.

Fourth, that Peter is described as the rock the church is built on is confirmed by what follows in Matthew 16:23, where Jesus describes Peter as a “stumbling stone”―a clear play on his role as the “rock”.