Is Priestly Ordination in the New Testament?

Fr. Thomas J. Lane is a priest of the Diocese of Cloyne (Ireland) and is Assistant Professor of Sacred Scripture at Mount St. Mary’s Seminary, Emmitsburg, Maryland. He is the author of The Catholic Priesthood: Biblical Foundations. 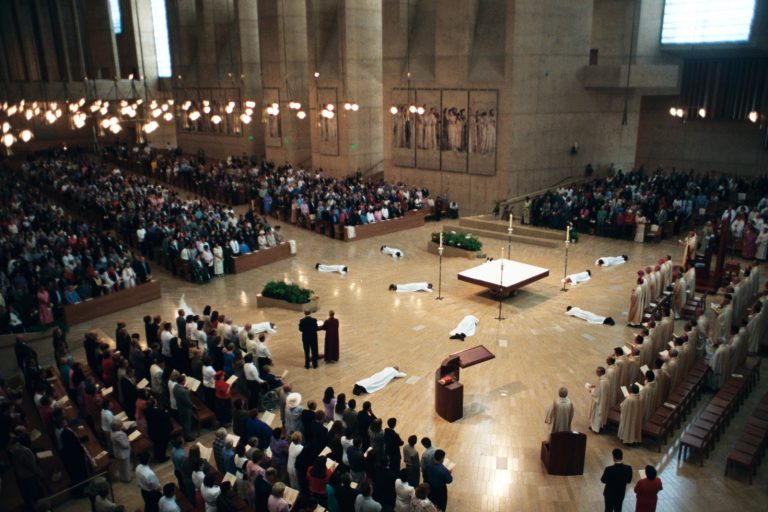 One example of laying on hands without an explicit mention of the Holy Spirit is Acts 14:23, where Paul and Barnabas appoint presbyters in every church during their first missionary journey. Even before going any further, this is already making an assumption that the laying on of hands is what occurs. The word that is usually translated as “appointed” in 14:23 is cheirotonēsantes (χειροτονήσαντες). It is a composite word formed by combining cheir + teneō (“hand” + “stretch”), meaning stretching the hand. In secular Greek, cheirotoneō originally meant to “select” or “choose” (by raising one’s hand), such as in voting for a candidate for civil office, but it later came to mean choosing someone by any means. Somewhat similarly, in 2 Corinthians 8:19, the only other occurrence of the verb in the New Testament, the churches chose Paul’s travelling companion, perhaps Luke (taking it that “we”/“us” in Acts 16:10–17, 20:5–15, 21:1–18, and 27:1–28:16 indicate they are excerpts of Luke’s travel diary with Paul). In time, the word cheirotoneō took on religious meaning. It has a sacred sense in Acts 14:23 when Paul and Barnabas appoint presbyters. Paul and Barnabas had hands laid upon themselves at the beginning of their first missionary journey (Acts 13:3), and Paul laid hands on Timothy (1 Tim 4:14; 2 Tim 1:6). Obviously Paul was aware of the importance, we might say the necessity, of the laying on of hands for the gift of the Holy Spirit on someone being sent on mission. It would make sense, therefore, to assume that Acts 14:23 also intends us to understand that cheirotoneō was indeed Paul and Barnabas stretching their hands out to lay them on the presbyters they appointed over the new churches. Later, cheirotoneō was rendered in Latin with the word ordinatio, whence comes our English word “ordination.”

In the Pastorals, the role of the laying on of hands is underlined, as Paul reminds Timothy to recall when Paul laid hands on him for his mission. John Tipei observes that the mediatory role of the laying on of hands is highlighted and human hands “are literally channels of power by which charisms for ministry are transferred from God, the divine source, to those so appointed.” In 1 Timothy 4:14, Paul urges Timothy not to neglect the gift he received through prophecy and imposition of hands by the presbyterate. The gift, charisma (χάρισμα), is not specified, but the word charisma is associated with spiritual gifts bestowed by the Holy Spirit.

During the time of Jesus Christ, neither he nor his apostles would have had the term “priest” applied to their mission or identity. The priesthood was exclusive to the tribe of Levi and at that time was associated primarily with their sacrificial liturgies in the temple. But with Christ’s death on the Cross, a new understanding of Christ as priest began to grow in light of his priestly self-sacrifice. The Catholic Priesthood: Biblical Foundations by Fr. Thomas Lane highlights the Scriptural evidence indicating that Christ’s intention was to establish a New Covenant priesthood that he would share with his apostles and their successors.