Is Satan a Myth?

Fr. Vincent P. Lampert is the Pastor of St. Michael and St. Peter Parishes in Brookville, Indiana. In 2005 he was appointed the Exorcist for the Archdiocese of Indianapolis. He received his training in Rome and is a member of the International Association of Exorcists. He is the author of Exorcism: The Battle Against Satan and His Demons.

Belief in the existence and activity of angels and demons is a common religious fact within many cultural traditions. At the same time, there are many people who reject the notion of angelic creatures and believe the existence of angels and demons, along with exorcism and demonic possession, comes out of a primitive, superstitious worldview, as a relic from the time of Christ, a throwback to the Middle Ages, or to a time when mental health issues were not well understood.

For some people today, including those in the Church, to even talk about the existence of the devil is an embarrassment. For these people, evil is something of our own making. They believe it is nothing more than humanity’s inhumane treatment of one another. There are also those who look at things from a purely scientific viewpoint that says, “seeing is believing.” Yet for people of faith, we look at things from the viewpoint that says, “believing is seeing.” The basis of what we believe comes to us from Sacred Scripture and throughout the Bible there are many accounts of the devil’s attempts to thwart the coming of the Kingdom of God. Therefore, by asserting the existence of the devil, the Church is remaining faithful to the Bible.

After the Second Vatican Council (1962–1965), the existence of angels and demons was really called into question. With the secularization of society, the general thought was that if one did not accept some spiritual aspect, then it was not true or relevant. Interestingly, the Second Vatican Council references the devil more than any other council. There are references to the devil in the great documents of Lumen gentium, Gaudium et spes, Ad gentes, and Sacrosanctum concilium.

Indeed, in the Catholic tradition, Sacred Scripture and the Magisterium of the Church that consistently confirm the truth of the existence of angels and demons. The Catechism of the Catholic Church states “that God ‘from the beginning of time made at once (simul) out of nothing both orders of creatures, the spiritual and the corporeal, that is, the angelic and the earthly’ [Lateran Council IV (1215): DS 800; cf. DS 3002 and Paul VI, CPG § 8]” (327). The mystery of the human person is linked to these angelic creatures. They are a transcendent reality that lets us humans know that we are not alone in the universe. Our belief in angels and demons helps us to grow in our knowledge of God, his majesty and power, and the immensity of the love that he has for the human person created in his image and likeness.

Scripture provides much evidence for the existence of demons. A major theme throughout the New Testament is a clash between the Kingdom of God and the kingdom of Satan. Jesus is a name that means “God saves.” The traditional title of Jesus as Savior or Redeemer reminds us that Jesus saves and rescues us from a real danger, from something evil. One of the major reasons Jesus became human was to free us from demonic influence. Indeed, his ministry is one of exorcism. We read in the First Letter of John, “The reason the Son of God appeared was to destroy the works of the devil” (3:8). St. Paul in writing to the Ephesians says, “For we are not contending against flesh and blood, but against the principalities, against the powers, against the world rulers of this present darkness, against the spiritual hosts of wickedness in the heavenly places” (6:12). In the Acts of the Apostles we read, “how God anointed Jesus of Nazareth with the Holy Spirit and with power how he went about doing good and healing all that were oppressed by the devil, for God was with him” (10:38).

These passages clearly illustrate the fact that the world that Jesus encountered was saturated with demons, and he came to exorcize them. Jesus shared this power of exorcism with his disciples for when he sent them out he “gave them authority over unclean spirits, to cast them out, and to heal every disease and every infirmity” (Matt 10:1).

There are those who say that Jesus knew the people he encountered were not truly possessed and that he was only going along with the sentiment of the day that demons were real. This reads too much into the sacred text. If Jesus makes the distinction between evil spirits and sickness, then we should make the distinction as well and recognize the reality of these spiritual creatures. 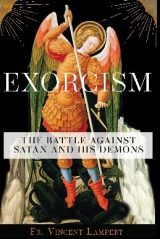 At a time when many Christians no longer practice their faith, there has been an increase in the attention given to the devil and his devious ways. Because the devil seeks to destroy and separate us from God, all Catholics must be on guard. In Exorcism: The Battle Against Satan and His Demons, Fr. Vincent P. Lampert, a seasoned exorcist, presents authentic Catholic teaching on the devil and his plan against humanity.