Jesus Didn’t Just “Die for Our Salvation”: Why He Rose from the Dead 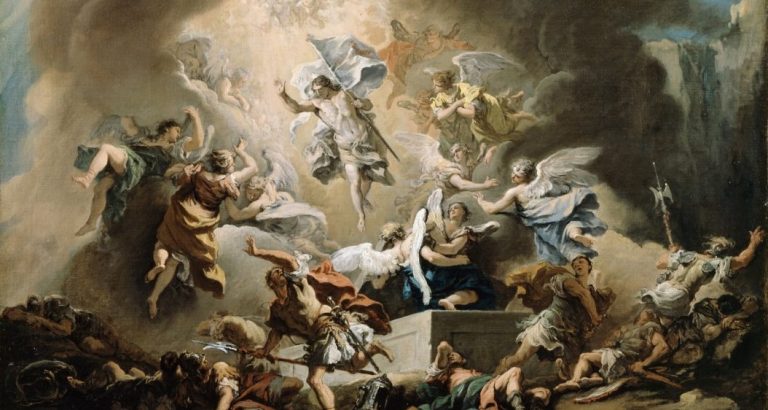 But why did he rise from the dead?

Here I want to ask the question and touch on an aspect of the resurrection that is often overlooked, namely, how it relates to our salvation.

Most people know that Jesus died for their sins. But, as we shall see, according to the New Testament Jesus also rose for our salvation. This aspect of the biblical message is often neglected. The emphasis on usually on the cross. In fact, the resurrection for many people doesn’t figure into their understanding of salvation very much. For most the resurrection is little more than “confirmation”.

Yet a close look at Scripture reveals that the Resurrection is more than that! As Paul makes it clear, if Jesus didn’t rise from the dead “your faith would be in vain” (1 Cor 15:14).

Five Reasons for the Resurrection in Scripture

1. The Resurrection displays God’s Justice. God, Thomas explains, exalts those who humble themselves for God’s sake. He cites Luke 1:52: “He hath put down the mighty from their seat, and hath exalted the humble.” He writes, “Consequently, because Christ humbled Himself even to the death of the Cross, from love and obedience to God, it behooved Him to be uplifted by God to a glorious resurrection.”

2. Jesus was raised for our instruction in the faith. He explains, “our belief in Christ’s Godhead is confirmed by His rising again, because, according to 2 Cor. 13:4, ‘although He was crucified through weakness, yet He liveth by the power of God.’ And therefore it is written (1 Corinthians 15:14): ‘If Christ be not risen again, then is our preaching vain, and your faith is also vain.’” He also cites Psalm 30, a psalm linked with the Passion of Jesus in the New Testament (e.g., Luke 23:46). He points out that the psalmist writes, “What profit is there in my blood?” and asks God what good can come of his seeing “corruption”—the implication for the psalmist is “none”. Why? Seeing the psalm as a prophecy of Christ, Thomas concludes that is was necessary for Christ to rise so that he could preach.

3. The Resurrection was necessary “for the raising of our hope”, i.e., of our own resurrection. He writes, “. . . since through seeing Christ, who is our head, rise again, we hope that we likewise shall rise again.” He turns to 1 Corinthians 15:12: “Now if Christ be preached that He rose from the dead, how do some among you say, that there is no resurrection of the dead?” He also cites Job 19:25, 27 this way: “‘I know,’ that is with certainty of faith, ‘that my Redeemer,’ i.e. Christ, ‘liveth,’ having risen from the dead; ‘and’ therefore ‘in the last day I shall rise out of the earth . . . this my hope is laid up in my bosom.’”

4. The Resurrection transforms the way we live our lives. Thomas cites Romans 6: “As Christ is risen from the dead by the glory of the Father, so we also may walk in newness of life . . . Christ rising from the dead dieth now no more; so do you also reckon that you are dead to sin, but alive to God.”

5. The Resurrection completes the work of our salvation. Thomas explains, “because, just as for this reason did He endure evil things in dying that He might deliver us from evil, so was He glorified in rising again in order to advance us towards good things. Here Thomas cites an often overlooked passage, Romans 4:25: “He was delivered up for our sins, and rose again for our justification.”

This last element is often completed neglected. Preachers will often explain that Jesus “died for our sins”.  But, according to Scripture, the resurrection is every bit as important to salvation. Again, to quote Paul, “If Christ has not been raised, then our preaching is in vain and your faith is in vain” (1 Cor 15:14).

But how is Christ’s resurrection related to our salvation?

Catholics and Protestants talk past each other on a regular basis. Believe me, I know—I’ve spent much of my academic career studying as a Catholic at non-Catholic institutions. I’ve done so as an undergraduate and then as a Ph.D. student.

Why do Catholics and Protestants talk past each other? I believe one of the main reasons is that Catholics and Protestants have differing views on the role of the resurrection. To Catholic theologians, the traditional Reformed approach to salvation which especially focuses on Christ’s death as a “substitution” for our death (penal substitution theory), doesn’t seem to leave much room for the Resurrection in the work of redemption. Indeed, the famous Protestant theologian Karl Barth seemed to limit the significance of the Resurrection to a “verdict” affirming Christ’s work.

In fact, Catholic theology—particularly, soteriology, that is, the theology of Christ’s work of salvation—has always stressed the role of the Resurrection. Let’s return to Thomas Aquinas. Aquinas writes:

“Two things concur in the justification of souls, namely, forgiveness of sin and newness of life through grace. Consequently, as to efficacy, which comes of the Divine power, the Passion as well as the Resurrection of Christ is the cause of justification as to both the above. But as to exemplarity, properly speaking Christ’s Passion and death are the cause of the forgiveness of guilt, by which forgiveness we die unto sin: whereas Christ’s Resurrection is the cause of newness of life, which comes through grace or justice: consequently, the Apostle says (Romans 4:25) that ‘He was delivered up,’ i.e. to death, ‘for our sins,’ i.e. to take them away, ‘and rose again for our justification.’ But Christ’s Passion was also a meritorious cause. . .” (Summa Theologiae III, q. 56, art. 2, ad 4; emphasis added).

This two-fold description of the work of salvation is also found in what I consider to be the greatest contemporary theological treatise, the Catechism of the Catholic Church:

“The Paschal mystery has two aspects: [1] by his death, Christ liberates us from sin; [2] by his Resurrection, he opens for us the way to a new life. This new life is above all justification that reinstates us in God’s grace, ‘so that as Christ was raised from the dead by the glory of the Father, we too might walk in newness of life’ [citing Rom 6:4; cf. 4:25]. Justification consists in both victory over the death caused by sin and a new participation in grace [citing Eph 2:4-5; 1 Pet 1:3]. It brings about filial adoption so that men become Christ’s brethren, as Jesus himself called his disciples after his Resurrection: “Go and tell my brethren” [Mt 28:10; Jn 20:17.]. We are brethren not by nature, but by the gift of grace, because that adoptive filiation gains us a real share in the life of the only Son, which was fully revealed in his Resurrection” [no. 654; emphasis added].

One of my favorite books on the Resurrection is probably written by the late 20th century Catholic theologian, F. X. Durrwell, entitled appropriately enough, The Resurrection. Durrwell was a brilliant theologian whose approach to theology was thoroughly biblical; his work is far too often overlooked. He does a great job emphasizing the role the role of the resurrection in salvation. The following is from his book (pages 28-29, 31, 32).

St. Paul does in fact elsewhere attribute our justification to Christ’s death (Rom 5:9 [cited above]) as well as to his resurrection. Indeed, there seems a striking change of position: in Rom iv. 25, justification is the effect peculiar to the Resurrection alone; yet it also appears to be the result of both the death and resurrection.

But the Pauline theory of justification withstands any charge of incoherence, for our contact with Christ’s death, as well as our contact with his resurrection is effected by our union with Christ in glory, and only through this union do we receive the benefit of his death, the remission of sins.

St. Paul, in fact, teaches that although the death has expiated our sins, our justification, which consists in the remission of our sins and the new life, is given to us in the risen Christ. Man dies to sin and rises again to life in Christ (death, Col. ii. 11ff.; life, Rom vi. 11; viii. 2; I Cor xv. 22); God’s justice, which is implanted in us by this death and this life, is given us in Christ. (2 Cor. v. 21.; Gal. ii. 17.) Here only are we redeemed (Rom iii. 24; 1 Cor i. 30; Col. i. 24); here onyl is our salvation. (2 Tim. ii. 10). Only in this living environment can the justice of God be communicated and grow. And it is the Christ of glory who is meant whenever this phrase is used to express the mystical reality of man’s living union with his Savior. “The Christ of the formula in Christo Jesu is always Christ glorified… not the historical [earthly] Christ” [citing Sanday]....

St. Paul goes even further. The phrase “in Christ” was used to indicate our risen Savior as the principle of our justification. In another phrase, equally dear to him, he identifies the act whereby we are justified with the actual act by which Christ is glorified; we are divinely brought to life by the Father’s act in resurrecting Christ: “Even when we were dead in sins, he hath quickened us together in Christ… and hath raised us up with him.” (Eph. ii. 5-6; Col. ii. 12ff.; iii. 1). The Father has given us life by raising up Christ, we are included in the one life-giving act which was performed for our Lord.

This brings up another question. How can all men at all times be taken up in the single act of the resurrection which brought Christ back to life at a given date in the past? Again the question is difficult, but the statement is perfectly clear.

At the same moment as justice is given to us in the act by which the Father raises up the Son, our sins are also remitted. The texts I have quoted make this clear: while we were dead through our sins, he brought us to life together with Christ. . .

. . . The action whereby the body of the mortal Christ is transformed in augurates the Father’s action of justification; divine life comes to mortal man; the justice of God, which is a living and life-giving holiness, takes possession of him. It is the Father who raises up Christ (Rom. viii. 11; 1 Cor. vi. 14:2; 2 Cor. iv. 25; xiii. 4; Eph. i. 19; Col. ii. 12) and who justifies us. (Rom. iii. 26, 30; viii. 30; Gal. iii. 8.) It is in Christ, and through the act of raising him up, that he justifies us. The resurrection of our Lord is the first of the Father’s life-giving works in a new world, the first and the only one, for all the others are accomplished in it: “He hath quickened us together with Christ. (Eph. ii. 5).

The death and resurrection of Jesus are both working towards our salvation. Each plays a different part in it. If Christ is dead, we who are united to Christ are also dead. This death signifies the end of our life according to the flesh. 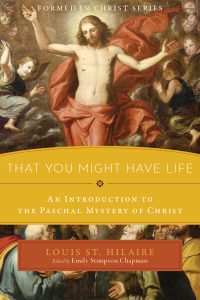 What are the moral implications of the Paschal Mystery in the life of the believer? Why did God allow his Son to die on the Cross? Why the Resurrection? Learn the answers to these questions and more in That You Might Have Life: An Introduction to the Paschal Mystery of Christ.