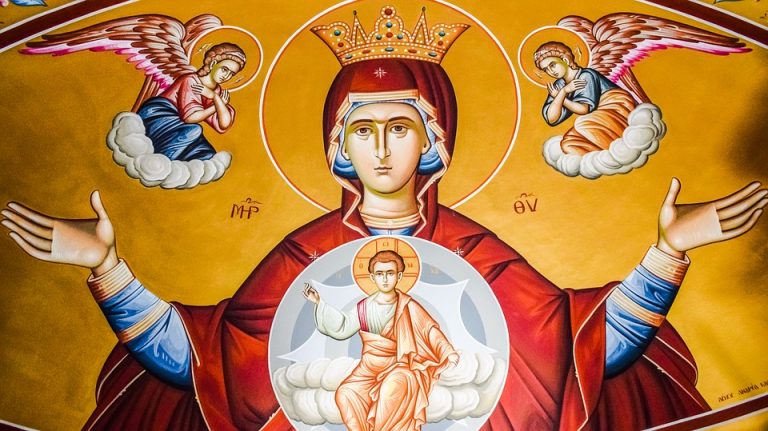 The light of the Son of God is so brilliant that it reaches throughout history, even into the far corners of the Old Testament. Just as the sun’s light is reflected by the moon, so too, where the light of the Son of God shines, that light will be reflected by Mary. In keeping with Catholic tradition, Saint Pius X taught that where Christ is prefigured in the Old Testament, Mary was usually prefigured as well: “In a word, after Christ, we find in Mary the end of the law and the fulfillment of the figures and prophecies.” One example of this is the ark of the covenant, which bore the presence of God and thus foreshadowed Mary’s bearing of Christ as the Theotokos, or Mother of God.

In the Old Covenant, God’s presence or glory had dwelt in the tabernacle according to the instructions given to Moses. But access to God’s tabernacle was prohibited, with the exception of the high priest, who could approach it only on the day of atonement, after many sin offerings. Because of Israel’s sin, the tabernacle was lost and God’s concrete dwelling among His people was taken away in the exile, which continued up to Jesus’ day. But with Mary’s fiat at the Annunciation, God reestablished, in a greater and more intimate way, His dwelling among Israel. Rather than dwelling in a tabernacle made of gold and lined with precious gems, God made His dwelling within the flesh and blood of a human person, Mary. She is the ultimate tabernacle, gilded not by gold but by the grace of God. She is adorned not with gems but with the virtues, particularly humility and love. The Catechism notes that, in Mary, God the Father finally finds a proper dwelling place among men for His presence:

For the first time in the plan of salvation and because his Spirit had prepared her, the Father found the dwelling place where his Son and his Spirit could dwell among men. (CCC 721, original emphasis)

Since Eden, God has desired to dwell among His people, and now “[i]n Mary, the Holy Spirit fulfills the plan of the Father’s loving goodness” (CCC 723, original emphasis).

In the Old Testament, the ark of the covenant held three things: (1) the stone tablets upon which the finger of God had written the Ten Commandments on Mount Sinai, (2) a jar containing some of the manna which God had miraculously provided as food for the Israelites during their forty years in the desert, and (3) the staff of Aaron, the first high priest of the old law. The ark of the covenant was holy because of what was held inside of it, and its presence became synonymous with the presence of God among the Israelites. Where the ark of the covenant was, there also was the presence of Yahweh. Thus this holy vessel of God’s presence was made and handled with special care. The latter chapters of Exodus tell us that the ark was hand-carved of acacia wood and overlaid with pure gold, both within and without. Only the Levites, the tribe which had been set aside for service of the tabernacle, were supposed to carry the ark, and then only with poles, themselves being overlaid with gold, that were fed through rings of gold attached to the sides of the ark.

If in the Old Testament cult the ark, which was simply made of precious gold and wood, held such a place of honor because it mediated the presence of God, it is not surprising that Mary holds a place of surpassing honor in the New Testament cult. The ark bore the presence of God, and after the Annunciation Mary bears God in her womb. Just as the ark contained the tablets of the old law, the manna, and the staff of Aaron, Mary holds in her womb Jesus Christ the Messiah, who is the new law, the living bread from heaven, and the true high priest who offers His own life for us.

That the early Christians understood Mary as the new ark of the covenant is evident in Saint Luke’s crafting of his account of the Visitation (Luke 1:39-56). Luke subtly parallels Mary’s carrying Jesus (in her womb) to visit Elizabeth with the ark’s bearing the presence of God to Jerusalem. In 2 Samuel 6 we hear how David, aware of both his unworthiness that the ark should come to him (v. 9) and of the immeasurable blessing that the presence of the ark brings (v. 12), goes to bring the ark of the covenant up to Jerusalem. David offers sacrifices (v. 13) and leaps and dances (v. 16) before the ark as the procession progresses to Jerusalem amid shouting and the sound of the horn (v. 15).

Saint Luke parallels his account of the Visitation with this scene in 2 Samuel 6 to demonstrate that Mary is the new ark of the covenant. Mary, like David, heads to the hill country of Judah. As Mary, bearing Christ in her womb, approaches the home of Elizabeth, Saint John the Baptist “leaps” in Elizabeth’s womb and she exclaims with a “loud cry,” reminding us of David’s leaping before the ark of the covenant and the shouts of the people of Israel. Elizabeth greets Mary with words similar to those of David, “And why is this granted me, that the mother of my Lord [who is the new ark of the covenant] should come to me?” (Luke 1:43).

By the overshadowing of the Holy Spirit, Mary becomes the new and paramount ark. Just as the ark of the covenant was made holy by its precious contents, so Mary is made holy by the Son of God made flesh within her womb and the indwelling of the Holy Spirit. If the ark of the covenant was rightfully revered in Israel’s liturgy, it should be no surprise that the ark of the New Covenant, Mary, has a place of great honor in the liturgy and life of the new Israel, the Church. After all, God has placed her in the midst of His heavenly temple and has crowned her with a crown of twelve stars. In John’s vision, a third of the angels, along with their leader, the great dragon, are thrown down from the heaven, whereas the woman is raised up on the wings of eagles. Clearly God has thrown down “the mighty from their thrones, and exalted those of low degree” (Luke 1:52). Therefore the Catechism declares that: “Mary, the all-holy ever-virgin Mother of God, is the masterwork of the mission of the Son and the Spirit in the fullness of time” (CCC 721). As God’s “masterwork,” it is no wonder why all generations call her blessed. 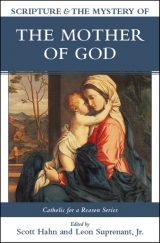 Mary. Who is this hidden and humble woman? Her yes to God’s plan changed the world forever. Yet for many, this quiet Mother remains a controversial and ambiguous figure. Catholic for a Reason II: Scripture and the Mystery of the Mother of God explores the mystery of Mary, the Mother of God, through the personal study and reflection from well known Catholic authors including Scott and Kimberly Hahn, Curtis Martin, Tim Gray, and more.