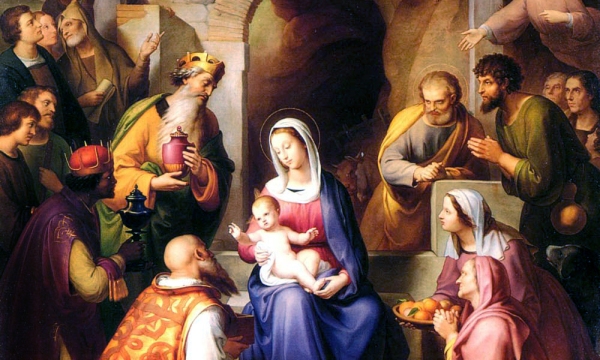 Of all of the obstacles littering my path toward the Catholic Church, none loomed larger than Mary. She represented diversion from true devotion to Our Lord to a plastic (or ceramic or marble) substitute. She was only the box that held the Present; did it honor the Giver to play with the box and ignore the Gift? Depending on which Catholic friend I spoke to, I heard qualities attributed to her that bordered on divinity, including titles such as Queen of Heaven and Mother of God. How could I reconcile the love for Jesus which I shared in common with Catholic brothers and sisters with the antagonism I felt toward Mary, His mother?

One day I finally realized I had never asked God what He thought of Mary. He spoke to my heart some of the beautiful titles from Scripture that I only later discovered were part of the Litany of the Blessed Virgin Mary. In my journal I wrote, “pure vessel, Ark of the Covenant, and beloved daughter.” God beckoned to me to follow Him, looking at Mary from His perspective.

I discovered that the Catholic Church taught that Mary was only a creature; however, she was the only mother whose Son created her. She was sinless because her Son saved her from sin from the moment of her conception. Just as God has saved us from committing various sins by saving us before we were tempted, so He saved Mary from committing any sins by saving her first. Mary’s gift of sinlessness was not a matter of pride for her, but one of deep humility. She owed her entire salvation, as we do, to the mercy of God. She did not exalt herself; rather, the Lord is the One who exalted her for our benefit.

We carefully differentiate between veneration of Mary, which is good and right, and adoration of Mary, which the Catholic Church condemns as idolatry. For Protestants, worship consists of songs, prayer, and a sermon. On a Marian feast day, since Catholics have songs about Mary, prayers to Mary, and a homily about Mary, Protestants can feel offended that we have “worshipped” her. However, as Catholics, we define adoration as sacrifice and veneration as honoring those whom God honors. For example, we would never offer Mary’s body as a sacrifice nor do we sacrifice to her, though we do honor Mary and the saints as, we believe, God does.

Marian feast days are great opportunities to increase our family’s appreciation for God’s work through Mary. Candlelight and special desserts highlight the specialness of the day—there’s nothing quite like fire and sugar to get kids’ attention.

I find it helpful to draw my children’s hearts toward Mary by describing her part in the mysteries of the Rosary or her place at the various Stations of the Cross. On a recent pilgrimage to the Holy Land, we talked about her role in salvation history as we visited Nazareth, Cana, Bethlehem, and Jerusalem. As our appreciation grows for Mary, our gratitude grows for God who gave her to us.

One day Scott called to our infant son, Jeremiah, “Come to Daddy!” We both watched as he made a gallant effort to crawl as quickly as he could on the slick wood floor. Seeing Jeremiah’s struggle, I ran to his side, scooped him up, and raced over to Scott, dropping him into Scott’s waiting arms. As we laughed together, Scott and I suddenly looked at each other and said, “Mary.” I had never before understood why Catholic friends would say that Mary was a quicker way to get to the Father through the Son; now I had just enacted physically what she does spiritually. She helps us in our struggle to reach the Father.

As beloved disciples at the foot of the Cross, let’s welcome Our Lord’s mother as our own into our hearts and homes. Let’s imitate Mary’s faith-filled obedience with our own “Yes” to the call of God on our lives. And let’s invoke Mary’s assistance to guide us to her Son, and through Him to the Father, by the working of the Holy Spirit.

Kimberly Hahn is an internationally known speaker and author. This post is adapted from the article “Mary, Full of Grace” in Scripture and the Mystery of the Mother of God, part of the Catholic for a Reason series.