No one treats Mary like a queen more than Catholics. We honor her as our royal mother in numerous ways. We sing the famous “Hail Holy Queen enthroned above . . .” When we pray the Rosary, we honor Mary as the crowned queen in the fifth glorious mystery. All over the world, statues and paintings express the Blessed Mother’s royal office by portraying her with a crown on her head. We even have a special feast day dedicated specifically to celebrate her queenship over heaven and earth (August 22).

Yet all this royal attention given to the mother of Jesus might sound scandalous to some non-Catholic ears. After all, isn’t calling Mary “queen” going a little too far? The Bible doesn’t mention anything about there being a queen in God’s kingdom. Paying homage to Mary as some type of royal mother seems to detract from the absolute kingship of Jesus Christ which belongs to Him alone! And besides, how could Mary be a queen since she is not the wife of the king Jesus, but only His mother?

These are good questions, and they deserve good answers. It is true that Christians throughout the centuries have honored Mary as some type of royal mother. From early Church Fathers such as Saint Jerome, Saint Augustine, and Saint Ephrem to modern teachings from Vatican II, Pope John Paul II, and the Catechism of the Catholic Church, Christians throughout the ages have recognized Mary’s queenship. But where did this idea come from? Where does Scripture teach that Mary should be honored as queen?

There is one biblical theme which sheds light on these issues and serves as a key for unlocking the mystery of Mary’s queenship. This theme is the Old Testament tradition of the “queen mother” in the Davidic kingdom.

You probably have seen this many times before. You’re watching a big football game on national television, and some star player scores a clutch touchdown. His teammates quickly surround him jumping up and down together for a grand celebration of male bonding in the end zone. At the height of the celebration, when the TV zooms in for a close-up, you see him look into the camera and scream out two words: “Hi Mom!”

You’ve got to wonder: Many of these football players probably have wives or girlfriends at home watching them on TV. Why don’t these guys say “hi” to them? Why is it that mom always seems to receive the special attention?

We find a similar situation in ancient Israel. Even then, mothers were singled out for special treatment by their sons, especially in the royal household of the kingdom of Judah. Among all the ladies in the kingdom, there was no one more honored than the king’s mother. Even the king’s wife could not compete with the prestigious role of the mother.

What made the mother of the king so special? In the Davidic monarchy, as well as in other ancient kingdoms in the Near East, the king’s mother held the most important office in his royal court. She influenced political, economic, and liturgical affairs in the kingdom, and she played a key part in the process of dynastic succession. What is most striking, however, is the fact that she even ruled as queen. It was not the king’s wife who held the queenship, but his mother!

The great preeminence of the king’s mother may seem odd from our modern Western perspective. Today, we generally think of a queen as being the wife of a king. However, when we consider the fact that most ancient Near Eastern kings practiced polygamy and had large harems, the idea of a queen mother makes a lot of sense. Think of King Solomon, who had 700 wives (1 Kings 11:3). Imagine the chaos in the royal court if all 700 wives were awarded the queenship! But since each king had only one mother, one can see the practical wisdom in bestowing the queenship upon her.

This background is crucial for understanding what the Bible teaches about Mary’s queenship. If we search the Scriptures for a royal woman like the queens in modern Western monarchies, we won’t find her. Yet, once we grasp the biblical concept of the queen mother, Mary’s royal office will jump off the pages of the New Testament and call us to a profound relationship with our queenly mother in the kingdom of Jesus.

In the Davidic kingdom, when a new king assumed the throne, his mother was given the special title gebirah, which in Hebrew means “great lady” or “queen.” As queen mother, she possessed the second most powerful position in the kingdom—second only to the king himself.

In ancient Israel, the queen mother was no mere figurehead. Rather, she held an actual office with real authority in the kingdom. In fact, the prophet Jeremiah described how she shared in the king’s rule over the people and even possessed a throne and a crown of her own—symbolic of her royal power.

As in the Old Testament, so in the New. Luke’s Gospel has much to say about Mary’s royal office. In fact, in the scene of the Annunciation, Luke shows us that Mary was given the vocation to be the queen mother in the kingdom of Jesus.

When the angel Gabriel appeared to Mary, she was told she would become the mother of a royal Son who would restore the Davidic kingdom. This child would be the fulfillment of many prophecies which foretold how the Messiah would establish God’s kingdom and reign forever (2 Sam 7; Psalm 2, 72, 89). First, the angel Gabriel is said to appear to a virgin betrothed to a man “of the house of David” (Luke 1:27). Then, the angel told Mary:

And behold, you will conceive in your womb and bear a son, and you shall call his name Jesus. He will be great, and will be called Son of the Most High; and the Lord God will give to him the throne of his father David, and he will reign over the house of Jacob forever; and of his kingdom there will be no end. (Luke 1:31-33)

If an ancient Jew heard of a woman in the house of David giving birth to a new Davidic king, he would easily conclude that she was a queen mother. And that’s exactly the vocation to which Mary is being called at the Annunciation. She is the queen mother of the one who will sit on “the throne of his father David” and of whose “kingdom there will be no end.”

We must emphasize, however, that in honoring Mary as queen mother, we do not take anything away from Christ. In fact, understanding Mary as queen mother emphasizes how she is completely subordinate to Christ. Just as the queen mother’s royal office was based entirely on her son’s kingship, so too Mary’s exalted position in the kingdom depends entirely on her Son, Jesus. In this light, Mary’s queenship in no way diminishes Christ’s kingship, but rests completely on it. In fact, we exalt Jesus even more by honoring her as queen because in doing so, we praise Him for the great work He has done in her and through her queenship. As Vatican II taught, “Mary’s function as mother of men in no way obscures or diminishes this unique mediation of Christ, but rather shows its power” (Lumen Gentium 60; CCC 970). 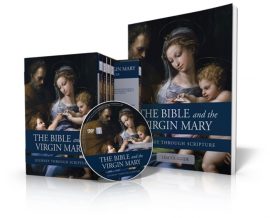 Learn more about Mary’s central role in salvation history in The Bible and the Virgin Mary. In twelve video lessons, a Participant Workbook, Leader Guide, and supplemental resources, you'll discover the biblical basis for the Church's teachings on Mary.