On Friar for God 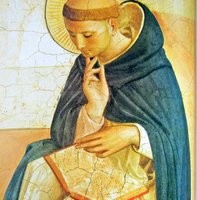 In his Wednesday Audience, Pope Benedict discussed St. Dominic saying, “This great Saint reminds us that in the heart of the Church a missionary fire must always burn. It must be a constant incentive to make the first proclamation of the Gospel and, wherever necessary, a new evangelization.” Read the rest of the Holy Father’s General Audience below.

Last week I presented the luminous figure of Francis of Assisi; today I want to talk about another Saint of the same period who made a fundamental contribution to the renewal of the Church of his time: St Dominic, the Founder of the Order of Preachers, also known as Dominican Friars.

His successor at the head of the Order, Bl. Jordan of Saxony, gives a complete picture of St Dominic in the text of a famous prayer: “Your strong love burned with heavenly fire and God-like zeal. With all the fervour of an impetuous heart and with an avowal of perfect poverty, you spent your whole self in the cause of the Apostolic life” and in preaching the Gospel. It is precisely this fundamental trait of Dominic’s witness that is emphasized: he always spoke with God and of God. Love for the Lord and for neighbour, the search for God’s glory and the salvation of souls in the lives of Saints always go hand in hand.

Dominic was born at Caleruega, Spain, in about 1170. He belonged to a noble family of Old Castile and, supported by a priest uncle, was educated at a famous school in Palencia. He distinguished himself straight away for his interest in the study of Sacred Scripture and for his love of the poor, to the point of selling books, that in his time were a very valuable asset, in order to support famine victims with the proceeds.

Ordained a priest, he was elected canon of the Cathedral Chapter in Osma, his native diocese. Although he may well have thought that this appointment might bring him a certain amount of prestige in the Church and in society, he did not view it as a personal privilege or as the beginning of a brilliant ecclesiastical career but, rather, as a service to carry out with dedication and humility. Are not a career and power temptations from which not even those who have a role of guidance and governance in the Church are exempt? I recalled this a few months ago during the consecration of several Bishops: “We do not seek power, prestige or esteem for ourselves…. We know how in civil society and often also in the Church things suffer because many people on whom responsibility has been conferred work for themselves rather than for the community” (16 September 2009).

The Bishop of Osma, a true and zealous Pastor whose name was Didacus, soon spotted Dominic’s spiritual qualities and wanted to avail himself of his collaboration. Together they went to Northern Europe, on the diplomatic missions entrusted to them by the King of Castile. On his travels Dominic became aware of two enormous challenges for the Church of his time: the existence of people who were not yet evangelized on the northern boundaries of the European continent, and the religious schism that undermined Christian life in the South of France where the activity of certain heretical groups was creating a disturbance and distancing people from the truth of the faith. So it was that missionary action for those who did not know the light of the Gospel and the work of the re-evangelization of Christian communities became the apostolic goals that Dominic resolved to pursue.

It was the Pope, to whom the Bishop Didacus and Dominic went to seek advice, who asked Dominic to devote himself to preaching to the Albigensians, a heretical group which upheld a dualistic conception of reality, that is, with two equally powerful creator principles, Good and Evil. This group consequently despised matter as coming from the principle of evil. They even refused marriage, and went to the point of denying the Incarnation of Christ and the sacraments in which the Lord “touches” us through matter, and the resurrection of bodies. The Albigensians esteemed the poor and austere life in this regard they were even exemplary and criticized the riches of the clergy of that time. Dominic enthusiastically accepted this mission and carried it out with the example of his own poor and austere existence, Gospel preaching and public discussions. He devoted the rest of his life to this mission of preaching the Good News. His sons were also to make St Dominic’s other dreams come true: the mission ad gentes, that is, to those who do not yet know Jesus and the mission to those who lived in the cities, especially the university cities where the new intellectual trends were a challenge to the faith of the cultured.

This great Saint reminds us that in the heart of the Church a missionary fire must always burn. It must be a constant incentive to make the first proclamation of the Gospel and, wherever necessary, a new evangelization. Christ, in fact, is the most precious good that the men and women of every time and every place have the right to know and love! And it is comforting to see that in the Church today too there are many pastors and lay faithful alike, members of ancient religious orders and new ecclesial movements who spend their lives joyfully for this supreme ideal, proclaiming and witnessing to the Gospel!

Many other men then joined Dominic de Guzmán, attracted by the same aspiration. In this manner, after the first foundation in Toulouse, the Order of Preachers gradually came into being. Dominic in fact, in perfect obedience to the directives of the Popes of his time, Innocent iii, and Honorius iii, used the ancient Rule of St Augustine, adapting it to the needs of apostolic life that led him and his companions to preach as they travelled from one place to another but then returning to their own convents and places of study, to prayer and community life. Dominic wanted to give special importance to two values he deemed indispensable for the success of the evangelizing mission: community life in poverty and study.

First of all Dominic and the Friars Preachers presented themselves as mendicants, that is, without vast estates to be administered. This element made them more available for study and itinerant preaching and constituted a practical witness for the people. The internal government of the Dominican convents and provinces was structured on the system of chapters which elected their own superiors, who were subsequently confirmed by the major superiors; thus it was an organization that stimulated fraternal life and the responsibility of all the members of the community, demanding strong personal convictions. The choice of this system was born precisely from the fact that as preachers of the truth of God, the Dominicans had to be consistent with what they proclaimed. The truth studied and shared in charity with the brethren is the deepest foundation of joy. Blessed Jordan of Saxony said of St Dominic: “All men were swept into the embrace of his charity, and, in loving all, he was beloved by all…. He claimed it his right to rejoice with the joyful and to weep with the sorrowful” (Libellus de principiis Ordinis Praedicatorum autore Iordano de Saxonia, ed. H.C. Scheeben [Monumenta Historica Sancti Patris Nostri Dominici, Romae, 1935].

Secondly, with a courageous gesture, Dominic wanted his followers to acquire a sound theological training and did not hesitate to send them to the universities of the time, even though a fair number of clerics viewed these cultural institutions with diffidence. The Constitutions of the Order of Preachers give great importance to study as a preparation for the apostolate. Dominic wanted his Friars to devote themselves to it without reserve, with diligence and with piety; a study based on the soul of all theological knowledge, that is, on Sacred Scripture, and respectful of the questions asked by reason. The development of culture requires those who carry out the ministry of the Word at various levels to be well trained. I therefore urge all those, pastors and lay people alike, to cultivate this “cultural dimension” of faith, so that the beauty of the Christian truth may be better understood and faith may be truly nourished, reinforced and also defended. In this Year for Priests, I ask seminarians and priests to esteem the spiritual value of study. The quality of the priestly ministry also depends on the generosity with which one applies oneself to the study of the revealed truths.

Dominic, who wished to found a religious Order of theologian-preachers, reminds us that theology has a spiritual and pastoral dimension that enriches the soul and life. Priests, the consecrated and also all the faithful may find profound “inner joy” in contemplating the beauty of the truth that comes from God, a truth that is ever timely and ever alive. Moreover the motto of the Friars Preachers contemplata aliis tradere helps us to discover a pastoral yearning in the contemplative study of this truth because of the need to communicate to others the fruit of one’s own contemplation.

When Dominic died in 1221 in Bologna, the city that declared him its Patron, his work had already had widespread success. The Order of Preachers, with the Holy See’s support, had spread to many countries in Europe for the benefit of the whole Church. Dominic was canonized in 1234 and it is he himself who, with his holiness, points out to us two indispensable means for making apostolic action effective. In the very first place is Marian devotion which he fostered tenderly and left as a precious legacy to his spiritual sons who, in the history of the Church, have had the great merit of disseminating the prayer of the Holy Rosary, so dear to the Christian people and so rich in Gospel values: a true school of faith and piety. In the second place, Dominic, who cared for several women’s monasteries in France and in Rome, believed unquestioningly in the value of prayers of intercession for the success of the apostolic work. Only in Heaven will we understand how much the prayer of cloistered religious effectively accompanies apostolic action! To each and every one of them I address my grateful and affectionate thoughts.

Dear brothers and sisters, may the life of Dominic de Guzmán spur us all to be fervent in prayer, courageous in living out our faith and deeply in love with Jesus Christ. Through his intercession, let us ask God always to enrich the Church with authentic preachers of the Gospel.