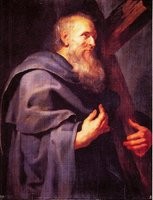 While we continue to outline the features of the various Apostles, as we have been doing for several weeks, today we meet Philip. He always comes fifth in the lists of the Twelve (cf. Mt 10: 3; Mk 3: 18; Lk 6: 14; Acts 1: 13); hence, he is definitely among the first.

Although Philip was of Jewish origin, his name is Greek, like that of Andrew, and this is a small sign of cultural openness that must not be underestimated. The information we have on him is provided by John’s Gospel. Like Peter and Andrew, he is a native of Bethsaida (cf. Jn 1: 44), a town that belonged to the Tetrarchy of a son of Herod the Great, who was also called Philip (cf. Lk 3: 1).

The Fourth Gospel recounts that after being called by Jesus, Philip meets Nathanael and tells him: “We have found him of whom Moses in the law and also the prophets wrote, Jesus of Nazareth, the son of Joseph” (Jn 1: 45). Philip does not give way to Nathanael’s somewhat sceptical answer (“Can anything good come out of Nazareth?”) and firmly retorts: “Come and see!” (Jn 1: 46).

In his dry but clear response, Philip displays the characteristics of a true witness: he is not satisfied with presenting the proclamation theoretically, but directly challenges the person addressing him by suggesting he have a personal experience of what he has been told.

The same two verbs are used by Jesus when two disciples of John the Baptist approach him to ask him where he is staying. Jesus answers: “Come and see” (cf. Jn 1: 38-39).

We can imagine that Philip is also addressing us with those two verbs that imply personal involvement. He is also saying to us what he said to Nathanael: “Come and see”. The Apostle engages us to become closely acquainted with Jesus.

In fact, friendship, true knowledge of the other person, needs closeness and indeed, to a certain extent, lives on it. Moreover, it should not be forgotten that according to what Mark writes, Jesus chose the Twelve primarily “to be with him” (Mk 3: 14); that is, to share in his life and learn directly from him not only the style of his behaviour, but above all who he really was.

Indeed, only in this way, taking part in his life, could they get to know him and subsequently, proclaim him.

Later, in Paul’s Letter to the Ephesians, one would read that what is important is to “learn Christ” (4: 20): therefore, not only and not so much to listen to his teachings and words as rather to know him in person, that is, his humanity and his divinity, his mystery and his beauty. In fact, he is not only a Teacher but a Friend, indeed, a Brother.

How will we be able to get to know him properly by being distant? Closeness, familiarity and habit make us discover the true identity of Jesus Christ. The Apostle Philip reminds us precisely of this. And thus he invites us to “come” and “see”, that is, to enter into contact by listening, responding and communion of life with Jesus, day by day.

Then, on the occasion of the multiplication of the loaves, he received a request from Jesus as precise as it was surprising: that is, where could they buy bread to satisfy the hunger of all the people who were following him (cf. Jn 6: 5). Then Philip very realistically answered: “Two hundred denarii would not buy enough bread for each of them to get a little” (Jn 6: 7).

Here one can see the practicality and realism of the Apostle who can judge the effective implications of a situation.

We then know how things went. We know that Jesus took the loaves and after giving thanks, distributed them. Thus, he brought about the multiplication of the loaves.

It is interesting, however, that it was to Philip himself that Jesus turned for some preliminary help with solving the problem: this is an obvious sign that he belonged to the close group that surrounded Jesus.

On another occasion very important for future history, before the Passion some Greeks who had gone to Jerusalem for the Passover “came to Philip… and said to him, “Sir, we wish to see Jesus’. Philip went and told Andrew; Andrew went with Philip and they told Jesus” (cf. Jn 12: 20-22).

Once again, we have an indication of his special prestige within the Apostolic College. In this case, Philip acts above all as an intermediary between the request of some Greeks – he probably spoke Greek and could serve as an interpreter – and Jesus; even if he joined Andrew, the other Apostle with a Greek name, he was in any case the one whom the foreigners addressed.

This teaches us always to be ready to accept questions and requests, wherever they come from, and to direct them to the Lord, the only one who can fully satisfy them. Indeed, it is important to know that the prayers of those who approach us are not ultimately addressed to us, but to the Lord: it is to him that we must direct anyone in need. So it is that each one of us must be an open road towards him!

These words are among the most exalted in John’s Gospel. They contain a true and proper revelation. At the end of the Prologue to his Gospel, John says: “No one has ever seen God; the only Son, who is in the bosom of the Father, he has made him known” (Jn 1: 18).

Well, that declaration which is made by the Evangelist is taken up and confirmed by Jesus himself, but with a fresh nuance. In fact, whereas John’s Prologue speaks of an explanatory intervention by Jesus through the words of his teaching, in his answer to Philip Jesus refers to his own Person as such, letting it be understood that it is possible to understand him not only through his words but rather, simply through what he is.

To express ourselves in accordance with the paradox of the Incarnation we can certainly say that God gave himself a human face, the Face of Jesus, and consequently, from now on, if we truly want to know the Face of God, all we have to do is to contemplate the Face of Jesus! In his Face we truly see who God is and what he looks like!

The Evangelist does not tell us whether Philip grasped the full meaning of Jesus’ sentence. There is no doubt that he dedicated his whole life entirely to him. According to certain later accounts (Acts of Philip and others), our Apostle is said to have evangelized first Greece and then Frisia, where he is supposed to have died, in Hierapolis, by a torture described variously as crucifixion or stoning.

Let us conclude our reflection by recalling the aim to which our whole life must aspire: to encounter Jesus as Philip encountered him, seeking to perceive in him God himself, the heavenly Father. If this commitment were lacking, we would be reflected back to ourselves as in a mirror and become more and more lonely! Philip teaches us instead to let ourselves be won over by Jesus, to be with him and also to invite others to share in this indispensable company; and in seeing, finding God, to find true life.

I warmly welcome all the English-speaking pilgrims present at this Audience, including members of the Brothers of Charity Services in County Cork, Ireland, and the staff and students from St Joseph’s Institute in Copenhagen. May your time in Rome deepen your love of Christ and his Church. Upon you all I invoke God’s abundant Blessings!

Lastly, I greet the young people, the sick and the newly-weds. Dear young people, in returning from the holidays to your usual activities may you also resume the regular rhythm of your dialogue with God, spreading his light and his peace around you. Dear sick people, may you find comfort in the Lord Jesus, who continues his work of Redemption in every human being’s life. And you, dear newly-weds, may you strive to keep constantly in touch with God, so that your love may be ever truer, more fruitful and more enduring.

I would finally like to entrust to the prayers of you all the Apostolic Journey I will make to Germany that begins this Saturday. I thank the Lord for the opportunity he has given me to go to Bavaria, my native Land, for the first time since my election as Bishop of Rome. Please accompany me, dear friends, on my Visit, which I entrust to the Blessed Virgin. May she guide my steps and obtain for the German People a new springtime of faith and civil progress.