Praying for Our Leaders: Thoughts from St. Teresa of Avila 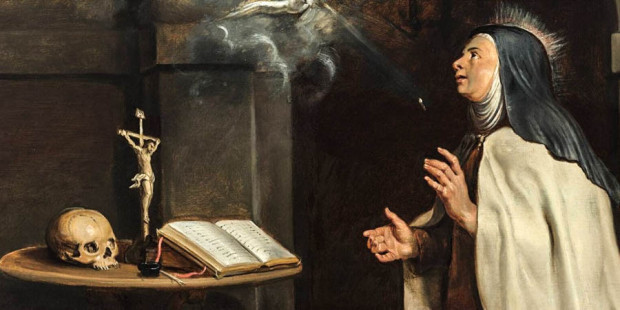 To His Sacred, Imperial, and Catholic Majesty, the King Our Seigneur

St. Teresa informs King Philip II that the Carmelite Order is praying for him; she asks a favor.

May the grace of the Holy Spirit ever be with your Majesty! Amen.

I feel sure that your Majesty is aware that I persevere in recommending you to our Lord in my poor prayers. And although, considering what a wretched creature I am, it is rendering you but little service, yet I do you some good by inciting the Discalced nuns to pray for you, as I know that they serve God faithfully. The community in this convent intercedes for your Majesty, for our Lady the Queen, and for the Prince, to whom may God grant a very long life. Special prayer was offered on the day on which the oath of allegiance was tendered to his Royal Highness. As we shall persevere in our petitions, your Majesties will benefit by the growth of our Order. I therefore venture to beg your Majesty to support us upon certain points which the licentiate Juan de Padilla will notify to you. I leave the matter to him and ask your Majesty to credit his word. His zeal is such that I have entrusted the affair entirely to him, as if it became public, the object for which we are striving, which is solely for the honor and glory of God, would be defeated. May the divine Majesty preserve you for many years as the welfare of Christendom requires! In these days of trials and persecutions, it is a great consolation that God should have provided for the Church such a valiant defender and aid as your Majesty.

From the Convent of the Incarnation, Avila.

Your Majesty’s unworthy servant and subject,

St. Teresa’s commitment to intercessory prayer for the leaders of her time was both reflective of a primary personal concern for their souls and also for the practical realities of the need for wise leaders.

Phillip II, whom she addresses here, understood the importance of the contemplative vocation and was devoted to building a genuinely Christian society in Spain. With brilliant daring and at great personal cost, Phillip II had been staunch in promoting the faith both inside and outside the Church. Shortly before Teresa wrote this letter, Phillip turned back an Islamic naval invasion at the Battle of Lepanto, but now faced a second naval assault. In northern Europe, he had recently quelled an iconoclastic rampage, but heterodox zealots were now preparing a violent rebellion. In other words, Teresa is promising her prayers to a leader whose plans have gone amiss even though he was committed to doing everything for the honor and glory of God.

Instead of criticizing or abandoning him, she stands in solidarity with him in prayer. This solidarity is not based on a passive wish: open to a real mutual concern, this prayerful love compels her to invite him to aid her efforts to promote a way of life rooted in mental prayer. The intercessory prayer that comes out of this kind of life is the path to peace and communion, not because of an absence of conflict, but in spite of it. In fact, the renewal of mystical prayer that Spain comes to enjoy under Phillip II is arguably one of the most perduring achievements of his reign.

Teresa’s heart clearly mirrors the heart of God who is concerned about all our plans and failures, personal and social. He not only wants us to know His faithfulness when we are under fire, but He also invites us into ever greater works, even as our own plans seem to be falling apart. Her prayer and confident invitation are in perfect harmony with St. Paul’s admonition in his first letter to Timothy:

First of all, then, I urge that supplications, prayers, intercessions, and thanksgivings be made for all men, for kings and all who are in high positions, that we may lead a quiet and peaceable life, godly and respectful in every way. This is good, and it is acceptable in the sight of God our Savior, who desires all men to be saved and to come to the knowledge of the truth. (1 Tim 2:1–4)

If we, like St. Teresa, wish to daily live in peace with respect to our civil leaders, we must bear in our hearts this same commitment to pray for them diligently and regularly, while not failing to find ways to invite them to take part in the greater works God is accomplishing in the world.

Anthony Lilles is an author and theologian who serves in the Archdiocese of Los Angeles as academic dean of St. John’s Seminary and academic adviser to Juan Diego House. Dan Burke is the executive director of EWTN’s National Catholic Register. Together they compiled reflections on the letters of St. Teresa of Avila in 30 Days with Teresa of Avila.