By Steven A. Christie

Here are a few basic fast facts to help prepare you to defend the right to life.

Embryo: The unborn from the end of Week 1 through Week 8

Fetus: The unborn from the end of Week 8 until birth

Human Being: A member of the species Homo sapiens

Life/Alive/Living: Whether something is “alive” is a purely scientific question that science has fully settled. To be “alive,” the following criteria must be met:

All seven of these criteria for life are met at conception. This is a biological fact attested to by the American College of Pediatricians and nearly every embryology textbook used in medical schools.7 Even Planned Parenthood has admitted that life begins at conception, stating in one of their very own publications that “abortion kills life after it has begun.”

Person: Defining “person” does not require complex philosophical or metaphysical analysis, despite claims to the contrary. Its definition is clear and simple, and found in nearly every dictionary. As Merriam-Webster states, as its very first definition, a “person” is a “human.”

Body Part: Science defines “body part” as a structure that shares the same genetic code as the rest of the body (e.g., appendix, arm, tonsils, or heart) and does not direct its own development.

Day 1: A fully alive human being, with unique DNA

Dr. Steven Christie is a physician specializing in oncologic radiology and body imaging. He is a Diplomate of the American Board of Radiology. He is also an attorney and member of the Florida Bar. Aside from his medical and legal work, Dr. Christie also lectures regularly on Catholic social issues, particularly marriage, family, and the dignity of life. He and his wife, Dr. Grazie Christie, live in the Miami area and are the proud parents of five children. 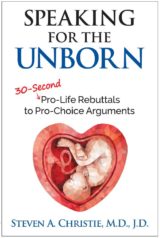 The Pro-Life cause is a winning one, and Pro-Life advocates must be able to articulate our powerful and persuasive reasons to anyone who asks.

Speaking for the Unborn: 30-Second Pro-Life Rebuttals to Pro-Choice Arguments is designed to make sure Pro-Life advocates are fully prepared for this great challenge. It presents the best rebuttals to every Pro-Choice argument made in support of abortion—rebuttals based on science, the law, reason, social justice and morality.