Do Catholics Believe in Ghosts?: Church Teaching on Purgatory

Catholicism is clear on the existence of a soul that survives the body, an accounting before God, and an eternal condition in either heaven or hell. Catholics also believe in purgatory: a temporary condition for the soul that has passed personal judgment but still has the temporal component of sins to atone for before attaining the beatific vision. There is a tradition within the Church of offering Masses and prayers for the dead in order to speed this purgation.

Many of the saints wrote of apparitions of souls appearing to them asking for prayer, penance, or Masses in reparation for their sins. After these were completed the saint was often allowed a final visitation from these souls as they ascended to heaven. There are many Church-approved books describing instances of souls manifesting to the living to signal their need for prayer.

Though souls in purgatory have sometimes been allowed to speak to the saints, it usually does not happen to the average person. The Bible is clear about the prohibition against speaking to the dead (Deut 18:10–13). Doing so represents a loss of trust in God by seeking to bypass Him and instead seek out the help of a lesser spirit or medium as a source of comfort, guidance, or information. This is a violation of the first of the Ten Commandments.

In the case of saints who have spoken to spirits, they did not summon spirits or seek guidance, information, or comfort from them. Once the spirit requested prayer, communication stopped on both sides. It is interesting to note that in most cases of spirit communication involving paranormal investigators, the first thing said by the spirit is: “Help me.” Sadly, most people do not know how to pray for the dead and so no help is forthcoming. Any communication beyond this is almost certainly demonic deception.

Some of the typical indications that a human soul in purgatory may be present are sounds of a person walking or pacing, odors that were associated with that person, knocks on the walls, and, in cases of suicide, a heavy and sad feeling in the area where the suicide occurred. There is almost always a lack of speech on the part of these souls outside of the single phrase “Help me” or “Yes” in response to the question “Do you need prayer?” The souls in purgatory are aware of God’s prohibitions about seeking information from the dead (see Deut 18:9–14; Lev 19:31 and 20:6; Is 8:19; and others) and so would never draw the living into this sin by communication beyond a need for prayer or Masses.

The most common type of human spirit haunting cases are the souls of people who have committed suicide as well as murder victims. These souls usually create a very strong feeling and effect of sadness, depression, and malaise near where they died. They may cause some manifestation, such as knocking or banging at the time they died or when they are talked about. One has to be careful because demons can take advantage of a known suicide or murder and pose as the victim in that location. Also, a demon that helped encourage a murder or suicide could still be there. The other types of human spirit haunting that are common occur in churches and religious housing such as rectories or monasteries.

In many cases where people have engaged in paranormal investigations, signs both of souls in purgatory and demons are present. This is because the demons are attracted to places where people have attempted to communicate with spirits. By seeking occult knowledge from a spirit, people give demons license to manifest and respond. In these situations there is often an initial communication—essentially, “help me”—followed by a pause and then some manipulative and deepening communication. In this situation a demon is simply taking advantage of an opened door. People will usually describe the initial non-destructive signals and their attempts to have dialogue with the spirit as being followed by an escalation of negativity and violence that led them to call the Church for help.

If a case seems to be a genuine human spirit haunting, the usual remedy is the Mass or praying the Office of the Dead in the location. It seems that it is often most effective to say the Mass in the place where the person died, but this is not required. An abbreviated subset of the Office of the Dead has also been used in many cases with success. These prayers need to be said in charity and love. Additional prayers may need to be offered as well. 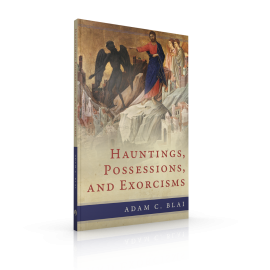 How do you fight an enemy you can’t see? In this field guide to defense against the demonic, Adam Blai, an expert in religious demonology and exorcism for the diocese of Pittsburgh, shares information and advice gained over years of extensive experience with the paranormal. Review the scriptural evidence about demons—who were cast down to earth, not hell—and the tricks they play to try to gain influence in our lives. You’ll also discover the tools the Church has developed for us to combat and resist the forces of evil. Written in an easy-to-read style, Hauntings, Possessions, and Exorcisms is perfect for the Catholic looking to learn more about the invisible forces hell-bent on the destruction of your soul—and how to claim the victory Christ has already won.