Maura Roan McKeegan is the author of several picture books, including St. Conrad and the Wildfire and the award-winning Old and New Series.

One of my earliest memories is of a time my father took me to the hardware store. I was young—maybe seven years old. I don’t know what we were getting or why we were there, but the memory has never left me.

After my father purchased whatever it was he was buying, we left the store. As we walked to the car, he counted his change. Suddenly, he turned around.

“We have to go back inside,” he said.

When we got back in the store, he walked up to the counter, to the same cashier who had checked him out.

“Can I help you?” she asked. Seeing my dad with the receipt in his hand, she was probably expecting him to argue about being overcharged.

“Yes, you gave me too much change,” he said, handing her the extra money.

The exchange took under a minute. The lesson lasted a lifetime. In that moment, I learned that my father was a man who valued the truth, even when it wasn’t in his favor. And my young mind preserved the memory because it inspired me to value truth, too.

Ten years later, when I was in high school, my dad came to pick me up at the church rectory, where my religious education class met every week. I was supposed to have been in class that night, but instead I had ditched it to hang out with friends. I drove up with my friend and saw my dad waiting for me in his car. He was there early, and I had miscalculated my arrival. I quickly made up an excuse as I got into the car, telling him that class had ended early and my friend had driven me around from the other parking lot.

“I went in to the rectory and saw your teachers,” my dad said calmly. “They said no one showed up for class tonight. So would you like to tell me where you were and why you just lied to me?”

There was no judgement. No anger. Just calm, sorrowful disappointment. And I felt it deeply.

If he had yelled at me, I might have rebelled even more. But my father didn’t take the lie personally—or at least, he didn’t show me if he did. He just wanted me to value truth.   Obviously, the power of his example hadn’t sunk in yet. But he treated me with respect even though I had failed, and I tucked that away, too, in the recesses of my mind. These childhood memories became building blocks to the architecture of my future, cementing the connection between truth and respect.

Another decade passed. My father died, leaving me holding even more tightly to the memories of my youth. One day, when I was a young adult, I went grocery shopping, and I put a case of beer on the lower shelf of the cart. When I got home, I checked my receipt and noticed that the beer wasn’t on it. I’d forgotten to put it on the counter for the cashier to scan, and I’d left the store without paying for it.

I could have gotten away with it, but there was no way I was going to do anything other than tell the truth. After all, I was my father’s daughter. I called the store and explained what happened.

“That’s okay,” the employee said over the phone. “You can just keep it.”

I ended up with two gifts that day: the free case of beer, and more importantly, the peace of mind that comes with doing the right thing. One gift was from the grocery store; the other was from my dad. He planted the seeds of truth in my heart quietly, not by preaching but by example, without ever knowing how much I would internalize his witness. He didn’t educate me in the importance of honesty—he simply inspired me to be honest by the way he lived his life.

Maybe that is one reason I was drawn to retell the story of St. Conrad of Piacenza in my latest picture book, St. Conrad and the Wildfire. As a young nobleman, Conrad made an egregious error in judgement when he accidentally set a forest on fire and kept his culpability secret. Like me, he made mistakes.

But when a poor peasant was blamed, Conrad rushed to tell the truth at his own expense. Like my dad, Conrad had the courage to be honest. My prayer is that St. Conrad’s example will inspire every child who reads his story to value truth, as much as my father’s example inspired me. 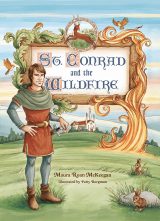 In St. Conrad and the Wildfire, children of all ages will discover the power of truth and forgiveness. Introduce children to St. Conrad through Maura Roan McKeegan’s moving retelling and Patty Borgman’s magnificent illustrations that bring the saint to life.