Ratzinger on Scripture and Revelation: 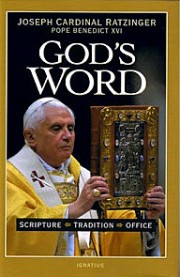 “. . . you can have Scripture without having revelation. For revelation always and only becomes a reality where there is faith. The nonbeliever remains under the veil of which Paul speaks in the third chapter of his Second Letter to the Corinthians. He can read Scripture and know what is in it, can even understand at a purely intellectual level, what is meant and how what is said hangs together—and yet he has not shared in the revelation. Rather, revelation has only arrived where, in addition to the material assertions witnessing to it, its inner reality has itself become effective after the manner of faith. Consequently, the person who receives it also is a part of the revelation to a certain degree, for without him it does not exist. You cannot put revelation in your pocket like a book you carry around with you. It is a living reality that requires a living person as the locus of its presence.”