Raquel Lopez is the associate producer of Journey Through Scripture and Promise & Fulfillment at the St. Paul Center. She earned her Master's degree in theology from Franciscan University of Steubenville.

Scripture study has played a huge part in my faith. It was a Bible study on the Eucharist that really transformed my faith. I remember hearing great things about the study and so I decided to check it out, but I couldn’t have anticipated what it would be like to hear someone speak about the Eucharist who really believed in the Real Presence. That study shook me, and from that moment my life took a different trajectory. I started attending daily Mass, making holy hours, and taking my faith more seriously. And now I work with the St. Paul Center to bring that experience to more Catholics.

That’s one reason I’m so excited about the new study we’re launching at the St. Paul Center. Hosted by Dr. Scott Hahn, The Eucharist in Scripture is a foundational study on the Blessed Sacrament based on Dr. Hahn’s most life-changing talks. Not only did I get to work extensively on it, but I also know exactly the kind of impact a study like The Eucharist in Scripture can have on someone’s life.

I helped a lot with production—essentially the logistics and scheduling—and also did a lot of work in post-production. I made decisions in editing, compiled the workbook, and translated the Spanish subtitles. My role in post-production meant that I listened to Dr. Hahn’s talks many times. But even though I’ve heard them so many times, they still strike an emotional chord. For me, it wasn’t just a mental exercise of editing. Sometimes listening to these talks again would bring tears to my eyes.

When you’re producing resources like this for Scripture study, sometimes it can just become about getting the work done, but when I had to actually sit down and listen to the talks, it reminded me that sometimes the work we do isn’t just work, it’s ministry. Especially when I was translating Dr. Hahn’s talks into Spanish, I had to really ponder what he was trying to convey, and it led me into a deeper contemplation. I could feel it ministering to me, just as I’m working to minister to someone else—one is never above the message.

Working on The Eucharist in Scripture took me back to that first study when I encountered the truth about the Eucharist. I put myself in the audience of people who have never heard this before. I see the potential of people being told for the first time that Jesus is truly present in the Blessed Sacrament and for the first time truly understanding what’s happening at every Mass.

Less than thirty percent of Catholics believe in the Real Presence, let alone know what the Real Presence means. We can’t love what we don’t know, and so many Catholics don’t know the Eucharist. In Ecclesia de Eucaristia, Pope John Paul II said that we need to rekindle “Eucharistic amazement.” I’m excited to see the potential that this study has to enkindle that Eucharistic amazement that we should all have.

This study is particularly exciting because to me it is the perfect study to share with fallen away Catholics or other Christians who don’t understand or who have never heard why we believe what we believe about the Eucharist. Dr. Hahn speaks with such authority and does such a good job explaining the roots of the Eucharist: where we find the institution of the Eucharist in Scripture, what we actually believe is happening at Mass, and showing that the Eucharist was at the center of the faith of the early Christians. In fact, he shows how the New Testament was a sacrament long before it was ever a document—and I think that when people hear the roots of the Mass, they see the Eucharist in a new light.

Hopefully parishes will host this study to help their parishioners better understand their faith. There are six lessons, which makes it the perfect study to do for fall, Advent, or Lent. But I think the real impact is when someone agrees to host a small group study for their friends and extends a personal invitation to people who might not otherwise be open to learning about the Eucharist. For anyone considering hosting a Bible study, I encourage you to take it prayer. God will always give grace to someone He calls to lead Scripture study. This study gives you all the tools you need. And I would say that God always works with your generosity when you give that kind of yes to invite others into His Word.

Wherever you are in your journey with the Eucharist—whether you haven’t encountered the truth about the Real Presence or whether you attend daily Mass— hopefully this will take you deeper in your relationship with Christ.

I’m hopeful that this study will bring many people into an encounter with Christ in the Eucharist. There’s no greater gift than Christ’s gift of Himself in the Blessed Sacrament, and there’s nothing more important than sharing this gift with others. 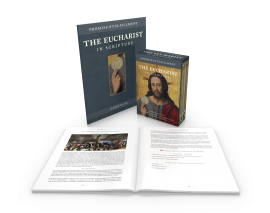 In The Eucharist in Scripture, discover God’s plan as it is expressed through the Bible and the Mass. This six-lesson study, presented by Dr. Scott Hahn, will unlock the meaning of covenant, sacrifice, and sacrament as understood in the Bible, from Genesis through Revelation.