Son of God, Son of Mary 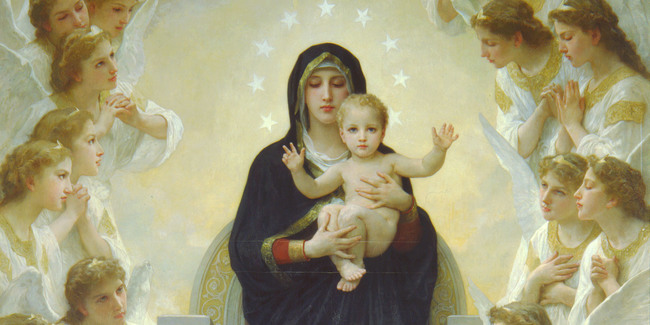 “Who is Jesus Christ?”

The answer to this question is the heart of all Christian doctrine. In a very real way, all of Christian theology is an attempt to answer this question, and it’s not a simple question to answer, for Jesus Christ is the very center of history and the very center of all creation; he is the one through whom everything was made and to whom everything points. Jesus is God, the I AM, the Alpha and the Omega, the one who is and who was and who is to come (Rev 1:8). He also was born of a woman, talked to us, and died on a cross. He is, the Bible tells us, Emmanuel, which means “God-with-us.”

This is the greatest of mysteries. Two thousand years after the Incarnation happened, we often take it for granted, but it would be impossible to exaggerate the significance of God himself becoming a human being. Jesus Christ had God as his Father and a human being, Mary, as his mother. Jesus can truly be called the Son of God, for he came from God, and he can truly be called the Son of Mary, for he took his humanity from her. So, Jesus is really a man and really God. He has a human nature and a divine nature, and yet he is one person: one divine person.

Mary, then, we can say, is literally the Mother of God. For this reason, the Blessed Mother has always held a special place in the heart of Christians. Her faithful response to God’s invitation was crucial in the economy of salvation. Moreover, as Mary’s Son, Jesus fulfills the Protoevangelium by which God announced to Adam and Eve that he would bring about redemption through another man and woman. This is why the Fathers of the Church call Jesus the “New Adam” and Mary the “New Eve.”

At the same time, as the Son of God, Jesus is the second Person of the Trinity. In fact, he is the divine Logos or Word. He reveals all there is to reveal about God not only through his speech but also through his deeds, the things he did. Christ’s communication of who God is and what he wants from us is not just found in his powerful sermons and parables, it is also in the things he did. It is in the path of his life, from a baby in a stable, to the quiet life as a carpenter, to his ministry, betrayal, and death.

This also is why the answer to the question “Who is Jesus?” is a story. The Gospels are the answer to who Jesus is, and they are biographies. Jesus’ whole life and death is the totality of divine Revelation because he is the Word of God itself, and so his whole life requires our attention.

Jesus is the Word of the Father through whom all things came into being. To get an idea of what this means, think of how creative your own words are. We think in words. We form plans and ideas with words. We communicate within ourselves and to others through words. Human words are powerful: they can communicate ideas, they can help people, and they can hurt people. In a similar way, God communicates everything through his Word: Jesus Christ.

The language of God is powerful. It was powerful when he spoke through the prophets of the Old Testament, and it was even more powerful when the Son spoke as a man. But the Word of God, the total communication of God to us, includes all of Jesus Christ, his words and his deeds, and those deeds, just like the communication of a father to his child is both in his words and in his hug—speak powerfully. In Jesus, God doesn’t just say who he is and how much he loves us; he shows us by becoming one of us, walking among us, healing the sick, raising the dead, and dying on a cross for us.

Throughout Salvation History, God had spoken to his people. No sooner did Adam and Eve commit the original sin than did God begin gathering together a people. He spoke to them and shepherded them, revealing bits of himself to them as they developed into a nation. This revelation of the Old Testament was also the Word of God. But, it was not his complete Word. His complete Word was the Incarnation of Jesus Christ.

Importantly, God’s perfect communication of himself didn’t go away when Jesus ascended into heaven. The Church is the Body of Christ, and the Word of God continues within her. The Word of God remains present to the world through his Church. The actual words of God persist in the Scriptures, in the Tradition in the liturgy of the Church. Likewise, the actions of God are preserved in the lives of the faithful, in the liturgical worship, and in the sacraments, especially the Eucharist, through which Christ’s Body is really and truly present. Likewise, the Church continues Jesus’ mission. His mission was a joint mission of the Son and the Holy Spirit, and that remains the case with the Church. The Church is the Mystical Body of Christ and the Holy Spirit guides it. By the power of the Holy Spirit, God’s grace is poured out to the faithful through the sacraments. The mystery of the Church, like that of Christ, is a great mystery. 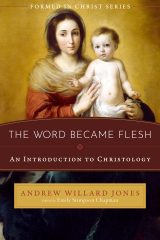 The Formed in Christ series is a solid and faithful resource that provides a thorough treatment of the Catholic faith and the various branches of theology. In The Word Became Flesh: An Introduction to Christology, Andrew Willard Jones draws on Scripture and the Catechism to answer the question of who Jesus is and what this means for us.