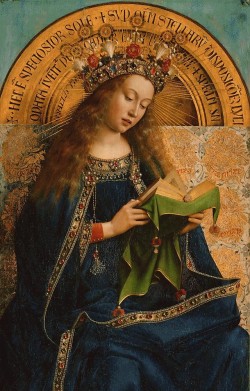 Pope Benedict and Pope Francis have called her the “Star of the New Evangelization.” And the Blessed Virgin Mary is a star — not in the Hollywood sense. But, like a bright light in the night sky, she shows us the way.

Mary is, without rival, the most influential woman in human history. She has no rival. Who has influenced culture, painting, sculpture, architecture, poetry, music as much as she has? We’re transfixed when we see Michelangelo’s Pieta — when we hear the famous “Ave Maria” by Schubert or Bach — or when we step into the vast interior of the medieval cathedrals dedicated to Notre Dame.

The Blessed Virgin makes the world more beautiful. She affects everything for the better.

Look at the root of the word “Evangelize.” It means to bear the Good News. No one has done that better than the Mother we share with Jesus.

That’s one reason why she’s our “Star” in the New Evangelization, but it’s not the greatest reason.

In my opinion, she’s star-like because she goes before us as a model of evangelization. This, I believe, is a fact that many people miss about the Virgin Mary. We think of her as radiant, but static — iconic, a still point to be contemplated.

We miss the fact that she spent much of her earthly life on the move, evangelizing! Remember, it was she who bore the pre-born Jesus into the Hill Country, when she went on her mission to serve her kinswoman Elizabeth. It was Mary who first presented the Redeemer to the Gentiles, in the persons of the Magi. It was Mary who took the infant Jesus to dwell among the Egyptians. And it was Mary who brought him back home.

It was Mary who precipitated Jesus’ first miracle. It was she who advised the stewards at the wedding feast: “Do whatever he tells you.” It was she who remained “close to Jesus to the last,” beneath the cross at Calvary.

And when the Church gathered after Jesus’ ascension, to await the Holy Spirit, the disciples gathered around Mary.

Mary doesn’t talk a lot. She doesn’t waste words. But she’s hardly static. She’s always with Jesus. She’s always serving the needs of others and directing their attention to her divine Son. She is the Star of the New Evangelization because she succeeded so well, and because she lights the way for all her children to follow.

It’s long been my dream to make a pilgrimage to see her miraculous image at Guadalupe, and this year I fulfilled it. There, too, in Mexico, Mary worked quietly to bring Christ to the people. The missionaries had tried to bring the Gospel to the people. The military and the government tried to outlaw the old Aztec religion, which involved terror and human sacrifice. But all failed, in spite of the best intentions.

Then, the Blessed Virgin appeared to an old convert named Juan Diego — a poor man, with no credentials — and soon nine million people entered the Church.

Miraculously, she left her image on his rough garment, his tilma, made of cactus fabric. The relic shouldn’t have lasted fifty years. After five, it should have been falling apart. But now it’s lasted half a millennium, and her image still looks with eyes of mercy upon hundreds of thousands of pilgrims like me.

As I stood at the basilica, it occurred to me: Juan Diego was, like me, a convert to the Catholic faith; and he was my age when he got the revelation. He was considered an “old man” in those days, as he’d already outrun his life expectancy. Yet his evangelistic life was just beginning.

What does God have in store for you and me? Where will he have us go with the joy of the Gospel? We’ve been able to accomplish so much, you and I, working through the St. Paul Center. But we must never grow complacent. Our real work of evangelization, perhaps, is just beginning.

May is Mary’s month, and we look more intently to our Star. I remember you to her, and I hope you remember me and the work we share. I thank you for all you’ve done for this beautiful task.