The Beauty and Challenge of Christianity 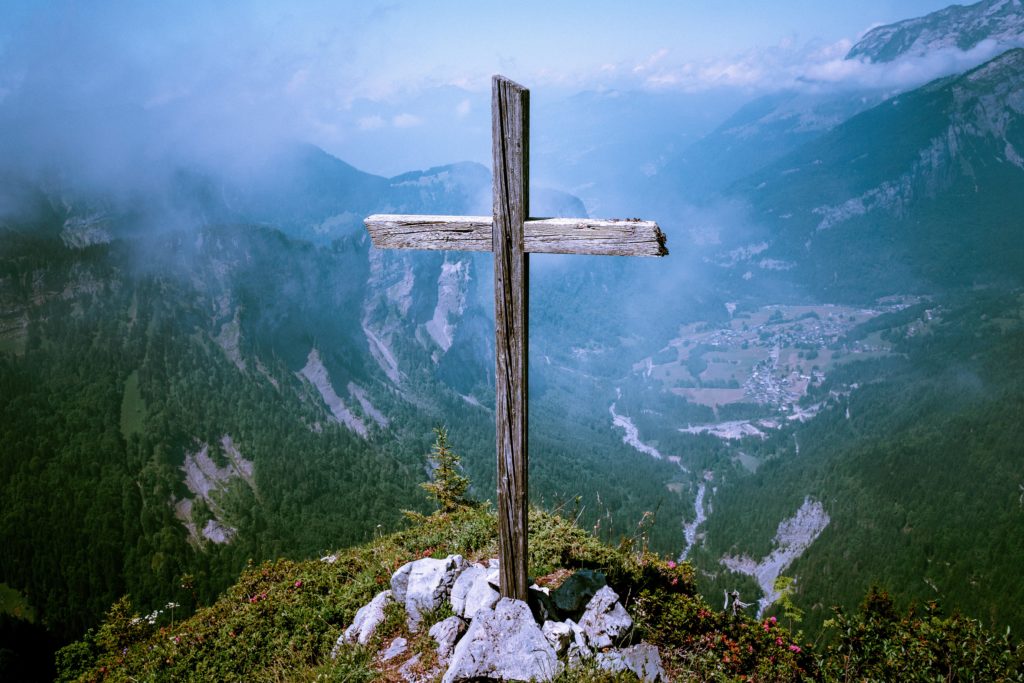 The newness and beauty of Christianity arise from the Gospel’s radical claim that in Jesus of Nazareth we can share God’s life here on earth and forever in heaven. Christ’s love, poured out from the Cross, weds us to himself so that we become one with God, he abiding in us and we in him. The mutual indwelling of this nuptial union enables us to commit ourselves generously to God and neighbor with the same divine love we have received in Jesus. We are thus placed in an entirely new relationship with God, others, and the world which transforms us as persons and makes us members of Christ’s Body and Bride, the Church, sharing in his life and saving work. So it is that eternal life begins for us in this world, a life meant to be perfected in the Wedding Feast of the Lamb when Jesus comes again in glory. This is the goal of every human person, the ultimate meaning of our joys and sorrows, and the cause of our fulfillment and salvation. The mission of the Church and her members is to proclaim this Good News to
the whole world through faithful witness to Christ.

With the passing of time, however, the novelty and beauty of the Gospel can grow dim for us individually and within the life of the Church due to inadvertence, neglect, or sinfulness. The result is that Christian faith and practice begin to seem old, obscure, or burdensome. For this reason, the Church in all her members is said to be semper purificanda (always in need of being purified) through a deepening response to Jesus’ call to share his life in the ongoing renewal known as metanoia (penitence or repentance). That continual conversion fully engages us as persons in heart, mind, soul, and body, enabling a life of loving service to God and neighbor expressed in prayer, self
-sacrifice, and works of mercy. In this way, daily Christian life becomes in joy and in sorrow our sacrificial worship of God and a witness drawing others to him.

Consider for a moment the astonishing wonder of our life in Christ. We are mere creatures, as nothing compared to God. Worse, we are prone to selfish, harmful attitudes and behavior. Yet God chose to create us and to call us to share in his life and work. More than that, he invites us to be wedded to him despite our repeated betrayals and the damage we do to ourselves and others. He asks only that we acknowledge the truth of our sinful situation, live his gifts of nuptial union and metanoia even in the
face of suffering and evil, and be faithful witnesses to the world as members of Jesus’ Body and Bride. This new life transforms us day by day as we participate in Christ’s work of transforming others. We are God’s handiwork, but he has chosen to make us his coworkers in the history and salvation of the world. Imagine all that, if you can. There is no shame in having difficulty comprehending or accepting it. The prophet Isaiah was speaking of this ineffable mystery of salvation when he said, “Who would believe
what we have heard?” (Isa 53:1).

Tragically, among contemporary Christians this nuptial and participatory understanding of our life in Jesus has largely become a matter of pious phrases, a vague memory, or an entirely foreign concept. This has happened because it is humanly impossible to understand or to do what we cannot imagine, and the harsh reality is that many Christians have not meaningfully heard or recognized a fellow Christian professing and living a nuptial relation with God in Christ. Consequently, they are simply unable to imagine such a relationship or, perceiving it dimly, do not realize the radical difference it would make for their lives and for the world. Its centrality to God’s works of creation and salvation remains unknown or unappreciated. This eclipse has led to a crisis of identity and mission for Christians and the Church, particularly in Western societies.

The West is in the midst of an enticing, pervasive cultural process reaching back into the Middle Ages which within Christianity has tended to reduce salvation to the pardon of sin and the promise of heaven with little or no consideration of our nuptial life with Jesus or of our need for daily transformation through sacrificial love in service to God, neighbor, and the world. Within civil society, the same process has produced an ever-intensifying individualism and secularism which seek autonomous self-fulfillment
and the communal affirmation of self-constructed identities and worldviews. As has happened repeatedly in the history of Israel and the Church, mistaken beliefs and practices among God’s people have combined with erroneous ways of thinking and acting in the broader culture to produce a harmful syncretism (i.e., a mixture or “hodge
-podge”) which professes continued fidelity but in reality distorts our understanding of God and our covenant relation to him. Over the course of recent centuries, this
syncretism has created a highly individualistic “gospel” that evaluates life based on a person’s own experiences and feelings as interpreted by private conscience. In the most progressive form, it tends to view older understandings of the Gospel as unattainable ideals or outmoded conventions that need to be replaced by more welcoming and comforting approaches which have been adapted to current worldviews by minimizing or avoiding judgment and the Cross.

Instead of acknowledging Christ as the way, the truth, and the life in whom we discover the true meaning of our identity and purpose as children of God, contemporary syncretism depicts him as an example of the fashionable sensibilities it wants us to adopt. While claiming to make Jesus more “real” and relevant, this approach actually makes him more abstract and distant. The goal is no longer to encounter the historical Christ in order to be united to him in mind and heart, but to use him as a pattern for our behavior after first adjusting his identity and teaching to fit popular agendas. The result is that semper purificanda and metanoia are replaced by social engineering slogans which declare that we “always need to evolve” and must “change with the times.” In effect, this approach enslaves people to cultural trends, deprives them of the freedom and abundant life Jesus came to give them, and leaves them unable to understand or embrace the beauty and attendant sufferings of his transforming
nuptial love. Essentially, syncretism is an anti-Gospel that falsely promises personal fulfillment without conversion, purification, and the Cross.

On a practical level, the irony of syncretism is that it removes the very truths about Christ and his Gospel which are most relevant and needed in order to provide a solid foundation for whatever is correct and insightful in the broader culture and to confront its errors and injustices. The root problem is that by severing creation’s and humanity’s
relation to God, secularism separates them from their origin, meaning, and goal, thereby depriving culture of an orientation worthy of human life. Autonomous
individualism attempts to fill that void with its claim that the meaning and goal of life are matters of free choice. Since every individual makes different choices, the effort to
assert one’s own identity and meaning often conflicts with others, and the ensuing disagreements are then interpreted as a power struggle, a lack of affirmation, or even
as hatred. Eventually, culture and its institutions come to be seen primarily as the means for a group of privileged individuals to impose a self-serving “narrative” of
meaning on everyone else or, on the contrary, as the potential means by which the underprivileged can wrest control of the narrative from the elites in order to “empower” themselves. Christians raised in such an environment, and having lost an awareness of their nuptial union and purification in Jesus, are predisposed to accommodate the Gospel to the culture in ways that support their own autonomous
choices. Those choices compromise their role of being salt and light as they increasingly conform themselves to the world rather than to Christ.

Fr. Timothy V. Vaverek is a priest of the Diocese of Austin serving as pastor for Assumption Parish in the city of West. His hometown is San Marcos, where he graduated with a degree in physics from Texas State University. During seminary, he studied at the University of Dallas and the Gregorian University (Rome). He received a doctorate from the Angelicum University (Rome) in 1996. His studies focused on Ecclesiology, Apostolic Ministry, Newman, and Ecumenism. Since ordination in 1985, his ministry has been in parishes except for three years as a diocesan official. He has published in various journals and writes for TheCatholicThing.org. 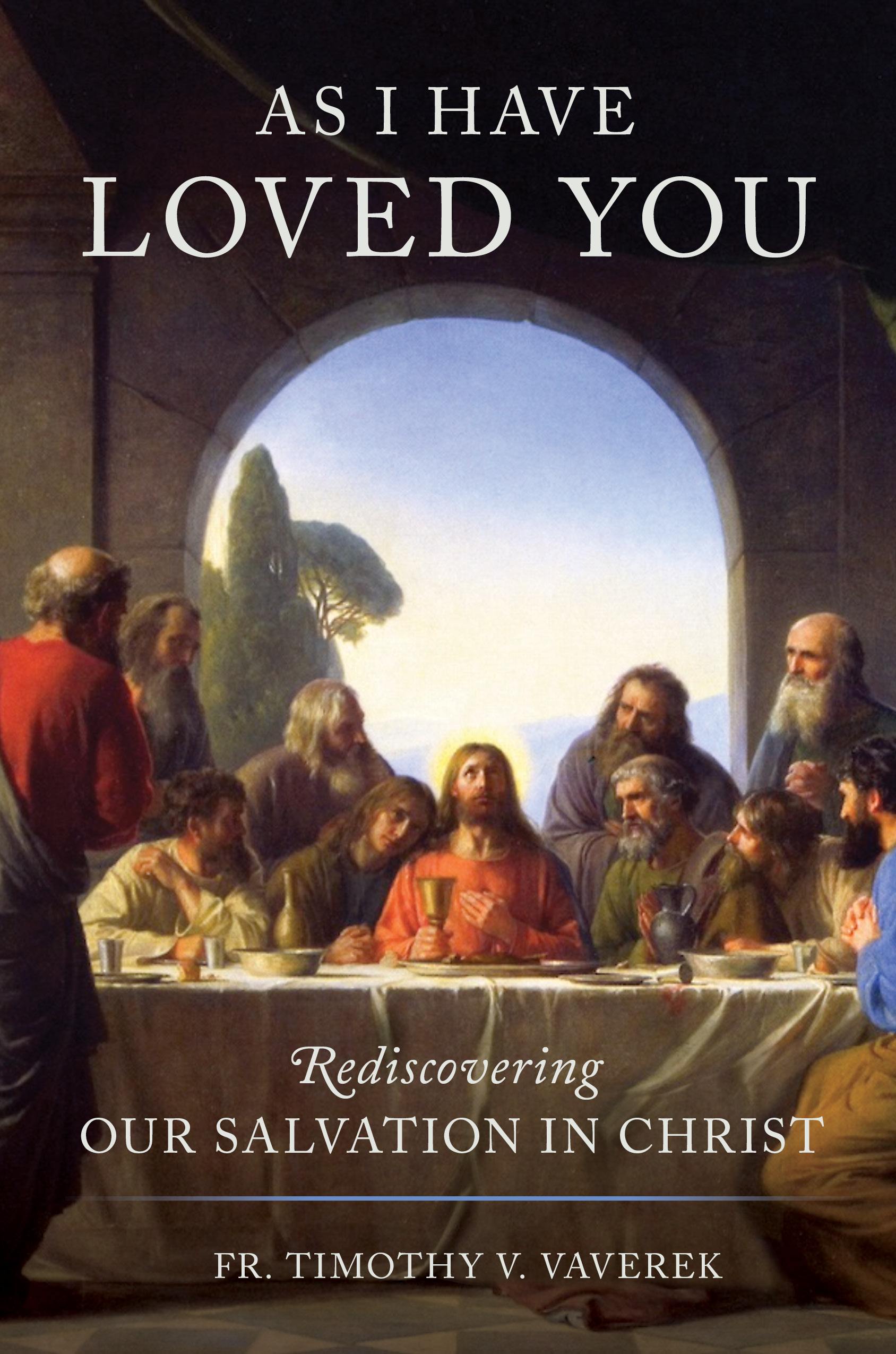 Over many centuries, Christians have lost sight of the heart of the Eternal Covenant: our nuptial union with God in Jesus as members of his Body and Bride. This has fueled a growing crisis of Christian identity and witness. Only by rediscovering the depth and beauty of our salvation in Christ will we be drawn to share more fully in his life and saving mission. But that requires encountering anew the scriptural and early Christian understanding of redemption as a nuptial bond rather than merely a juridical pardon of sin. Beginning with the Trinity’s revelation of himself and his Covenant in the person of Jesus, As I Have Loved You examines our own existence as persons and how the Covenant relationship weds us to Christ in his loving service of God and neighbor. That union prepares us for the Wedding Feast of the Lamb, when we will know and love God even as he knows and loves us.