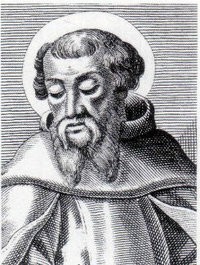 In fact, at JP Catholic we participate in the Eucharistic celebration every day.

Anyways. . . since Joel brought up the Eucharist, I thought I’d share a bit from the early church fathers.

Irenaeus on the Eucharist

This quarter I’m teaching a course on the fathers and this morning we looked at Irenaeus. Here’s what he wrote on the Eucharist in his famous Against Heresies, c. A.D. 180:

Directing His disciples to offer God the first-fruits of His own creation—not because He stood in need of them, but that they themselves might be neither unfruitful nor ungrateful—He took that created thing, bread, and gave thanks, and said, ‘This is my body’ [Matt 26:26]. And the cup likewise, which is part of that creation to which we belong, He confessed to be His blood, and taught the new oblation of the new covenant. This the Church has received from the Apostles, and offers now to God throughout all the world. . .
Then how can they say that the flesh, which is nourished with the Body of the Lord and with His Blood, goes to corruption and does not partake of life? Let them, therefore, either alter their opinion, or cease from offering the things just mentioned. But our opinion is in accordance with the Eucharist, and the Eucharist in turn establishes our opinion. For we offer to Him His own, announcing consistently the fellowship and union of the flesh and Spirit. For as the bread, which is produced from the earth, when it receives the invocation of God, is no longer common bread, but the Eucharist, consisting of two realities, earthly and heavenly, so also our bodies, when they receive the Eucharist, are no longer corruptible, having the hope of the resurrection to eternity (Against Heresies 4.18.5).
A few points to highlight:

2. Irenaeus’ argument is directed chiefly against the Gnostics, who deny the resurrection and who do not believe that the material word was created good. His point seems to be: if matter is evil, why does Jesus employ it, i.e., using the bread and the wine at the Last Supper?

4. Irenaeus argues that the body will be transformed and made incorruptible by appealing to the belief that the bread is also transformed in some way in the Eucharistic celebration: “For as the bread, which is produced from the earth, when it receives the invocation of God, is no longer common bread . . . ” In fact, he states the bread is changed in such a way that it now has both a heavenly and earthly reality.  Of course, the later definition of “transubstantiation” states something similar: the Eucharist has an earthly dimension (i.e., it looks like bread, tastes like bread, smells like bread, etc.) and a heavenly one (it is transformed into the Body of Jesus).

The Eucharist in Ignatius’ Letter to the Smyrnaeans 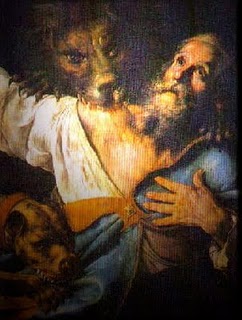 Of course, Irenaeus’ insistence on the importance of Eucharistic doctrine was not unprecedented. Ignatius of Antioch, whose death is usually placed around A.D. 117, also turns his attention to the Eucharist when he contrasts the teaching of the orthodox church with that of the heretics:

“Certain people ignorantly deny [Jesus], or rather have been denied by him, for they are advocated of death rather than of the truth. . . Now note well those who hold heretical opinions about the grace of Jesus Christ that came to us; note how contrary they are to the mind of God. They have no concern for love, none for the widow, none for the orphan, none for the oppressed, none for the prisoner or the one released, none for the hungry or thirsty. They abstain from Eucharist and prayer because they refuse to acknowledge the Eucharist is the flesh of our savior Jesus Christ, which suffered for our sins and which the Father by his goodness raised up” (Letter to the Smyrnaeans, 5:1, 6:2; taken from Michael Holmes, The Apostolic Fathers: Greek Texts and English Translations [3d. ed.; Grand Rapids: Baker Academic, 2007], 254-255).
Note the following:

1. Ignatius, like Irenaeus, seems to suggest that the Eucharist plays a formative and central role in theology. To be wrong on the Eucharist is not to simply go astray on a minor technical theological point.

2. The heretics abstain from the Eucharist because they deny what the Christians affirm: that it is the “flesh of our savior Jesus Christ”—that very flesh “which suffered for our sins and which the Father by his goodness raised up.” Ignatius doesn’t give us much more about what his opponents believe, but it seems clear that he is contrasting a “realist” Eucharistic theology with a vision that denies that the Eucharist is indeed the flesh of Jesus.

Anyways, I’ll just leave you with that “food for thought”.  Peace!