The False Promises of Entertainment

Dr. Michael Naughton is the director of the Center for Catholic Studies at the University of St. Thomas (Minnesota).  He holds the Koch Chair in Catholic Studies and is a full professor in the department of Catholic Studies. Dr. Naughton also serves as board chair for Reell Precision Manufacturing. He helped coordinate and write the Vocation of the Business Leader issued by the Dicastery for Promoting Integral Human Development, which has been translated in over fifteen languages. He is the author, co-author, and co-editor of ten books and over fifty articles, including Getting Work Right: Labor and Leisure in a Fragmented World.

So deeply ingrained in our current culture is the obsession with entertainment that we have begun to think that it is natural to human life. We have begun to think that things have always been this way, but the amount of time and energy that we spend on entertainment is in fact unique to modern societies. We love to be amused. Increasingly, we view our non-work time in terms of entertainment. The consequences of this mindset are evident among average salaries. Many of the highest paid people in our culture are entertainers. There are, of course, lots of starving actors, musicians, and athletes, but the American entertainment industry is a huge part of the economy and one of our largest exporters.

There are many reasons for the modern obsession with entertainment, but one important dynamic seems to be our need for escape and distraction. In his song “The Piano Man,” Billy Joel captures this: “Cause he knows that it’s me they’ve been coming to see to forget about life for a while.” Leisure, for much of history, was time set aside for remembering the most important things, for rediscovering ourselves and thinking about who we ought to be. But modernly, as Jacques Ellul wrote, leisure has become “the moment when amusements succeed to the maximum in making [us] . . . forget.” Rather than discovering and penetrating the meaning and mystery of our lives, modern leisure amuses us into escaping from our lives.

The very word “amusement” reveals a deeper level of our modern problem. The word comes from the Muses, Greek goddesses who were divine patrons of the liberal arts. The Muses were sources of refreshment and inspiration to those under their influence, stirring up the intelligence and the imagination—whatever helped humans to remember who they were and to understand the world. The word a-musement means a denial of the influence of the muses. In Greek, to put an “a” in front of the world implies a lack of whatever the word means. Thus, to be a theist is to believe in God, whereas to be an atheist is to deny God’s existence. Wiktionary defines amuse as “to stare stupidly” at something. (This is my wife’s description of me as I watch television.)

Paradoxically, when leisure is reduced to amusement it fails to give us rest; we become restless. After a bout of binging on Netflix or video games we find ourselves dis-eased, or, what has become the worst state possible, bored. Just as too much sleep makes us tired, sluggish, and apathetic, so also too much entertainment makes us anxious. How sad it is, then, that amusement forms of leisure are our default mode. As soon as we have a moment of free time we turn on the TV or go to the smartphone, thinking to find refreshment; and when we are finished, we feel anxious, bored, or vaguely guilty, knowing that we should have been doing something else.

Our advertising system has exploited this temptation to amusement. A couple of years ago I saw an ad for a hotel chain touting a weekend getaway. A couple in a swimming pool were looking at each other in a rather non-platonic fashion with the caption, “Where your body checks in and your mind checks out.” The ad captured in both an image and a phrase the modern form of leisure. It described the weekend as a time to flee reality, rather than a time to penetrate it more authentically. The inhuman harshness of the economic grind of work gives an added impetus to this form of seeking relief.

The person “comes in the profoundest sense to himself not through what he does but through what he accepts,” not through what he achieves but what he receives. When we speak of acceptance, of receptivity, of leisure and rest, we need to recognize how different it is from our work and our accomplishments. Its structure is not an “achievement” on my part, but a “receivement,” wherein I lay myself bare to accept what God wants of me.

This receptivity creates a contemplative outlook that does “not presume to take possession of reality but instead accepts it as a gift, discovering in all things the reflection of the Creator and seeing in every person his living image.” It is a receptivity that is ever new, unpredictable, and never settled, and it has the capacity to surprise us, to produce wonder along with the fear that we might need to change our ways of thought and action. 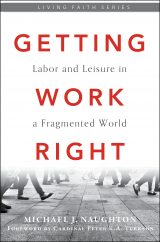 The divided life is a temptation so built into our society, we may not even recognize it. Yet most of us fall prey to it. We either undervalue work, resenting it as simply a job, or we overvalue it as an identity-defining career. Michael Naughton, drawing on his background in both business and theology, proposes that the key to finding balance is another important human activity: leisure. In light of leisure—not mere amusement, but time for family, silence, prayer, and above all, worship—work becomes a space where men and women can find deep fulfillment. Naughton provides real-world examples of how businesses can promote authentic human flourishing and innovation through practices and policies that support leisure.

In Getting Work Right Michael Naughton will change how you work—and rest.