The Psalms: Music for Our Hearts

Mike Aquilina is the best-selling author of more than forty books on Catholic history, doctrine, and devotion, including A Joyful Noise: Praying the Psalms with the Early Church.

You can still hear it, can’t you? The irritating car dealer commercial, the endless loop of background music in the computer game, the dopey dialogue from that stupid movie that you never would have watched if anything half-decent had been on.

And every fleeting thought sets off some song in your head—a song you can’t silence, no matter how hard you try, especially if it’s a song you hate.

It would be nice if we could set aside some time for meditation and prayer. But who can meditate with all that racket going on?

But if we take our own racket with us even into our quiet spots, what can we do? How can we escape? How can we devote our minds to spiritual things instead of the world’s constant parade of temptations and trivia?

Maybe we can’t escape the racket. But there’s no reason we can’t change it. We might even make our constant mental soundtrack work for us instead of against us, pushing us toward spiritual things instead of dragging us away.

This is exactly the advice the early Christians got from the best thinkers of the age. After all, their world was not so different from ours. Wherever Christians went, they heard music—then as much as now. It stuck in their heads and invaded their thoughts, just the way it does to us.

So much does our nature take pleasure in chants and songs that even babies at the breast, when they are weeping and troubled, are lulled to sleep. For the same reason, travelers sing at mid-day as they drive their yoked animals, and thus they ease by song the hardships of the journey. And not only travelers, but laborers, too, often sing as they tread the grapes in the winepress, gather the harvest, dress the vines, and do their other jobs. Sailors do the same, rowing the oars. And women sing a certain melody as they weave and sort the tangled threads . . . Women, travelers, workers, and sailors, try to ease with a chant the hardship that goes with their toil, for the mind endures hardships and difficulties more readily when it hears songs and chants.  —Exposition of Psalm 41

Music is the natural accompaniment to our lives, as St. John Chrysostom points out. We are human; our lives move to music and song. But what music and what song? Those are the important questions.

Everywhere they went, early Christians made the psalms their soundtrack. They learned to love these sacred songs in the same way teenagers today love their favorite bands.

Not long ago, archaeologists in Egypt found the mummified body of a fifth-century Christian boy buried with his greatest treasures in his hands: a Coptic cross and a Book of Psalms.

Today, Christians everywhere love the Cross. But how many of us know and love the psalms as well as that ancient Egyptian boy?

The Book of Psalms has been the prayer book and the hymnal of God’s people for three thousand years. Israel sang the psalms of David in the Temple built by the son of David.

When the Messiah came, however, the Church sang the Psalter as a “new song to the Lord” (see, among others, Psalm 96:1). In every psalm they saw a startlingly clear expression of the love they felt for Christ—the love that burned so bright that they were willing to die for it if that was what Christ called them to do.

In the years and the centuries after Pentecost, Christians came to see the psalms as the preeminent prayers of the New Covenant. And the saints of the Early Church came to see Christ at the center of the psalms.

The psalms were the prayers of Christ.

They were prayers to Christ.

And they were prayers about Christ.

So the psalms rang out in the worship of the Early Church. They’re everywhere in the ancient rituals. Even today, the Book of Psalms is the one book of the Bible that is read at just about every Mass.

But the psalms were more than just set pieces in the liturgy. In the preaching of the holy Fathers—Chrysostom, Augustine, and Basil—the psalms were the very voice of Christ, raised through the ages in his body, the Church.

The monks of the Egyptian desert prayed all the psalms every single day. (Monks everywhere still do.) In the lives of early Christian women, the psalms were sacred touchstones of everyday life. There was an appropriate psalm for every occasion.

Those early saints remain with us as a “great cloud of witnesses” (Hebrews 12:1). This book brings their words and liturgies together, so that we might raise our voices with theirs and sing the psalms again as a “new song”—and so that we might sing with one voice, the voice of Christ.

We’re also trying to start a good habit. It’s a good thing if a psalm comes spontaneously to our lips in times of joy or sorrow. But a psalm is more likely to arise if we have made a habit of praying the psalms—as the early Christians did—with regularity, in season and out of season. At Mass and at designated hours day and night, the Church prayed (and prays) specific psalms in their endless rounds, whether the members of the congregation “feel” like this or that particular psalm or not. We are sowing songs in the heart for their harvest in due season. 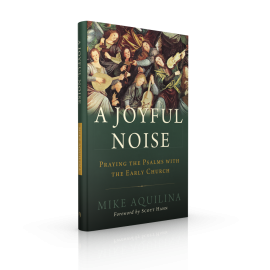 We hear often that “the word of God is living and effective” (Heb 4:12). But what does that really mean for our day-to-day lives? A Joyful Noise reveals how the Psalms, sung by everyone from King David to Jesus to the Early Church Fathers to your church choir, are deeply rich and meaningful for our lives today.