The Story Behind “The Attic Saint”

This article was originally published on The Central Minnesota Catholic, written by Kristi Anderson.

In 1999, Tim Drake was working in the communications department of Catholic Charities, whose offices were in an old building called the Zardetti House, located on the campus of Cathedral High School in St. Cloud. One day, something led Tim to the attic. There, among other treasures, he found a painted portrait of Pope Leo XIII, who officially created the Diocese of St. Cloud in 1889.

Concerned about the extreme heat and cold of the attic, Tim wrote to the diocese, asking what should be done with the painting. He was told he could have it. He took the painting home and put it in a spare room, and a story inspired by the painting began to form in his mind.

Eventually, he began to tell the fictitious tale to his young son Elias, , who was perhaps 6 or 7 at the time, even drawing stick figures to accompany the words.

“Dad, when will this be a real book?” Tim recalls Elias asking him.

And that time is now. In conjunction with Emmaus Road Publishing and illustrator Theodore Schluenderfritz, Tim is excited to announce that the 48-page children’s read-aloud book, “The Attic Saint,” is now a reality.

The story tells the tale of a young boy named Leo — a nod to the painting of Pope Leo XIII as well as to a family friend of the Drakes also named Leo. The boy moves to a new city and a new house, which is actually a former convent. As the boy begins to explore all the features of the new “old” home, he uncovers what Tim says is a “thin veil between heaven and earth.”

Without giving too much away, St. Ambrose, whose feast day is Dec. 7, makes an appearance to the little boy, forming a friendship that Tim said “transcends time and space.”

“In the story, a stained-glass dove moves across the floor of the library, leading Leo to investigate the attic. That idea was inspired by watching Michael Lauer’s stained glass dove at St. Anthony’s move across the wall of the sanctuary,” Tim said.

Interestingly, Tim and Theodore met at St. Anthony’s when their children were little.

“Ted and I first met at St. Anthony’s because we both had very young children and were standing in the rear of church together, either because of noise the children were making or because we had to change diapers on them,” Tim said.

Theodore, who now lives in Littleton, Colorado, with his wife and children, is an accomplished illustrator whose work is featured in the “Old and New” Series by Maura Roan McKeegan, “A Life of Our Lord for Children,” and “The Book of Angels.” He is a freelance graphic designer and the art director for Catholic Digest and Gilbert Magazine.

He was excited that the book was finally coming to fruition, after hearing Tim talk about it for so many years.

“I thought it was a great idea. And when Tim sent the text, Leo really came alive for me,” Theodore said. “Leo has been a part of my life for a long time. It’s a joy to collaborate with Tim [and] it’s wonderful to see the book completed after all of these years.”

Theodore said Leo’s house was inspired by houses in Scranton, Pennsylvania, where he lived for 10 years.

“I love old architecture from many different periods. I’m also inspired by medieval illumination and Eastern iconography,” he said.

He also drew creativity from his own neighborhood.

“A little boy who lived down the block from us posed as Leo for me. Without his help I don’t think the book would have gotten done. So, thank you to Joel!” he said.

Tim, who now serves as executive director of Pacem in Terris Hermitage Retreat Center near Isanti, has written several other books including “Behind Bella,” which provided a behind-the-scenes look at the 2006 feature film, as well as children’s coloring books. He lives in St. Joseph with his wife and children.

After only a year or so with the painting at home, Tim knew it didn’t belong there.

“I decided to give the painting new life,” he recalled. “I took it to the Stearns History Museum in St. Cloud. You should have seen their eyes when I walked into the museum carrying the painting. It was as if I had carried in the Hope Diamond.”

The painting had a tear in it, which the museum repaired. But that wasn’t the only thing that was noticeable. In the right-hand corner, a raised image of Mary can be seen. It appears that the image of the pope was painted over what looks like an image of Our Lady of Lourdes. With a careful eye, one can see what presumably is Mary, holding a rosary. In the bottom left corner is an image of what looks like a small girl kneeling down — possibly Bernadette Soubirous.

Upon further research, Tim learned the artist was Peter Martini, who painted churches throughout Europe and emigrated to the United States from Germany in 1881. According to Tim, Martini was commissioned by Bishop Otto Zardetti to paint the town’s patron, St. Cloud. That picture currently takes up residence in the chancery.

Tim also found out that the museum has three more of Martini’s paintings — a landscape painting, another in which Mary, weeping, holds the crown of thorns upon her lap and another of Mary with John the Baptist and the Christ-child playing at her feet.

Revisiting the painting recently, Tim was again struck by its uniqueness. He hopes that his book will stir the hearts and minds of those who read it just as the portrait continues to rouse his senses.

“I hope people enjoy the story. It’s meant to be a book that a parent would read to a child aloud. I think it could introduce families to Christ, to the faith, to iconography, to the communion of saints. There is so much richness in our Catholic faith, and that’s really what I was trying to bring out. For me, it is about how we make room in our lives for the saints. As Catholics, we believe they are alive in heaven with Christ. That is why we ask them to pray with us. They are our friends.” 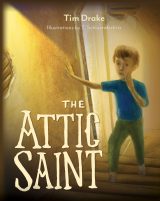 In The Attic Saint, a heartening tale for children of all ages, the wisdom and beauty of the Catholic faith shine brilliantly. Author Tim Drake’s inspired story is brought to life through Theodore Schluenderfritz’s vivid illustrations.