Ralph Martin is the president of Renewal Ministries and Director of Graduate Theology Programs in Evangelization and a professor of theology at Sacred Heart Major Seminary in the Archdiocese of Detroit. He holds a doctorate in theology from the Angelicum University in Rome. Pope Benedict XVI appointed Martin as a Consultor to the Pontifical Council for the New Evangelization. He was also appointed as a peritus for the Synod on the New Evangelization which was held in Rome in 2012. Martin is the author of A Church in Crisis.

A significant element of the Enlightenment—that upheaval of learning and change which profoundly shaped the modern world—was an explicit rejection of God, the Church, and revelation. What Voltaire, a leading figure of the Enlightenment, said about the Church, Ecrasez l’infame!, probably comes close to reflecting the sentiments of Satan on the subject: “Crush the accursed thing!”

This overt hostility toward Christianity and the Church man infested itself unmistakably in the French Revolution, a revolution that became something of a prototype for the political upheavals that have characterized the modern world. Along with its hostility to Christianity, the French Revolution ushered in an idolatrous worship of “reason,” a conscious and deliberate exaltation of man above God, an affirmation of absolute human autonomy. Yet this esteem for reason and autonomy was coupled with irrationality and produced something like an anti-religious religion. A “feast in honor of reason,” held on November 10, 1793, in Notre Dame Cathedral in Paris, graphically illustrates the point:

On the top of a scaffolding, placed in front of the choir, was erected a temple dedicated to philosophy, and to crown all was installed, in place of “inanimate images,” an actress from the Opera, chosen for her beauty, as a “masterpiece of nature,” but entitled, without very evident cause, the “Goddess of Reason.”

This “abomination of desolations” in a holy place focuses and symbolizes that murderous hostility toward God that constitutes the center of Satan’s activity and works. His hostility is directed toward man’s own destruction.

The shocking destruction of Notre Dame by fire in 2019 has been interpreted by many as both a judgment and wake-up call to the Church and the nations. While participating in a conference in France shortly after the burning of Notre Dame, a French Dominican priest pointed out that at the very top of the steeple of Notre Dame was not a cross but a rooster, proud symbol of France and the French state. It was that rooster that first fell in the conflagration. And yet as Notre Dame burned, something of the latent Catholicism in the French became manifest as thousands gathered nearby, with many praying and singing hymns in shocked awe.

If we can see some satanic purposes being achieved in the French Revolution and still embedded today in the French nation, once lauded as the “eldest daughter of the Church” and now in massive apostasy, they are much more evident in the more recent unfolding of the Marxist revolutions, even though these revolutions have protested, like the French Revolution before them, real injustices. Marxists displayed the same opposition to God and the Church, the same conscious exaltation of man in place of God. However, they imposed their hostility more ferociously and explicitly, more systematically, and for much longer spans of time. Recent research into the life of Karl Marx has found the seeds of the wider revolution in Marx’s personal life. After apparently converting to Christ while a teenager, Marx soon rejected him. Marx’s miserable personal life and relationships, and the subsequent suicides of his daughters, all witness to the victory of Satan, the enemy who lies and deceives in order to bring man to ruin, death, and damnation. In many ways, Marx’s own life became an anti-sign of the “new man” his revolution was supposed to produce.

And the “fruits” of this devilish ideology continue to shock. How many tens of millions were killed, condemned to prison and labor camps, and forced into starvation in the effort to create a society of “equality and brotherhood” in the Soviet Union? How many thousands of priests and bishops were murdered by the Soviet Union in an effort to crush and subjugate the Russian Church, which it succeeded in doing? How many Soviet women were led to believe that aborting their babies was their duty to the state and normal birth control? How many forced abortions are carried out to this day in China?

As I write this, as we have seen, the bloody journey of Chinese communism continues to unfold, with more than a million Muslims consigned to “reeducation” camps intended to purge them of their faith. We have also seen relentless efforts to bring the Christian churches under the total control of the Communist Party and to prevent the transmission of the faith to the next generation. To live in China now is to live in the most highly developed surveillance state the world has ever seen. With ever-growing numbers of facial recognition cameras with advanced AI (artificial intelligence) capabilities, with ever more sophisticated monitoring of everyone’s communications, travels, and contacts, citizens are given “social credit” scores and are rewarded and punished accordingly. The Chinese government’s goal is to have six hundred million surveillance cameras operational in the next two years so that everywhere citizens go, they can be instantly recognized, tracked, and instantly looked up in a central database. If a person has a “bad social score,” that is, isn’t obedient to the government, they will be denied access to travel and won’t be able to buy a train or plane ticket. Already in the first year of deployment, three thousand wanted criminals have been discovered and arrested. In an interview with one of the systems developers, a reporter asked if this could be used for bad purposes. The developer said it is possible.

Our understanding of human history will always be inadequate unless we realize that, as Paul puts it, “we are not contending against flesh and blood, but against the principalities, against the powers” (Eph 6:12). To the solidly instructed and spiritually sensitive Christian, the role played by satanic principalities and powers in the lives of certain “great” men and “great” events is unmistakable.

Jesus identified Satan as one who is seeking to deceive and blind the human race, to direct it down paths that will lead to murder and death now, and damnation forever (see John 8:43–47). Satan accomplishes his will through human instruments, just as God does. A view of history that does not take these spiritual realities into account is of necessity partial, blind, and distorted. 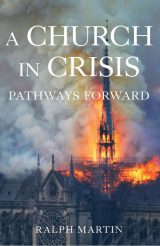 In A Church in Crisis: Pathways Forward, Martin offers a detailed look at the growing hostility to the Catholic Church and its teaching. With copious evidence, Martin uncovers the forces working to undermine the Body of Christ and offers hope to those looking for clarity.