Was There a Passover Lamb at the Last Supper? 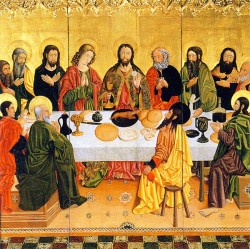 Today, Catholics everywhere will celebrate Holy Thursday by attending the Evening Mass of the Lord’s Supper. At this Mass, we will read the institution of the Passover (Exod 12, OT reading), sing one of the most famous of the Hallel Psalms (Psalm 118, Responsorial Psalm), and then read the institution of the Eucharist (1 Cor 11, Epistle) and Jesus’ act of washing the disciples’ feet at the Last Supper (John 13, Gospel).  This particular Eucharist is a momentous liturgical moment, where we both recall the institution of the very first Eucharist and enter into the beginning of the calendrical Holy of Holies—the sacred Triduum, climaxing in the feast of Easter (in Latin, Pascha).

Was the Last Supper a Passover Meal?

But how did Jesus and his disciples celebrate the first Holy Thursday? Specifically, was the Last Supper a Jewish Passover meal?

As anyone who has read Pope Benedict’s new book, Jesus of Nazareth: Holy Week will know, the Pope devotes a substantial portion of his chapter on the Last Supper to the question of the date of the meal—specifically, whether or not the Last Supper coincided with the ordinary Jewish Passover meal (see pp. 106-115). And as anyone familiar with this extremely complex and age-old question knows, there is simply no way I can address it here adequately.

Thankfully, I am currently working on finishing a full-length scholarly book on the Last Supper (to be published by Eerdmans), in which I will offer a detailed solution to the date of the Last Supper. In that study, I will draw on the massive amount of contemporary research done in this area and add to it some important Jewish evidence that been neglected. (For some suggested readings on the question of the date, see pp. 214-215 in my book, Jesus and the Jewish Roots of the Eucharist).

For now, all I would like to do in this post is one brief point about the first Holy Thursday: contrary to what is often claimed by some exegetes, the Synoptic Gospels clearly identify the Last Supper as a Jewish Passover meal—one that included the presence of a passover lamb. Allow me to explain.

Anyone familiar with scholarly books on Jesus will be aware that one of the primary arguments against the Last Supper being a Passover meal is that “there is not a word about the lamb” in the Gospel accounts of the institution of the eucharist. In fact, for years, I myself agreed with this view and even have some recordings where I make just that point!

Alas, upon closer study of the entire context in the Gospels in their original Greek, I discovered that the idea that there was no lamb at the Last Supper is just not exegetically sustainable. Although the word “lamb” (Gk arnion) admittedly does not appear in any account of the words of institution, both Mark and Luke in particular explicitly testify that there was a Passover lamb (Gk pascha) at the Last Supper.

This is quite clear in the Gospel accounts—not first and foremost in the the words of institution—but in the accounts of Jesus sending the disciples (Peter and John) into Jerusalem to prepare the Passover (Mark 14:12-16 parr.)

“When they Sacrificed the Passover Lamb (Pascha)”

So, for example, in the Gospel of Mark, we read:

“And on the first day of Unleavened Bread, when they sacrificed the pascha, his disciples said to him, “Where will you have us go and prepare for you to eat the pascha”? And he sent two of his disciples, and said to them, “Go into the city, and a man carrying a jar of water will meet you…” (Mark 14:12-13)

“Go and Prepare the Pascha, that We May Eat it”

The presence of the Passover lamb at the Last Supper is even more explicit in the Gospel of Luke. According to his account of Holy Thursday afternoon, the following took place:

“Then came the day of Unleavened Bread, on which the pascha had to be sacrificed. So Jesus sent Peter and John, saying, “Go and prepare the pascha for us, that we may eat it.” They said to him, “Where will you have us prepare it?” (Luke 22:7-8)

Same problem: there is no way I can see in which the first use of pascha in v. 7 refers to the Passover lamb, while in v. 8 pascha refers to a lamb-less Passover meal (if such a thing were even possible in the 1st century A.D.). The meal which they are preparing for Jesus and the disciples to eat in the upper room that evening clearly consists of the passover lamb which had been sacrificed that day.

“I Have Greatly Desired to Eat this Pascha with You”

To top it all off, in Luke’s account, Jesus even uses the same word in the context of the words of institution on two more occasions. Just a couple of verses later, we read:

The Teacher says to you, Where is the guest room, where I am to eat the pascha with my disciples?’ And he will show you a large upper room furnished; there make ready.” And they went, and found it as he had told them; and they prepared the pascha…. And when the hour came, he sat at table, and said to them, “I have earnestly desired to eat this pascha with you before I suffer… (Luke 22:11-13, 15)

Now, you can of course always fall back on the claim that all this testimony is historically inauthentic, the creative imagination of the Evangelists and the early church. And of course what I have said in this brief post in no way deals with the question of how to reconcile the Synoptic description of the presence of the Passover lamb with the apparent chronological contradiction with the date of the Last Supper in the Gospel of John. (In order to get my answer to that sticky problem, you will have to read the longer Eerdmans book on the Last Supper).

But all that is a completely different issue from whether or not the canonical Gospels ever claim there was a Passover lamb at the Last Supper. And the fact is Mark and Luke are crystal clear on the matter. Again, the only way I can see to maintain that there is “no mention” of a lamb at the Last Supper is to (a) only read the Gospels in translation; (b) isolate the words of institution from their surrounding context; (c) completely ignore the accounts of the preparation on Thursday afternoon; and/or (d) reject these accounts as unhistorical. Some combination of these is, of course, exactly what many treatments of the Last Supper that claim there was no lamb present do.

So, in closing, perhaps there is some wisdom in the selection of readings that the Liturgy of the Church will lay before us tonight. When you are listening to the accounts of the Passover in Exodus, singing the Passover psalm during the Responsorial, and hearing Paul’s account of the words of institution, do not forget to recall how the Gospels say Jesus himself prepared for that momentous night, by sending Peter and John into Jerusalem to “prepare the pascha.” May our desire to partake of the new Passover grow to be more like his own, as we journey toward the great feast of the eternal Pascha, the feast of Easter.

P.S.: Note that the Master of Perea’s icon of the Last Supper [featured above] includes the presence of the Passover lamb. That’s one reason I used it on the cover of my book. It’s also just a rockin’ icon.