What Are the Precepts of the Church?

The law of the Church is called Canon Law. It governs how the Church operates and the obligations and duties of its members. The Church’s law provides the rules and norms that help the faithful to live a moral life and guide them toward holiness.

The precepts and other laws of the Church are distinct from both the moral law and matters of faith that the magisterium proclaims. For this reason, they have a different kind of authority. When the pope and bishops teach on matters of faith and morals, they transmit the Deposit of Faith, given to us by God. This teaching can develop over time as the Church grows in understanding, and it can be explained in new language so that it can be better understood by people in different times and cultures, but the Church can’t change the teaching because it doesn’t come from the pope or the bishops or their own authority. It comes from God himself. The job of the pope and the bishops is simply to faithfully transmit and interpret the Deposit of the Faith.

The laws of the Church are different. They reflect the moral law and the Church’s self-understanding, which are part of the unchanging Deposit of Faith, but they also apply that teaching to particular circumstances with rules and disciplines that can be changed. The pope and bishops may command a particular practice because they believe it will be helpful to the pursuit of holiness, but then, in a later era, change or adjust the rule because new circumstances make it no longer helpful.

An example of this is the Church’s laws regarding fasting and abstinence on Fridays. For many years, the Church required that all Catholics abstain from meat every Friday of the year as an act of penance, in solidarity with Jesus. But in the modern period, the Church decided that this universal law was no longer achieving this goal. So, after 1965, the Church has given Catholics a choice. She still calls us to take on some voluntary penance every Friday and recommends that it be abstaining from meat. But, she also allows us to choose some alternate penance instead, such as abstaining from sweets or praying an extra Rosary.

This difference between disciplines, which can be changed, and the moral law, which does not change, sometimes causes confusion. For instance, some people think that if the Church can change its rules about abstaining from meat on Fridays, then it can also change its teaching about abortion. But this is based on a fundamental mistake. The Church’s rules about fasting aren’t unchanging moral laws that come from God. They are rules that the Church makes in particular times and places to guide the faithful. In contrast, the wrongness of abortion isn’t a “rule” that comes from the Church, but is a part of the moral law, which comes from God. The Church does not make up this moral law but discovers it by reflection on creation and divine Revelation and faithfully transmits it through her teaching. As a consequence, while popes and bishops can change rules about things like fasting, they have no authority to change the moral law. 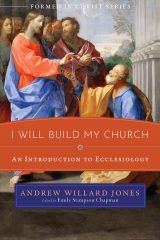 The Formed in Christ series is a solid and faithful resource that provides a thorough treatment of the Catholic faith and the various branches of theology. I Will Build My Church: An Introduction to Ecclesiology covers a broad range of topics, from Church history, to her hierarchy and liturgy, to her mission in the world.