What Does It Mean to Know Someone?

By Luke Burgis and Joshua Miller

Luke Burgis is Entrepreneur-in-Residence at the Ciocca Center for Principled Entrepreneurship at The Catholic University of America. Joshua Miller, PhD, is the co-founder of Inscape. He also helped build The Center for Leadership at Franciscan University of Steubenville where he currently serves as personal vocation mentor and mentor trainer for faculty and staff. Together, they wrote Unrepeatable: Cultivating the Unique Calling of Every Person.

Human beings always faced the challenge of getting to know one another deeply. Today the difficulty seems especially great. We’re busy. We’re transient. Wanderlust or the need to move interrupts relationships. Distractions abound. Advances in computer technology enable frequent opportunities to “connect” but often screen out the body language and tone of voice which some experts say account for 50 to 80 percent of real communication. We hunger for deep relationships, but often try to build them on an anemic diet of texts and emails versus the richness of true face-to-face interaction.

Even parents who live with their children for eighteen years before they leave the nest can have difficulty getting to know them. In the frenetic busyness of meeting their children’s myriad needs, parents sometimes fail to inquire and listen with empathy, and thus truly see the authentic nature of their kids. It’s hard getting to know others. If we want to help them become who they were created to be, though, it is imperative that we do so. Our Triune God is relational. We image Him. We are called by virtue of that fundamental reality to be relational, to know others and be known by them.

What do people mean when they talk about knowing the other?

Sometimes they mean mere acquaintance. Where I live in Ohio, perfect strangers will often say, “Good to know you,” when introduced to one another. Familiarity through social connections can make the encounter more meaningful. “Yeah, I know Deanna. She was my brother’s girlfriend back in high school.” Obviously there are various ways of knowing another person. We are not going to explore the meaning of knowing in depth—thousands of books have been written on epistemology, the study of knowledge. For our purposes, knowing another person means developing a relationship with that person and perceiving the truth or nature of that person to some degree.

But what is it about a person that is most true of them?

First, relationships. A person’s relationships—especially those that are most foundational and enduring—constitute an important part of the person. We find ourselves within a rich web of relationships. One person is at the same time a daughter of God, a child of Edith and William, the wife of Arthur, the mother of Jacob, a friend of Carrie, and so on. We each have our own concrete individuality, but relationships literally define who we are.

Second, essential characteristics. We describe people according to general traits that they share with all other people (embodied rationality) or with many (extroversion or introversion), but these characteristics don’t reveal the unrepeatable nature of the person, which can’t be captured with language. “Peaceful” and “calming” are accurate descriptions of my wife’s voice as she sings Gregorian Chant, but I can use those words to describe how others sing. Her way of singing, and of being in general, is her own. As much as possible, we need to encounter others and see them according to their unrepeatable selves.

In common speech we often ask, “What is your story?” There’s a lot of wisdom embedded in that question. A person’s relationships and essential characteristics come alive in his story. Stories allow us to see one’s intrinsic energy to be a certain way in a social, cultural, historical, and familial context. We see others acting upon him, and his self-creative freedom in responding to those actions. His story connects this dynamic exchange in a holistic way.

We reveal ourselves to others when we share our stories with them, especially when we reveal the most meaningful actions of our lives. Telling the journey of dating and then marrying our spouses lets others into our world more so than tales of first encounters with a musician or a new recipe for Cajun gumbo. At the same time, the very process of formulating meaningful stories is important because it enables us to become more deeply aware of who we are. 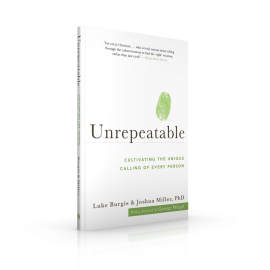 Unrepeatable is about the urgent need for each of us to cultivate the vocations of others and the steps we should take to do it well. By smartly weaving evocative stories of those who have radically lived out their callings with practical tools for discernment and mentorship, Luke Burgis and Joshua Miller—who have a combined twenty-five years of experience helping people and organizations discover their purpose—turn staid perceptions of vocation on their head.