Where Did We Get the Bible?

The Bible is by far the most popular book in history. Bibles are everywhere. There are millions of copies in nearly every language, and the Bible is posted on thousands of websites. Because of the availability of the Scriptures, it’s tempting to take their existence for granted. But it hasn’t always been this way. It actually took centuries for the Bible as we know it to come together.

First came the books of the Old Testament. They were written by the Jewish people during the thousands of years before the birth of Christ (c. 6 BC–AD 1). Then came the New Testament books. They were written over the course of the first century after the death of Christ (c. AD 30–32). In addition to those books, there were other books written about God by Jews and Christians during those same time periods, and they too seemed like they might be inspired. But were they?

That question—which books were the inspired Word of God and which books were just the writings of men—became a pressing controversy for the early Christians. They needed to know which books were inspired by God and worthy of being read in the Christian liturgy (the Mass). The search for the answer ultimately led to the formation of the biblical canon, or list of inspired books. After several hundred years and a great deal of discussion, the Church essentially settled which books belonged in the Bible and which books did not. Then, over a thousand years later, the Church defined that canon dogmatically, meaning that to deny that list was to deny the fullness of the faith.

The history of how the Bible came together can seem complicated, but it helps to remember that, as important as the Scriptures are, they are just one part of the Revelation of God; not its entirety. Jesus himself is the fullness of God’s Revelation, and divine Revelation is transmitted through both Scripture and Sacred Tradition. To better understand how Scripture came to be, therefore, we need to begin by situating it within history and Tradition.

The most effective way to communicate a message is not to write a book; it’s to go and speak with someone face-to-face. This is true now, and it was especially true in ancient times, before the printing press and widespread literacy. Just think of how often something we say in a text message or on social media is misconstrued. It’s much easier to understand someone when we talk with them in person. This is why Jesus commanded his Apostles, “Go therefore and make disciples of all nations, baptizing them in the name of the Father and of the Son and of the Holy Spirit, teaching them to observe all that I have commanded you” (Matt 28:19–20). Note: Jesus tells them to “go,” teach, and baptize, not to “stop and write.” Jesus himself shared the Gospel this way (Acts 1:1), and he called the Apostles to follow his example.

The Apostles were equipped to do this because of the time they had spent with Jesus, listening to his teachings and observing the witness of his life. Then, after his death and Resurrection, the Holy Spirit descended upon the Apostles at Pentecost and granted them an even fuller understanding of Jesus and his mission. When the Apostles went out, first into Jerusalem and then across the known world, they preached this knowledge, understanding, and way of life. We call this preaching phase in the spreading of the Gospel “Oral Tradition” (CCC 126).

Eventually, some of the Apostles and their closest followers wrote down some of this tradition. Their writings became the New Testament. This apostolic preaching, both the books and the unwritten Oral Tradition, was added to the written books and the oral tradition of the Jews. Through this process, the Church received both her Tradition and her Scripture.

The Catholic Church accepts as inspired forty-six books in the Old Testament and twenty-seven books in the New Testament (CCC 120). Together, these seventy-three books form the canon of Scripture. But how do we know that these books are the inspired books and not others? Could the Church have missed one? Protestants have only 66 books in their canon—why? In short, why is our Bible the way it is, and how did it get to be that way?

To answer that question, the first thing we need to recognize is that the very idea of a scriptural canon took several centuries to develop. It is probably a mistake to talk about a “canon” before the late fifth century (400–500). This is not to say that there was no Scripture before the canon—there certainly was! Jesus himself quotes the Old Testament. Rather, it wasn’t clear that some sort of definite list of inspired works ought to be put together. It was not clear that there were important distinctions between “important” or “sacred” books and “inspired” books, nor what those distinctions would be. The Jews themselves did not have a definite list of canonical books for the Old Testament. Rather, there were several traditions, each of which considered a different set of books to be sacred.

Furthermore, it wasn’t at first clear that Christians would make additions to the sacred writings. Initially, the Church learned about Jesus only through the preaching of the Apostles, and Jesus didn’t order the Apostles to write anything down. The first community of Christians wasn’t thinking about writing about Jesus; they were still processing what they were hearing from the Apostles. In time, God inspired some men to write letters and Gospels that preserved much of the Oral Tradition for future generations. He also helped others to recognize the necessity of including these writings in Sacred Scripture.

Christianity is a religion that considers history integral to salvation. The unfolding of our understanding of Scripture over time is a part of this salvation history. Far from calling into question the validity of Scripture, the recognition that it came together over centuries verifies that God works out our salvation through our history and not in opposition to it. God didn’t make the Bible appear in a puff of smoke and then order us to follow its teachings. Rather, he helped the Bible to grow and develop as the people of God grew and developed. 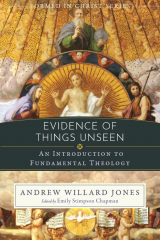 The Formed in Christ series is a solid and faithful resource that provides a thorough treatment of the Catholic faith and the various branches of theology. Evidence of Things Unseen: An Introduction to Fundamental Theology explores God’s revelation to mankind and how the content of this revelation is transmitted to us in Scripture and Tradition. This introduction to fundamental theology answers the question: how do we know who God is?