Fr. Carter Griffin is a priest of the Archdiocese of Washington. A graduate of Princeton University and a former line officer in the United States Navy, he obtained his doctorate in theology from the Pontifical University of the Holy Cross in Rome. After serving at St. Peter’s parish on Capitol Hill, in 2011 he was assigned to the newly-established St. John Paul II Seminary in Washington, D.C., where he now serves as rector. He is the author of Why Celibacy?: Reclaiming the Fatherhood of the Priest and Cross-Examined: Catholic Responses to the World's Questions.

Why study apologetics at all? There are at least three principal reasons.

First, because we believe that the Catholic faith is true, and everyone has a right to hear the truth. In his or her baptism every Catholic receives a personal, apostolic commission from the Lord to help others embrace that truth. As St. Paul wrote, “Necessity is laid upon me. Woe to me if I do not preach the Gospel!” (1 Cor 9:16). For St. Paul, and for us, this is not a mere obligation. The more convinced we are by the truth, beauty, and goodness of the Gospel—the full Gospel proclaimed in the Catholic Church—the more earnestly we desire others to receive it. The study of apologetics can help us to articulate the faith in such a way that others, whether non-Catholics or fallen-away Catholics, are more likely to grasp it, appreciate its truth and splendor, and ultimately embrace it.

Reasoned thought about Catholic doctrine does not remove all difficulties. Many teachings, after all, we know only from revelation and cannot be apprehended through reason alone. Even in these cases, however, apologetics can demonstrate that the teaching is never against reason or irrational, even when it is “above” reason, or super-rational. We can show that embracing the faith will never require anyone to do violence to his or her reason. On the contrary, a candid acknowledgement of perceived difficulties and opposing arguments shows a confidence in the truth of Catholic teaching and a willingness to engage any and all well-disposed interlocutors.

Second, we study apologetics because there are many prejudices and misunderstandings about the Catholic faith which impede others from accepting it. As Venerable Fulton Sheen once wrote, “There are not over a hundred people in the United States who hate the Catholic Church. There are millions, however, who hate what they wrongly believe to be the Catholic Church . . . . As a matter of fact, if we Catholics believed all of the untruths and lies which were said against the Church, we probably would hate the Church a thousand times more than they do.”

One person believes that the Church discriminates unjustly against women by forbidding their priestly ordination. Another that the Church requires the elderly and sick to be kept alive for as long as possible with every medical procedure available, regardless of pain or expense. Another that each word that a pope utters or writes is to be accepted as infallible by Catholics. These are simply mistakes, but very common ones—and difficult to dislodge. Apologetics can help overcome these stubborn preconceptions which pose false obstacles to conversion.

Third, apologetics increases the Catholic’s own confidence and love for his or her faith. Reasoned argumentation can help us appreciate the beauty of our religion, the scriptural and rational roots of its doctrine, the proportion and balance and interplay among its various teachings. Perhaps even more importantly, apologetics can help us understand and respect the arguments made against our faith, giving us a wider vision and more generous approach to those who disagree with us. Our intellectual opponents are not personal enemies. The vast majority are not malicious or slow-witted. At the same time, their arguments against Catholic doctrine are not unanswerable. It is true that sometimes in a conversation, we do not know to respond. Sometimes, in fact, our best answer will be, “I don’t know, but I’ll find out!” It is apologetics that gives us that confidence because we know that we will find out. We are certain that someone, somewhere, has deeply considered the objection already and addressed it calmly and thoroughly.

It should be cautioned that apologetics is an intellectual instrument that, like any instrument, can be used or misused. The goal of these dialogues is not to vanquish an opponent in a debate. If we wield apologetics like a club, we will probably find ourselves welcoming very few friends into full communion with the Catholic Church. And we may well find ourselves falling deeper and deeper into the sinkhole of spiritual pride.

St. Peter said that we should “be prepared to make a defense to anyone who calls you to account for the hope that is in you,” and then he added, “yet do it with gentleness and reverence.” Our explanations of the faith must be done calmly, rationally, and charitably. That is how we show reverence both for the doctrines themselves and for the sacred ground that is the human soul. Zeal for the faith is admirable and must be fostered, today more than ever, but how tragic it would be if the outburst of our own zeal became the very obstacle for another soul in its encounter with the Lord.

Our Blessed Lord called himself “the Way, and the Truth, and the Life” (John 14:6). It seems to me that this is not simply a listing of three characteristics but rather an itinerary in itself. The “way” of discipleship reaches eternal “life” because each touches the “truth” of the Gospel. May these pages contribute to a deeper love for the faith we hold dear, a firmer desire for others to embrace it, and a greater boldness to speak about our beloved Jesus and his life-giving doctrine so that more and more souls may walk on the way of truth towards the joy of eternal life. 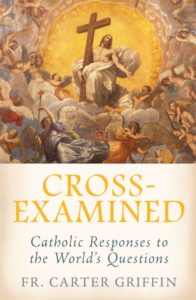 While social norms and political movements are rapidly changing, the truth of the Catholic faith stands firm. In Cross-Examined: Catholic Responses to the World’s Questions, Fr. Carter Griffin equips us to address even the most sensitive topics, from the existence of God to the existence of hell, from women’s ordination to Marian devotion, from assisted suicide to transgenderism.