Why We Should Be Proud to Be Catholic

Regis Martin is the author of over half a dozen books, including The Beggar’s Banquet: A Personal Retreat on Christ, His Mother, the Spiritual Life, and the Saints. With his trademark mastery of the English language, Martin leads the reader to contemplate the wonders of God and the Catholic faith.

There are two wonderful and lasting legacies of which the Catholic Church need not be ashamed; indeed, she may trumpet them full-throatedly before the world. So surpassing is their value, so indefectible her possession of them, that neither folly nor wickedness can ever deprive her of their use. One is the Deposit of the Faith itself, which the Church is to preserve and defend because it comes to us from the Apostles, who received it from the hand of God Himself. The other patrimony is the poor and dispossessed, who likewise come to us from God, His Son having identified with them in the most profound and intimate way.

These, then, are the two abiding sources of Catholic wisdom and wealth and splendor, the repository of the Church’s greatness, without which she is nothing. The story is told of a priest who witnessed St. Francis Xavier saying Mass in India four centuries ago, a somewhat unusual liturgy at which row upon row of lepers sat waiting to receive God in Holy Communion. A fastidious fellow, he appeared quite shaken by the sight, horrified by so impacted a gathering of grotesques before the altar of God. But when Father Francis motions to him to help distribute the Hosts, he is moved by a sudden grace and manages serenely to overcome his aversion, and so the story ends happily. The point it makes plunges us straightaway into the Mystery of Incarnation, whose sublime meaning the Church has always treasured, telling us never to shrink from applying it to our own lives. That in the sight of God we are all lepers, and that Jesus Christ Himself became one in order to set us free.

One of the reasons I am so drawn to the stories of Flannery O’Connor, is because they are filled with freaks. And lepers. Raving lunatics and liars, misfits of all manner of misery. Why would she want to write about such people? What is the point of filling page after page with the diseased and the demented; can so redundant a documentation of human swinishness be entirely healthy? Why this obsessive preoccupation with the violent and the grotesque? With the dark city where, she often said, the children of God lay sleeping? It was a question often put to her. Her answer was wonderfully disarming: “Because I am still able to recognize one.”

How does one do that? “To be able to recognize a freak,” she tells us, “you have to have some conception of the whole man, and in the South (which is the region where she grew up and chose to remain) the general conception of man is still, in the main, theological . . . while the South is hardly Christ-centered, it is most certainly Christ-haunted. The Southerner, who isn’t convinced of it, is very much afraid that he may have been formed in the image and likeness of God.” That is why the freak is given so striking a prominence in her stories, because when deployed in just that way we, the reader, are enabled to see in him “a figure for our own essential displacement,” and thus “he attains some depth in literature.”

Years ago as a soldier sent to Saigon, South Vietnam, my presence there proving entirely ineffectual in preventing the collapse of the American war effort, I fell in with a wonderful old priest, who managed to recruit me to help out on Sundays at the local cathedral. In order to reach the safety of the sanctuary, however, we needed to negotiate our way across a sea of human refuse . . . wave upon wave of suffering humanity—cripples, orphans, widows, beggars—those whom Christ especially identifies with in His outreach to the poor and dispossessed. What a far cry it was from the cheery suburban Catholicism of my misspent youth!

In other words, if attachment to Christ means anything, then every human being who ever existed, in whatever form of ugliness or destitution or imbecility, is to be included in the embrace of God, welcomed with open arms into the house of God we call the Church. This is central to the whole Pauline idea of mystery, around which the Second Vatican Council had woven its tapestry of what it means to belong to Christ, to His Bride the Church. And what it consists of is this profound sense of identity between the Work and Person of Christ back in first century Palestine, and the building up of the Body of Christ in this twenty-first century post-modern world. This is the equation we simply must accept between the institution whose membership we claim today, and the reality Christ first revealed to the world He suffered to redeem more than twenty centuries ago. 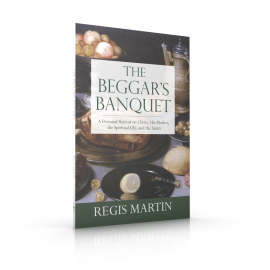 Regis Martin’s The Beggar’s Banquet is a feast of reflections on God’s love. In thirteen discourses on Christ, His Mother, the spiritual life, and the saints, the author rekindles the familiar Gospel message with ever-deepening wonder, whetting the appetite for that which alone truly satisfies: the Bread of life.