Fr. Ian Ker is the leading expert on the life and works of John Henry Newman. He is the author of several books, including Mere Catholicism.

Catholic Christianity believes that the identity of Jesus Christ is similar to the nature of God in the sense that both are mysteries which are beyond full human understanding. Just as God is one and yet three persons, so Jesus is both divine and human at the same time. And not partly divine and partly human, but fully and truly God and fully and truly human.

The mystery, however, will appear less impenetrable if we recall that humanity is made in the image or likeness of God, so that the more really human a person is, the closer he or she will resemble God. In other words, the most human of people will also be the most godlike of people. The more we are in harmony with our real human nature, the more we shall be like God. If, then, there ever existed a human being who was totally in accord with human nature as God intended it to be, that is, like to God, then that person will also presumably be the most nearly divine of human beings. As we have said, to place the human in opposition to the divine is not in accordance with God’s plan. The two are meant to be closely conjoined.

The orthodox Christian view is that Jesus is the only perfect human being who has ever existed. But if so, then He is also the nearest of all people who have ever existed to being God. When we think about it in that way, we begin to see that the idea of someone being both God and man is not, after all, quite so baffling.

The Incarnation was not simply a matter of God coming down to join us on our level, but also of drawing us up to His level. The Fathers called this aspect of the Incarnation the deification or divinization of human nature. In the unique case of the Incarnation, God doesn’t just come down to our level in an external and momentary kind of way. It’s true He doesn’t cease to be God—if He did there would be no point in the exercise—but He does truly become human. He doesn’t dress up in a sort of disguise, pretending to be human while actually still staying God, as we do when we impersonate somebody. No, God truly comes down to us because He really takes on our human nature, but He also at the same time, by doing so, draws us up into His life, because He doesn’t cease to be God.

For it was not only that God underwent what we can only call an experience in taking our human nature, but that human nature could not have that happening to it without a radical effect on its makeup. This isn’t something that is easy to explain or understand, but it would be as if we could get right into somebody else and experience exactly what it is like to be that person, to have his feelings and his thoughts. It’s not something, of course, that can ever literally happen, but it’s not impossible in a way to imagine it. In fact, we have an interesting expression to indicate our reaction to somebody intruding in an unwelcome way into our life when we say that so-and-so “is getting under my skin.” We don’t have such a concrete and graphic expression to mean the same thing when it is a pleasant, positive experience. We can only then use the much less physical idea of somebody “empathizing” with us, that is, to recall the Greek meaning of the word, “suffering” or “experiencing” what we suffer or experience. There is, though, the more vivid visual expression of “seeing” right into somebody.

Well, in the Incarnation God does indeed not only empathize with or see into us, but, in the most positive sense, gets under our very skin. He does that by not only literally putting on our human skin, but by putting on all that is part and parcel of being a human person. There is one exception to that, although, as we have already seen, it is not really an exception at all. I am referring, of course, to the fact that the one thing God doesn’t take to Himself, and can’t, unless He were to cease to be God, is sin. But since sin is inhuman rather than human, by sinning the Incarnate God would make Himself less not more human.

If indeed God got into our very skin at the Incarnation, then human nature could never be the same again. It had not only been brought close to divinity, but it had actually been penetrated and impregnated by God. In that case, human nature had now entered into an even more elevated state than the original condition of innocence of sin, since Adam and Eve are depicted as enjoying close friendship and intimacy with God, but with a God who still remains apart and distinct. Through God becoming human in Jesus Christ, human nature receives an extraordinary, radical injection of new, that is, divine life. Human nature, created to be like God, now finds itself invaded by its Creator. When people emigrate to another country and another culture they inevitably have an effect on that society; there is now a new element or ingredient which more or less alters the scene. When God decided to enter the human race, He could not but change the humanity He adopted. Of course, sin remained in the race, and so from that point of view there was still loss rather than gain compared with the original sinlessness of the first creatures. But there was a revolutionary gain, too.

The old human nature remained, sinful and weak. But now there was new hope, altogether fresh possibilities. It was not that the damage that had been done was removed with a wave of a wand. That remained—nothing could change what had so tragically happened. And yet everything could change. Like the injured person carrying his disabilities for life but given a new life immensely better than anything he had ever known even before the terrible accident—so now the human race was renewed in a way that would have seemed inconceivable even in the original state of innocence. It was not just that disabled human nature was given hope that one day things would be all right. Now real possibilities opened up. Human nature suddenly found itself capable of things undreamed of before. 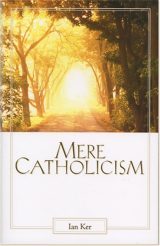 Catholicism can mystify or even repel other Christians, while its complexities can confuse Catholics themselves. Fr. Ian Ker’s stimulating book, Mere Catholicism makes Catholicism come alive as the fullness of Christianity.