How to Read the Acts of the Apostles

The evangelist Luke wrote both the Gospel of Luke and Acts of the Apostles. This means more than the fact that both books share the same literary style, vocabulary, and perspective. They share the same plot. Indeed, Luke begins his sequel to his Gospel by noting how the second work is a continuation of the first, because the life of Jesus is recapitulated in the life of the Church. “In the first book, O Theophilus, I have dealt with all that Jesus began to do and teach” (Acts 1:1). Note the key verb “began,” which underscores that the story of Jesus has not ended but rather has surprisingly taken on a new form in the life of the Church.

This is illustrated by the many parallels between the life of Jesus and the lives of the apostles. For example, Luke highlights how Jesus’ public ministry began with the visible descent of the Holy Spirit upon Jesus, from which Jesus goes forth anointed in the power of the Holy Spirit (Luke 3). The apostles, too, begin their ministry with the descent of the Holy Spirit at Pentecost. Thenceforth they, too, do everything by the power of the Spirit. Thus, Pentecost is to the Church what the anointing at the Jordan was to Jesus: the commissioning for mission in the Spirit. The Church in her own life relives the mysteries of the life of Jesus. In other words, through the apostles and the Church, Jesus continues to act and teach.

How can Jesus still be active, given that He is dead (albeit now resurrected)? This is Luke’s starting point in Acts. Jesus’ Resurrection is more than simply a return of life from death, an escape from mortality in order to vanish into some distant heaven. Rather, His victory over death is followed by a royal Ascension through which He is exalted and enthroned at the right hand of God, from where He sends out His Spirit and begins an active reign. For Luke and the early Christians, Jesus’ Ascension was more than an exit; it was an entry into the heavenly throne room from which He directs the course of history and the life of the Church.

The kingship of Christ and the realm of His dominion, which is the Church, are some of the many themes of Acts. At the outset of Acts, the apostles ask Jesus if now is the time that He will “restore the kingdom to Israel” (Acts 1:6). The question is answered only indirectly, leaving the reader wondering about the nature of the kingdom and its timing. But the Church herself is the reconstitution of the kingdom, and it is a kingdom that bursts the old confines of ethnic Israel. The new Israel is fathered by the spiritual patrimony of the twelve apostles, a patrimony that dramatically reconfigures the twelve tribes of Israel. This point is borne out at the very end of Acts, which ends with Paul proclaiming the good news of the “kingdom of God” (Acts 28:31) in the capital of the civilized world, Rome.

Astonishingly, the Gospel that began to be proclaimed in Jerusalem has now reached the very capital of the Roman Empire, thereby suggesting that the kingdom of Christ is eclipsing Caesar’s kingdom. Undoubtedly, if Paul’s preaching extends the kingdom as far as Rome, Christ’s dominion is already exercised in the life of the Church. In short, Paul answers the apostles’ question by showing that the time of the kingdom has already begun, but its borders stretch out past the limited borders of Israel. The kingdom is not restored to ethnic Israel, but rather ethnic Israel is renewed so as to restore all people into the kingdom of God. Thus the ethnic and geographic limitations set out in the Old Covenant are transformed into the limitless boundaries of the New Covenant, which is universal—that is, Catholic—in scope. This is why Luke ends his narrative with Paul in Rome, for he has demonstrated that the actions of the apostles have fulfilled Jesus’ wish that the kingdom of the New Covenant extend to all peoples and places. Luke’s literary inclusio frames his story of the Church by beginning and ending it with the kingdom motif (Acts 1:6; 28:31).

Luke dedicated his two volumes to a man named Theophilus, which means “lover of God.” Besides the historical Theophilus, each one of us is invited to be a “Theophilus,” a lover of God; and who can help but grow in love for God as he reads about His deeds in the lives of the apostles? 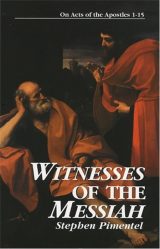 After the Resurrection, the apostles asked, “Lord, will you at this time restore the kingdom to Israel?” Witnesses of the Messiah by Stephen Pimentel will guide you through the Acts of the Apostles and show you how the Church founded upon the apostles is the restoration of the kingdom. As insightful as it is easy to read, Witnesses of the Messiah is ideal for individual or group study.