Fr. James V. Schall was a Jesuit priest, teacher, writer, and philosopher. He was the author of over thirty books, including Catholicism and Intelligence, which challenges the reader to see God in the reality of the world. 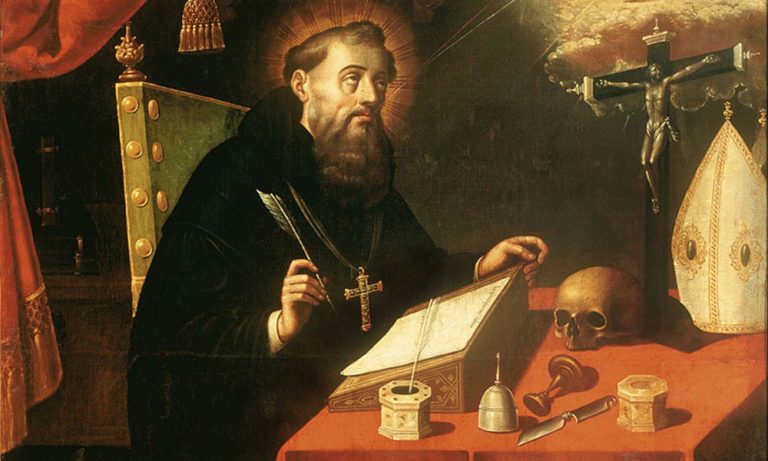 The point of revelation in the Catholic sense is that the world itself exists as an arena in which individual persons, each with a proper name, in their dealings with one another, in whatever time or place, work out their salvation. Salvation does not mean the preservation of at least some men down the ages in this world. Sooner or later, the race of men on this planet will cease. Salvation does recognize that the human species has reproduced itself in generation after generation since its beginning. The numbers of men, seven or eight billion, is a larger number than at any time in past history. The natural goods of the world were placed in the world for man to learn what they are and how to use them. Subhuman goods have no ultimate purpose except through his purpose.

This ongoing dependence on what was given in the planet’s natural richness was itself a function of man’s intelligence and creative capacity. He was not created with everything given to him. He was created, as Aristotle said, not with claws or hides, but with “a mind and a hand” so that he could learn to provide for himself. This implicit power of mind was the initial confidence that God had in creating a rational being within the world.

Yet, all of this given world existed not as man’s purpose to deal with it, but so that, in living in it and dealing with it, he might achieve the personal salvation of each human being, which specifically is to participate in the inner Trinitarian life of God. Too, this suggests not just that the existence of God is central to what we are. We are not given minds just to have minds but that through them we might know the truth of things. This God, moreover, is Trinitarian, a single God with a diversity of persons, a communion or, if you will, a friendship.

Catholicism claims to be true but only on the basis of evidence, reason, and dependable testimony. The claim is now just a blind velleity. If it is just another form of inconclusive humanitarianism that gets along with everything because it distinguishes itself from nothing, it is not worth paying much attention to. It is not just another relativism or unfounded opinion. Thus, it cannot avoid dealing with positions that claim it to be false. The title of a book of mine is, precisely, The Mind That Is Catholic. Catholicism is an intellectual religion. It is not credible if no case can be made for its validity. The final words in Chesterton’s 1905 book, Heretics, were that the last defenders of reason in the modern world would be the believers in that distinct revelation that alone is directed to reason.

If my understanding of the modern mind is accurate, we have already reached the point that Chesterton saw over a hundred years ago. Catholicism almost alone defends reason that is based on the integrity of the mind related to what is. We are the last to hold that it is a given world that we do not create of our own minds. Yet, with these same minds, we do discover and articulate what is. In a world of institutionalized relativism, any claim to truth is chastised as arrogant or fanatic. Catholics seem like braggarts who doubt the modern mind’s basic prejudices—and they do.

This claim to truth, both of reason and revelation, does drive the modern world precisely crazy. As implied in John’s Gospel, truth incites the persecution that Christ told His disciples to expect. Catholicism’s most reasonable teachings sound crazy in a world that denies any order in nature or in the human being that is not placed there by man alone. It also sounds crazy to those who have habituated themselves to accept aberrations like abortion, internet addictions, divorce, and fetal experimentation as normal, when they merely mean they are frequent. But even the word “crazy” has no meaning if no order or no normal can be found with which to compare it.

In the Divine Office for Trinity Sunday, St. Athanasius (d. 373) speaks of the inner life of the Godhead. This is the teaching about the reality that most challenges our reason to be itself more reasonable. Athanasius advised us to consider the ancient, traditional teaching of the Catholic Church. It was revealed by the Lord, proclaimed by the Apostles, and guarded by the Church fathers. If we lapse from this teaching, we would not be Catholic either “in fact or in name.” We are, no doubt, in a world filled with lapsed Catholics, a world that usually rejects any proposition that even claims to be true.

To reject revelation somehow makes us less capable of knowing and seeing what is. From the beginning era, we were told what we needed to know for our salvation—itself the purpose of the Incarnation—that we hear, that is, understand the Word now made flesh so that we can be spoken to in our languages. God was not negligent by not telling us more. He did not reveal every last detail so that there was nothing left for us to figure out for ourselves. One can hardly overestimate the importance of this fact. He left wide spaces for us to use our own brains. This revelation about God’s inner life was given to us. As a consequence, we also come to know more than we could have known about everything else. 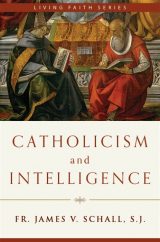 Catholicism and Intelligence is a collection of essays that challenge the reader to see God in what-is, in the reality of our world. Engaging some of the finest minds of the past—Chesterton, Plato, Augustine, and even Charlie Brown—Schall speaks to the present with incisive clarity, illustrating how revelation informs and strengthens the natural light of reason, enabling humanity to see reality most clearly. Catholicism and Intelligence affirms that a truly Catholic mind is radically and uniquely capable of sifting through competing worldviews.